Tucker’s Keeps Thriving On the East Side 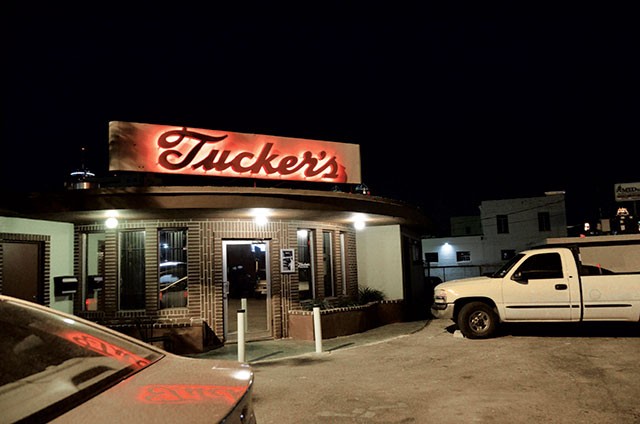 Tucker’s Kozy Korner knows a thing or two about change. Originally a food stand, the bar has seen its share of identities since its inception some 66 years ago. By the ’70s, what started as a humble hotdog and burger joint had evolved into a cool, no-gimmicks cocktail lounge.

Blocks away from downtown and a hop-skip from Sunset Station, Tucker’s has been THE bar for mingling since its first heyday. While visitors vary based on what day of the week it is (Monday and Tuesday nights welcome a chill crowd, while Friday and Saturday eves mean putting your best dancing shoes on), there’s a harmonious undercurrent within.

In 2011, several owners after the original Tucker, the bar returned to its burger roots with the addition of Cullum’s Attaboy Burgers. Owned and operated by Chris Cullum (formerly with the Landing and Bunsen Burgers), Attaboy worked out of Tucker’s kitchen and sated bellies of hungry bar-goers with its menu of scratch-made buns, thick patties and nom-worthy topping combinations. Don’t get us started on those sweet potato fries.

Tucker’s is about to change some more with Cullum now at the helm as owner. The burger boy purchased Tucker’s from previous owner Greg Bickerstaff at the end of December and has slowly started implementing his own take on service and bar life since January 1.

“I’ve been here. We’re getting old customers back, ’cause they know the service that my father and my family are famous for and how we operate,” Cullum said. While he hopes to eventually add a new lineup of Southern-tinged cocktails, Cullum is preoccupied making necessary changes to the decades-old building.

“We’re still cleaning the gutters and getting everything where we need to be operationally,” he said of the process.

Aside from the revamped patio and new outdoor bar, the interior is also getting some love with the addition of a new sound system designed by DJ JJ Lopez. As the son of Jim Cullum Jr., Cullum grew up listening to both his father and grandfather and their renowned takes on American jazz, so the genre will remain at the bar on quieter evenings, while DJs keep spinning Wednesday-Saturday nights. To cap the musical offerings, Cullum purchased a 1978 see-through jukebox, which will be curated by Lopez.

As he continues tweaking his existing menu to make room for “South Soul” eats (this also means the addition of a gospel brunch), Cullum is still catering to a jazzed (pun intended) audience that’s ready for the next iteration of this East Side establishment, whatever that may be.