Tuk Tuk Tap Room Will Close This May 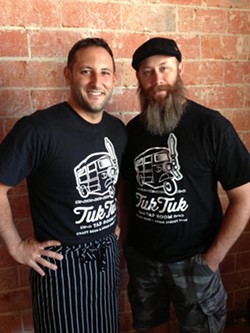 The Southeast Asian options are getting a little more limited this May. Steve and Jody Newman along with partner chef David Gilbert (James Beard semifinalist, of Tuk Tuk Tap Room (1702 Broadway) have announced the closing of eatery this May 16. The eatery opened September 2013.

According to a press release sent by the Newmans, JS & WS, a company owned by Steve, will sell the building which houses Tuk Tuk.

The restaurant will run normal business hours through May, 16; 5 to 10 p.m. Tuesday-Thursday, 5 p.m. to midnight on Friday and Saturday and 11 a.m. on Saturdays for Pajama Dim Sum brunch. A final Full Moon Dinner will be held May 14 at 6:30 p.m., featuring the brews out of Ballast Point Brewing. Email manager Winnie Mak (who will head to Brass Tap at The Rim) at [email protected]. Most of the remaining employees will be absorbed into the Newman's other business including B&D Ice House, The Friendly Spot and Alamo Street Eat Bar.

"My husband Steve, Chef David Gilbert and I took an opportunity, in what I would say is “the land of opportunity,” to open Tuk Tuk Tap Room in September 2013. Tuk Tuk is a bold idea with a uniqueness all its own. It’s the collision of Asian Street Fare & Craft Beer at the intersection of Broadway at Pearl Parkway. It’s so fun!" Jody said in a press release. "In the past 2 years, our block has changed hands multiple times. We’ve stayed up to date and are aware of the proposed progress....Steve has been approached multiple times over the past year by developers who are looking to bring a large-scale development to our “1700 Broadway” block.

David and I starting speaking a year ago about Tuk Tuk being surrounded by construction, street closures and ultimately big walls. We had 2 choices: Be the lone hold-out or close at our current location. A year later, we have chosen to become a part of the inevitable, amazing development that will be the block of 1700 Broadway and close Tuk Tuk Tap Room at 1702 Broadway. We are exploring locations, including re-opening in the proposed development. There are lots of options."

Head over to enjoy the oodles of craft brews on tap, chef Dave's Thai-style fried chicken and more while you still can.