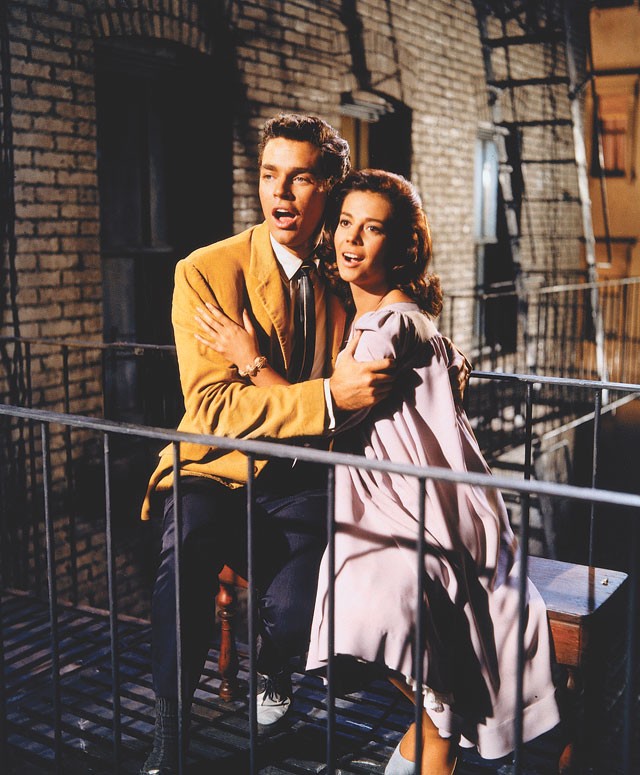 Three familiar piercing whistles and an abstract skyline herald the beginning of this modern Romeo and Juliet masterpiece. After the rather lengthy instrumental prologue (or so I thought as a child), the camera veers into New York City delivering aerial views of a concrete jungle of tenements and ultimately honing in on a group of young white men, rakishly leaning against a chain link fence and casually snapping their fingers in time with the music. The gang begins strolling through their territory, the pedestrian prowling gradually developing into a dance of dominance so seamlessly that the viewer never stops to think, "So are these thugs going to pirouette me to death or what?"

This is the magic of West Side Story, a classic Shakespearean tragedy in a contemporary setting that manages to utilize song and dance to enhance the raw emotions of the characters. The saga follows the antagonistic relationship of two rival gangs in the tough streets of Manhattan: the Caucasian Jets representing the Montagues and the Puerto Rican Sharks embodying the Capulets. From these two households arise "a pair of star-crossed lovers," Tony (Richard Beymer) as a former Jets' gang member and best friend of the Jets' leader Riff (Russ Tamblyn), and María (Natalie Wood) as the sister of the Sharks' jefe Bernardo (George Chakiris). These two impossibly pretty people meet at a dance in the local gym and it is love at first finger snap. Immediately, the gangs are up in arms over the interracial romance, fatalistically careening down a chasm towards mutual destruction.

The audience will recognize the familiar plot, but what makes this movie an essential film is the music. Leonard Bernstein and Stephen Sondheim created a memorable score with gems like "María," "Gee," "Officer Krupke," "Tonight," and so many other classics. Granted, most of the main characters do not actually sing a note with their own voices, but the power and sheer catchiness of the score is impossible to deny. Equally impressive is the choreography by Jerome Robbins, who elected to stage the dance sequences in more realistic settings to fit the gritty quality of the movie.

The 50th anniversary of this cinematic treasure merits a certain amount of fanfare, and Turner Classic Movies happily delivers with a one-night showing of the film nationwide, a fitting tribute to a movie that won 10 of 11 Oscar nominations, including Best Picture — the most for a movie musical ever. Think of it as an excuse to "feel pretty" all over again.