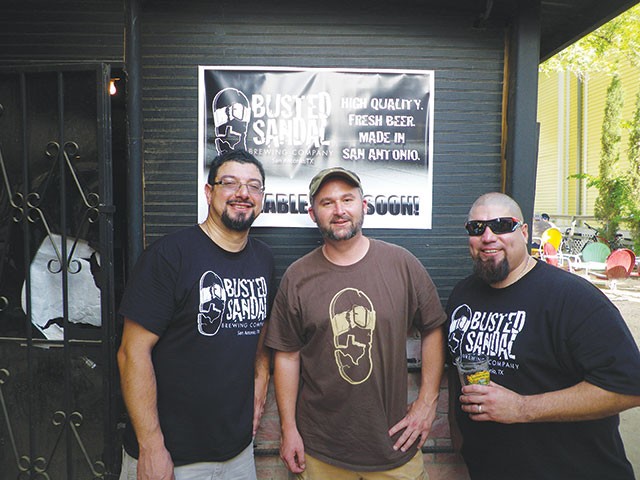 5 Stones Craft Brewing Co., owned and operated by longtime homebrewer and area native Seth Weatherly, sits just outside 1604 at 850 Schneider Drive in Cibolo. For Weatherly, who’s not quitting his day job, owning a brewery is more passion than surefire money maker. “A friend introduced me to homebrewing years ago and I just fell in love with it, especially the creative aspect of it. I found myself brewing almost every weekend and just couldn’t do it enough,” said Weatherly, who began doling out samples of his malted concoctions to friends and family members, and was encouraged to get serious by their positive feedback.

So why the name 5 Stones Brewing Co.? Weatherly took a page from the biblical story of David and Goliath for his brewery’s identity. Seeing how massive the overall beer market has grown, he was in awe of the uphill battle that he and other small breweries now face. “When coming up with a name, David and Goliath stuck with me and most know David killed Goliath with one stone, but I wondered, how many stones did he actually pick up to take on Goliath? He picked up five,” said Weatherly.

What’s unique about Weatherly’s three-barrel operation is that he doesn’t look to have a year-round line-up like most manufacturers. Weatherly plans to brew by the season, offering around four core releases for fall, winter, spring and summer. At the moment 5 Stones’ staple beer is the Aloha Piña, a golden ale brewed with fresh pineapple and roasted jalapeños.

Weatherly says the their regular open house dates vary, but are most likely to be the first or second weekend of each month. For now, 5 Stones is available to the public at Gabriel’s Superstore at 1604 and Blanco, Twin Liquors Marketplace at 281 and Bitters, all four Spec’s locations in San Antonio and Pizza Italia (3023 Thousand Oaks).

Down the interstate a ways from 5 Stones, in the heart of Medical Center at 7114 Oaklawn Drive, sits Busted Sandal Brewing Company, co-founded by friends and IT veterans Michael DiCicco and Robert Garza. What began as a shared dream in 2001 has finally become a reality more than a decade later for the two buddies. As the guys will tell you, their love for quality, hand-crafted beer knows no bounds, but the brewery also means more to them than that.

DiCicco and Garza want to protect the environment as responsible business owners. The brewery’s all-electric 10-barrel alehouse includes a tank-less flash water-heating system, and they use chemicals that are more environmentally friendly for cleaning and sanitizing. Plus, Busted Sandal is powered by Windtricity®, a CPS initiative that brings renewable, wind-powered energy to homes and businesses.

Their core lineup will include Slippery Rock IPA, El Robusto Porter and Fire Pit Wit. While these brews seem like safe choices for regular offerings, it’s also a smart move. Sometimes opening with solid representations of traditional styles gives you a better chance of succeeding with the average craft beer consumer. “We’d love to open with something outrageous, but we want to establish ourselves and our brand before getting too crazy,” said Garza. Busted Sandal looks to brew on a small commercial scale while maintaining a personal touch and staying true to their homebrewing roots.

These new brewers have great enthusiasm for their suds and it shows. Next time you’re itching to try a new handcrafted brewski, visit either brewery and welcome them to San Antonio.