The YouTube election’s over, FOX has officially lost its Gallup grip, and so begins the rise of MSNBC. Keith Olbermann is veraciously counting down the first 100 Hours of the Congressional session while Joe Scarborough cocks the starter pistol to signal the head-on chicken game between Bush’s soldier surge and Congress’s budget hostage-holding. Even Trent Lott can’t dodge Hardball’s condemnation of Bush’s Iraq strategy any more than he can duck host Chris Matthew’s mouth-spray.

But it’s not merely the teleprompter reflecting in the eyes of our federal lawmakers; it’s a new-era sparkle, the glimmer of national redemption. In addition to escaping the Iraq Trap, congressional Democrats plan to suppress the power of lobbyists, raise the minimum wage, repair Medicare’s prescription-drug program, roll back billions in Big Oil subsidies, and implement the 9/11 Commission’s recommendations. Congress will be a blast this term. You can sense it the same way you can feel apples ripening and bunnies being born. America feels Zestfully clean.

Locally, the Texas Legislature experienced nothing so dramatic as Congress’s 180. However, Democrats did pick up five Texas House seats and with a budget surplus estimated between $8 billion and $15.5 billion, the 80th regular session is set to be stellar. You can watch the Lege online, but it’s more like screening soporific security-cam footage than Celebrity Big Brother. If only we could get local broadcast-news producers to sex it up a little.

If we were pitching it to the network execs, here’s how the Current would sell our lawmakers in Austin.

Premise: On a day-to-day basis, Michael Villarreal is a young, humble financial expert just trying to drum up capital in San Antonio. However, when he enters the state Capitol, the world goes toony in the tradition of Cool World and Who Framed Roger Rabbit? Stepping through the doors of the Pink Dome, Villarreal morphs into a super-powered PE-instructor-style state representative ready to rescue recess from elimination by the TAKS gestapo. Equipped with a time-stopping whistle and an enchanted hula-hoop (Spoiler: For the season finale, he’ll have a giant beach ball and a parachute), Captain Recess is championing recess-friendly HCR 24 and HB 366 — “The  Freedom to Play and Learn Act” — allowing local school health-advisory councils to study the benefits of playtime. In order to succeed, however, Captain Recess must also push through HB 111, a $100,000 cap on what an individual can contribute to a political campaign, hence keeping all-work/no-play millionares from single-handedly electing anti-recess legislators. As a result, this will seriously piss off big spenders James Leininger, Bob Perry, and John O’Quinn.

Premise: Frank Corte is a pro-life legislator who wants to control Texas’s women and health professionals. With HB 21, he wants to deny women the ability to review abortion warnings privately on video, and instead force them to hear it directly from the doctor; with HB 23, he’d force pharmacists who handle emergency contraception to post “If you believe that life begins at fertilization ...” warnings.

We can spin that last one as a sideways slam at fellow San Antonio legislator Leticia Van de Putte, who’s both a woman and a pharmacist. She’s also the women’s and children’s health advocate behind SB 92, which would classify bulimia and anorexia as “serious mental illnesses” under the Texas Insurance Code. She’s also backing a proposal for human-papilloma-virus vaccinations for young girls (representatives Jessica Farrar and Joe Deshotel have filed bills HB 215 and 146 respectively).

We know we haven’t sold you yet, but maybe we can fan this spark into a full-blown inferno. If we bait Corte enough, we can probably catch him saying on-record, “Leticia’s a person that’s very lucky to have a husband and she’d better be careful or I’ll send one of my friends over to pick up her husband. Why would he stay with Leticia if he had another choice?” How awesome would that be? In the end, Van de Putte and Corte would reconcile with their companion bills SB 90 and HB 17, calling for a pilot program to provide electronic ballots to Texas soldiers overseas.

Subplots: While unscrupulous scandal-peddlers like us feed the feud, Van de Putte battles the Republican leadership to take $79 million from the surplus to restore health coverage to 200,000 children. The money would then be matched three-fold by the federal budget. Meanwhile, Corte guest-stars as a villain on a Captain Recess afterschool special with HB 25, a kegger-curbing bill to jail adults busted a second time for selling alcohol to minors.

Category: Primetime Programming (To be re-run indefinitely on three or more cable stations)

Premise: In the criminal-justice system, sexually based offenses are considered especially heinous. In Texas, the dedicated senators who legislate these vicious felonies are members of an elite faction known as Jessica’s Lawmakers. Donk-donk. Senate floor, Austin. Having campaigned successfully for reelection on a kill-all-repeat-child-rapists platform, Dewhurst is now Senate President and determined to pass Jessica’s Law, a Bill O’Reilly-endorsed, sex-offender-punishment proposal that includes a mandatory 25-year sentence for repeat child molesters. Dewhurst can’t introduce legislation on his own, but he’s got a team of senators under his command. They include: “2005 Crimefighter of the Year” Bob Deuell, who’s sponsoring SB 68 to make a second child-rape charge a capital offense; hard-nosed Democrat Rodney Ellis, whose SB 97 would remove the statute of limitations for certain sex offenses; and Florence Shapiro, who ushered through a series of “Ashley’s Law” sex-offender bills in previous sessions.

Subplot: Though the senate plans to ram through tough-on-sex-crime legislation, they’ll also have to consider easing up on low-level criminals. The prison population’s brimming again, and a damning Sunset Review of the Texas Department of Criminal Justice revealed the Pardons and Parole Board wasn’t following its own rules.

Premise: Exiled to the remote Agriculture Committee for voting their consciences (and against bully Speaker Tom Craddick), city-slickers Jessica Farrar and Lon Burnam attempt a risky break-out back into the realm of livestock-free hard politics. Farrar has introduced two surefire gambits to spur the farm lobby to oppose her reappointment: HB 297, which removes livestock exemptions in animal-cruelty statutes, and HB 299, which demands stricter testing for mercury in fish. If her strategy works, it may win her a position on a committee that will help her pass HB 307, a bill fighting for the rights of gay and transgendered individuals in the workplace.

Burnam’s only released two bills so far, both also pond-splashers. With HB 395, he wants to implement re-regulation of electric utilities. He’s also putting his Law Enforcement Committee seat on the line with HB 418, which would limit the use of TASERs by police officers to deadly force-only occasions (SAPD began carrying them in December). 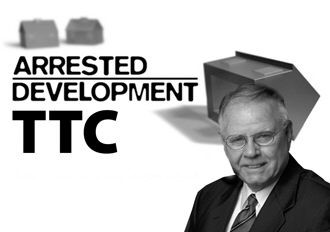 Category:  Primetime series to be cancelled despite widespread popularity.

Premise: The trials and tribulations of a motley crew of lovable bipartisan legislators struggling to save their constituents’ properties from state seizure by the governor’s Trans-Texas Corridor and toll-road plan. Solomons’s HJR 12 would make it illegal for the state to take private property in order to hand it over to other private developers (take that Cintra-Zachry). Jackson’s HJR 30 allows property owners (or their heirs) who’ve lost property to get it back at the original purchase price if the TTC is cancelled. More powerful though is Jackson’s HB 217, which states that original property owners (and, again, their heirs) have 20 years to repurchase the land if the state can’t show progress has been made every five years. The loftiest bill, however, is Pickett’s HB 154, which would make the head of the Transportation Commission an elected official instead of a pawn appointed by the governor. The proposed dismantling of the TTC project, if passed, will likely die under Perry’s veto pen.

NETWORK PREMIERES ... because what’s a season without some first-run films?

FLUSHED AWAY
While no official bill has been floated yet, Senator Jeff Wentworth has reportedly provoked a whirlpool of ire from environmentalists with his idea to increase Edwards-Aquifer pumping. Right now, the limit is 450,000 acre-feet, with a reduction to 400,000 acre-feet scheduled for 2008. He thinks it should increase to 549,000 acre-feet.

TRAINSPOTTING
Representative Ken Paxton’s introduced HB 224, a bill to create a “Choose Life” license plate — it’s a spin-off from the 79th session. Everybody who orders one would be contributing $25 to a Choose Life Fund, which buys Iggy Pop tickets for Scottish heroin addicts. Just taking the piss, mate. It’s a pro-life fund for religious and secular organizations who assist pregnant women considering adoption.