September 25, 2019
comment
The Texas Department of Transportation plans to expand Loop 1604. But first, it wants to hear what you have to say about the idea.

The department held a meeting Tuesday evening to explain the project, which was prompted by congestion on the highway between Bandera Road and Interstate 35. The billion dollar project, expected to begin in early 2021, would broaden the highway from four lanes to ten.

Residents who missed that meeting can get in on Wednesday's session at the Brandeis High School cafeteria from 5 to 7 p.m. 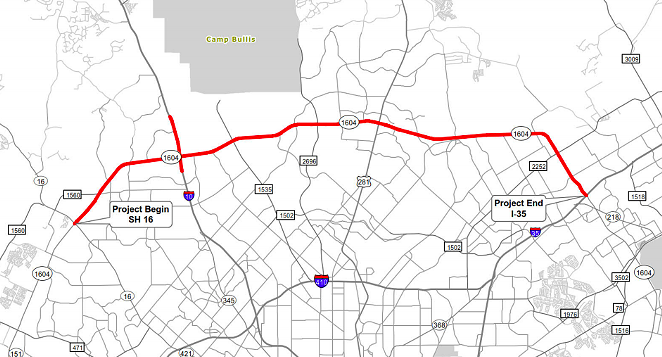 Under the proposal, four lanes would go in each direction while two HOV lanes would be set aside for carpoolers, TxDOT spokeswoman Laura Lopez said. The department also has plans for the interchange at Loop 1604 and Interstate 10.

Though the changes could have SA's highway system feeling more like a major city's, the proposal doesn't include any tolls. Additionally, the project would include accommodations for bicyclists and pedestrians while including protections for water quality.

"We will have schematics, we will have an animation and boards that people can see what we are proposing," Lopez told KSAT.

Residents can read more about the project online. They're also invited to send feedback by Thursday, October 10.
See related PDF Loop_1604_Notice.pdf Stay on top of San Antonio news and views. Sign up for our Weekly Headlines Newsletter.