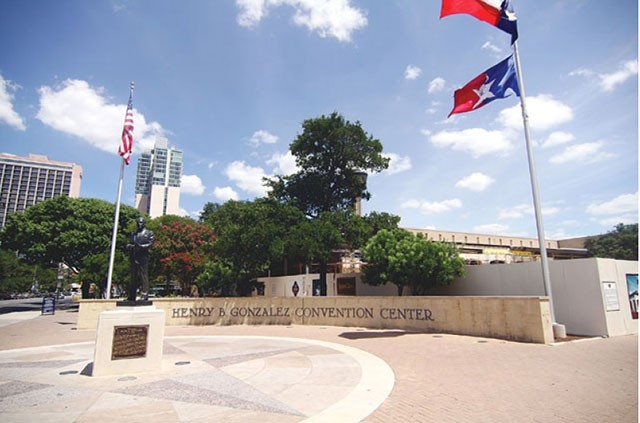 Local organizers with Unite Here, a union representing hospitality workers and the scourge of downtown's Grand Hyatt, smartly began to change gears last year, switching focus to an issue that touches not only service workers but customers of downtown hotels and restaurants as well. Organizers claim the Hyatt has for years been misleading guests and skimping workers, pocketing a 22 percent “service charge” for banquets and events rather than tipping out workers. What's worse, organizers and Hyatt workers have claimed, is that the hotel actively tells workers to lie to inquiring customers and call the charge a tip when it is anything but.

In December, Unite Here volunteers fanned out across the River Walk to gauge support for a local Tip Integrity Act, or “Mi TIA,” as the group calls it, which would require the Hyatt and others to disclose to customers exactly what happens to the service charge — Los Angeles and six other states have passed similar disclosure requirements in recent years. Hoping to make it a River Walk-wide issue, rather than just another campaign against the Hyatt, Unite Here organizers began surveying workers at other downtown businesses to determine whether shady tipping practices plagued the entire industry.

“We didn't exactly expect to find it happening in a city-owned facility,” said Mike Kaib, a local Unite Here organizer.

UTSA professor Ben Olguin says the American Studies Association, of which he is a member, paid a “substantial, hefty service charge” when it chose the Henry B. Gonzalez center for its 2010 convention. The association believed it was tipping workers, he says.

“The ASA feels cheated, deceived, and angry,” Olguin said, reading a letter on behalf of the Association. “If it's not a tip, at least let us know that,” he said.

Organizers also scoffed that, as per its contract with the RK Group, the city reaps 23 percent of food-and-beverage revenues from the Convention Center, “an almost dollar-for-dollar payoff,” said Danna Schneider, another Unite Here organizer. “We're asking that city leaders take this seriously and that they look into it.”

Several local elected have already signed pledges of support for the Tip Integrity Act, among them Bexar County Commissioner Tommy Adkisson and state Sen. Leticia Van de Putte. The group hopes to get downtown Councilman Diego Bernal, who last year told the Current the issue was “certainly an ethical and moral” one, to carry the ordinance through City Hall.