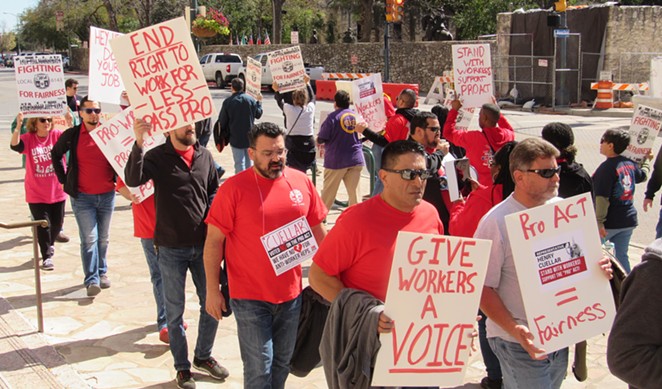 More than 30 members of the Communications Workers of America and other unions protested outside U.S. Rep. Henry Cuellar's downtown office Friday, decrying his recent vote against a bill protecting workers' right to organize.

Cuellar was one of just seven House Democrats to vote against the Protecting the Right to Organize (PRO) Act, which would enact strong penalties on businesses that block employees' efforts to unionize.

"By voting against the PRO Act, Henry Cuellar made it clear that he stands against the power of working people to organize and collectively bargain," Texas AFL-CIO Secretary-Treasurer Montserrat Garibay told protesters outside the congressman's office. "At the time when millions and millions of workers need strong unions to improve the quality of our lives, Henry Cuellar voted to keep power in the hands of corporations and wealthy interests."

Cuellar — one of the most conservative members of the House Democratic caucus — said in a written statement that he supports workers' ability to organize. However, he opposes language in the bill that holds corporations responsible for infractions by their franchisees. Roughly 1,000 franchises operate in his district, he added.

“I agree with the goals of the PRO Act, but we have major philosophical differences on how to approach the economic problems we see today," said Cuellar, whose district extends from San Antonio to Laredo.

The protest comes as the longtime congressman faces a primary challenge from the left by Laredo attorney Jessica Cisneros. In addition to endorsements from Bernie Sanders and Elizabeth Warren, Cisneros last month picked up backing from the Texas AFL-CIO, the state's biggest labor organization.

“Congressman Cuellar siding with his big corporate donors over working people in our district once again shows why he’s Trump’s favorite Democrat,” Cisneros said in a statement supplied to the Current. “Workers deserve the right to negotiate for proper pay, good working conditions and benefits they deserve.”

Cisneros pointed out that Cuellar’s vote came days after the pro-business U.S. Chamber of Commerce announced a $200,000 ad buy to support his reelection bid.