Unlike the First Movie, Bad Santa 2 is a Miserable, Vulgar Slog 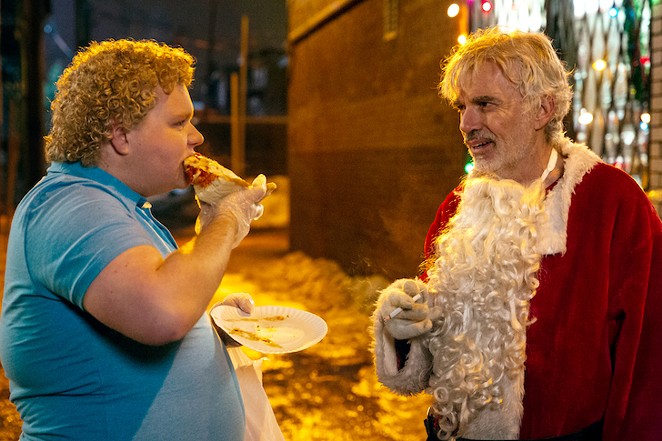 Bad Santa 2 is a bad sequel. It’s a vile, offensive and unfunny movie that does little to build on the hilarious 2003 original, and, as a result, plays like yet another Hollywood cash grab that would’ve been better off not existing.

Wait a minute, you’re thinking: The first movie was vile and offensive and it was great, so what’s the problem here? Director Terry Zwigoff’s Bad Santa was uniquely subversive while somehow still channeling the spirit of Christmas. We didn’t necessarily like Willie (Billy Bob Thornton) and Marcus (Tony Cox) as they plotted to steal from a shopping mall, but we pitied their sad souls enough to laugh at their brazenly vulgar insults. And because we laughed so much at the inappropriateness, many (including me) loved the movie.

Director Mark Waters (Mean Girls) tries to capture that spirit in Bad Santa 2, but fails miserably. It all feels forced, not organic, and consequently is tiring from the opening minutes. This time Willie (Thornton) and Marcus (Cox) are in Chicago plotting to steal $2 million from a charity. They team up with Willie’s mom Sunny (Kathy Bates), whom he hates, and must work around the rigidity of a stuffy security guard (Jeff Skowron) and his boss, Regent Hastings (Ryan Hansen). A wild card is Regent’s wife Diane (Christina Hendricks), who takes an odd liking to Willie.

Reports say actor Brett Kelly gained 40 pounds so he could return as Thurman Merman, a character he originated when he was a kid in the 2003 film. You can’t help but ask why: Plenty of chubby kids grow up to be healthy-weight adults, so why couldn’t Thurman? He wasn’t likable because he was heavy, he was likable because he was sweet and innocent and dumb and you pitied him.

This isn’t even the biggest (no pun intended) problem with Thurman, though. The real issue is that he’s inexplicably loyal to Willie no matter what Willie does or says to him. When Thurman was a kid in the original, this made more sense and worked as a story device. But now he’s 21, literally an adult, and he still acts like he’s eight. Didn’t he go to high school? Have friends? Learn about the world? He’s mentally slow, but not that slow that he can’t take Willie’s clear indication of wanting nothing to do with him. Add to that the fact that Thurman serves no real purpose to the narrative and you have to wonder why he’s here at all.

Speaking of asking “why?”, why cast Christina Hendricks? Her character also serves no purpose. All she provides is someone for Willie to have sex with, and she’s too good an actress for that.

The script by Johnny Rosenthal and Shauna Cross goes out of its way to ridicule little person Marcus. Not only do Willie and Sunny offer up one wise crack after the next, but he’s also laughed at and deemed undateable by an overweight security guard (Jenny Zigrino). Don’t get me wrong – she’s free to date whomever she wants, but as a plot point, we didn’t need Marcus constantly being demeaned because of his size. As if this all isn’t bad enough, the credits cookies take it a disgusting step further.

Dear reader, I beg you: If you have the same fond memories of the foul indecency of Bad Santa as I do, please do not waste your money on Bad Santa 2. It will taint your mind to end every future conversation about the original with “yeah, too bad the second one sucked.” Don’t be like Hollywood – leave well enough alone and avoid this movie.