by Enrique Lopetegui and Joy-Marie Scott 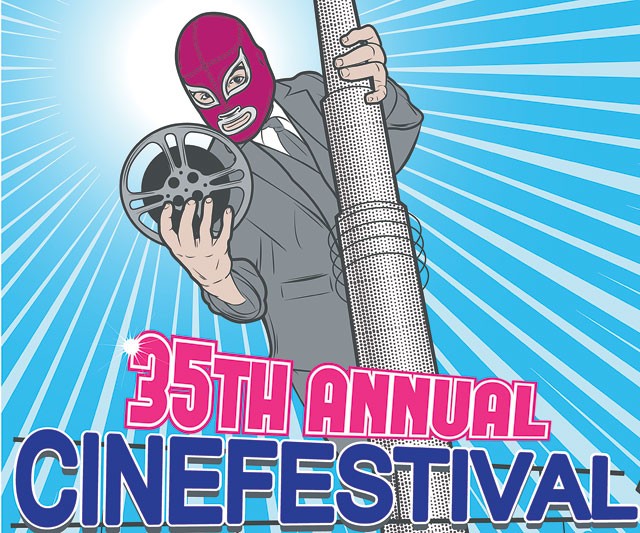 Filmmaker Jim Mendiola's decision to move back to San Antonio after years in Los Angeles is not only good for CineFestival, which he directs — it's good for our film community. Here's a man who understands making movies has very little to do with merely knowing how to use a camera: it is, first and foremost, about writing and acting. And even though I was pleased to see the great reception his Pretty Vacant classic had at Tex Pop last week, I still believe his best movie is yet to come. Just wait.

In the meantime, we can enjoy his good taste in helping other people show their films — all you have to do is take a quick look at this year's strong lineup for CineFestival, the nation's oldest and longest-running Latino film festival.

Here's some of the big treats for this week, but also a heads-up for the following week: The Latino Screenwriters Lab that will meet on February 27-March 2, a joint effort with the Sundance Institute. It is Sundance's first experiment of its kind. The only public event related to the lab will be a panel on Saturday, March 2, at 11 a.m. at the Guadalupe.

"Cinefestival and Sundance are helping to support Latino stories for the big screen," said Mendiola, "a necessity given the lack of Latino representation in film and TV."

Mariachi High
1:30pm Sun, Feb 24 (60 min)
Mariachi High, first shown on PBS and directed by Ilana Trachtman and Kim Connell, is not your usual public television Latino hagiography. It is a fascinating documentary on the world of high-school-level mariachi and the key role San Antonio plays in it. As the first U.S. city where Mariachi Vargas de Tecalitlán (the world's most respected ranchera group) performed, San Antonio will forever be linked to the genre's history. But our city is also part of its present: every year, performing at SA's Mariachi Vargas Extravaganza is the goal of mariachi orchestras from elementary, middle school, high school, colleges, and universities throughout the nation. It is here that U.S.-based mariachis meet to let a jury (led by Mariachi Vargas) decide which is the best.

In 2009, Zapata-based Mariachi Halcón entered the race having won three years in a row. The Zapata High kids were considered heavyweights and the mariachi to beat. But after the seniors graduated, Mariachi Halcón had to regroup. Gorgeously shot, Mariachi High shows the grueling auditions and rehearsals as they are, with no embellishments.

"That was atrocious!" said Mariachi Halcón director and Zapata HS Fine Arts teacher Adrián Padilla, laughing with his team after a candidate badly failed his singing audition. In spite of the insensitive moment, Padilla is a demanding teacher who knows and loves the genre and knows when to stop a rehearsal.

Mariachi High shows Mariachi Halcón's journey from Zapata to San Antonio, and, ultimately, Austin, were they performed at the State's Capitol. It is a story of love of music, heartbreak, and hope. But it also shows, without even trying, the ugly part of it all: these kids (even the lesser mariachis) are genuine artists spending their time on a good thing; yet, they're taught that winning is the only thing that matters.

"When they won, they felt they were doing something," said Padilla at one point. Wrong. Mariachi requires excellent instrumental and vocal skills, and the kids in every single one of these orchestras put on a great show and were always doing "something."

Mariachi High doesn't stress that fact. Instead, it lets the music speak for itself. — E.L.

The Reel Latina wonder
Women-directed films were less than 20 percent of the entries CineFestival received this season (17 out of 88). This is striking, given that Sundance made headlines this year with a record-breaking number of women filmmakers — the number of entries by women matched the number by men for the first time in Sundance history.

In the programming for CineFestival, nearly all of the woman-directed films are documentaries. They don't all focus squarely on women, but they all involve themes of community, labor, family, representation and legacy — themes that women of color instilled in the feminist movement.

Go to sacurrent.com for a complete schedule of films, but here's my two picks for CineFestival's first week:

The Unique Ladies
3pm Sun, Feb 24 (30 min)
Gloria Morán's showcase on lady lowriders, The Unique Ladies, is brazen fun. It's sleek with flashy cars and a fly soundtrack. On display is old-school, shameless chauvinism so outrageous it's laughable. But the women, young grandmothers now, prevail. The short is tight and fresh, belying the span of time (over six years) it took to complete. Morán compares the making of her film to building a lowrider vehicle, made with patient persistence. "Just like the ladies in the club," she comments on her inspiration, "they knew the climate and attitude toward women lowriders, but they didn't care — they kept pursuing their endeavor."

Kristy Guevara-Flanagan's entertaining film debuted at South by Southwest last year. Like an episode of VH1's Behind the Music, the program is a character study, a tale of evolution that engages an Amazon princess, a superhero, a sexual fantasy, and a reappropriated feminist icon. The film features a panel of professors and feminists, including stars like Gloria Steinem, Linda Carter, and Kathleen Hanna, as they map representations of super-power women in the context of women's liberation. Although the film veers didactic, bits of vintage-styled animation make it fun, and mini-portraits of fans like fourth grader Katie Pineda lend emotional texture.

It's a note of hope that in the current class of SAY Sí, over half the students are girls; their films will be featured in the free youth program at 1 p.m. Monday, February 25. In addition, an afternoon panel is dedicated to the screening and discussion of a work-in-progress by Deborah Esquinazi. Wonder Women! makes it plain that fair representation of women in the media involves providing younger generations the tools and training to craft their own diverse images as well as the wherewithal to exhibit and promote their distinct visions. — J.M.S.