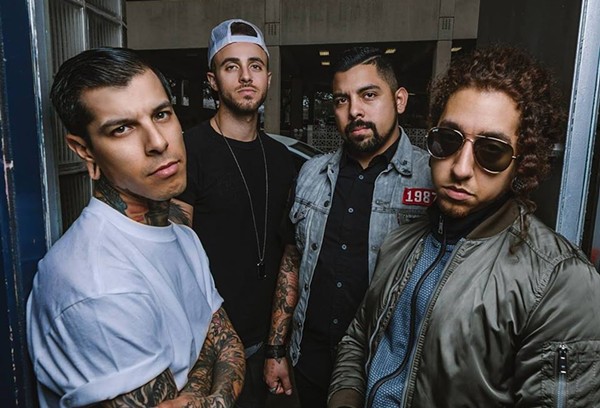 The story of San Antonio metalcore band Upon a Burning Body is one of endurance, ingenuity and work ethic.

After forming in the mid-2000s, the four-piece quickly became a local and regional favorite based on its blend of furious guitar shreddery, hammering drums and emotive vocal roars. Eventually, it signed with Sumerian records, releasing its debut for the influential metal label in 2010.

More releases followed. So did countless tours and spots at metal festivals like Slipknot’s Knotfest, which helped make Upon a Burning Body one of the most successful rock acts to hail from the Alamo City, even if it’s not among the best known.

Now, the band will drop a fifth album, Southern Hostilty, one day before their hometown show at Paper Tiger on Friday, June 7.

But it hasn’t been all record release celebrations and backstage parties, said guitarist and founding member Ruben Alvarez. The secret behind the band’s success has been its sheer determination and a relentless work ethic — ironically, two things that almost caused the band to fold.

“We’d be gone for so long and we’d not be coming home with shit,” Alvarez said, explaining that the band sometimes toured nine months out of the year.

Even with constant touring, the band members couldn’t support themselves with the money they made on the road. When in San Antonio, Alvarez went through a temp agency to find construction work, while singer Danny Leal would take any job he could, including janitorial work.

Those steady paychecks would evaporate once the band hit the road again.

“It almost broke us as a band," Alvarez said. "We were about to call it quits, and thought, 'We have to support our families. We might have to become regular people and get regular jobs.’”

However, around 2015, and near that breaking point, Leal and Alvarez decided to hit reset and fired their management team. They also broke away from Sumerian in hopes that eliminating the middlemen would let the band keep more of the money it made on the road.

“We cut out our manager, we started making our own merch, and that’s what made it work for us,” Alvarez said. “And now we can tour three or four months out of the year — to the markets that are profitable and make sense for us. And, the rest of the time, we get to enjoy life.”

Alvarez and Leal now run the band’s online merch store and print their own shirts. And since, early on, they invested in their own tour van and trailer, they’re able to worry less about expenses and focus on crafting great music.

While Southern Hostility isn’t a gigantic departure from Upon a Burning Body’s traditional sound, the record packs a renewed energy, along with some unexpected transitions and inventive guitar licks. Without completely abandoning the breakdowns that seem to define metalcore, the band seems to have found a way breathe fresh air into a genre many critics feel has run its course.

That’s because the band strove to be intentional in every step of creating the new album, Alvarez explained. It focused on producing anthemic, memorable metal songs with lyrics that would resound with the listener.

“We wanted to ask, ‘What makes Metallica Metallica? What makes Judas Priest Judas Priest?’ And Danny pointed out it was just those metal riffs. All those bands that were iconic — the riffs were the main focus.”

With nearly 15 years in the game, Upon a Burning Body remain hometown heroes. But its longevity also proves bands can see a payoff for their hard work by learning how the music business works and adapting their approach.

“It’s humbling to think about where we started,” Alvarez said. “Me and Danny grew up on the rough side of town. We know where we come from. We came from nothing and we made it work, and we built this band out from literally nothing, no hand-outs, just literally working our way up.”