'Upside Down' defies its own physics 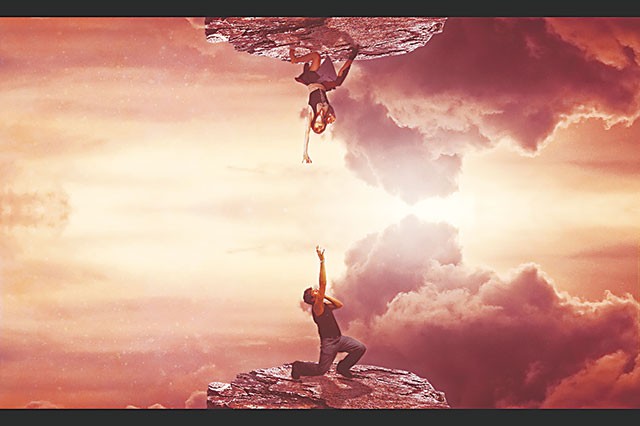 When I was a kid, I used to take my mom’s compact mirror and walk around the house staring down into it, pretending I was actually walking on the ceiling. I’m pretty sure a lot of kids do this, but as far as I know, Juan Solanas’ Upside Down marks the first attempt to adapt that game into a major motion picture. The results are pretty much the same — kind of interesting till you remember there’s way cooler stuff you could be doing.

Upside Down tells the story of Adam (Jim Sturgess) and Eden (Kirsten Dunst), two lovers screwed over by physics in “the only known solar system with double gravity.” That’s two planets sharing one atmosphere and opposing gravitational pulls — one man’s floor is another woman’s ceiling. All of this is explained in Adam’s voice-over narration, which also lays out many ground rules that might be worth reiterating here if they weren’t so quickly discarded, forgotten about, or openly violated without consequence whenever the hell any of the characters feel like it. Though the film’s introduction seems to set up a poorly constructed sci-fi thought experiment, Upside Down is actually a romantic fairytale — Cinderella with a quirky (and, to be fair, pretty cool looking) visual hook and 200 percent more deus ex machina.

Adam is a poor orphan boy from the rough streets of Down Below, where overworked oil field roughnecks die due to gross corporate negligence, and youths risk jail time to steal inverse matter from the rich folks up top (don’t ask; you don’t care) to keep their dilapidated family homes heated. His life is flipped all ass over tea kettle when he, for seemingly no good reason, climbs to the tip top of the tallest mountain he can find, and meets Eden, a right-side-up debutante who just so happens to also have climbed to the top of a super tall mountain on her world at the exact same time! It goes without saying that the two are forbidden by law from ever being in love with each other, but then, get this, they totally do fall in love anyways. Eventually Eden falls back to her world and hits her head on some rocks and Adam’s all like, “No!” And then he gets arrested and goes to prison for a while and he thinks Eden’s dead but then it turns out she’s not. Also, bees make magic pink pollen that can make things (pancakes, mostly) float, but only Adam knows about it.

Both Up There and Down Below are populated with the kind of stock characters who don’t even need names (Helpful Old Black Guy, Heartless Cigar-Chomping Bureaucrat), the kind of crap you should expect from a $100 million fairy tale about class conflict. After spending all of 15 minutes depicting a society where poverty is as difficult to overcome as gravity, Upside Down spends the rest of its runtime trivializing its protagonist’s struggles against both.

“What if love was stronger than gravity?” Adam ponders in the film’s opening moments, and if this kind of talk makes you feel all giddy inside (and you need a decent excuse to ask out Jenny from eighth grade math), then catch a matinee, so you have plenty of time to practice upside-down kissing till your parents pick you up. For the kind of cynical a-holes who go to movies expecting more than a dark place to feel each other up, however, the topsy-turvy thing might not be enough to distract from the film’s almost aggressive indifference to its own storyline. If you can’t decide whether the joys of watching some stuff be upside down while other stuff is right side up is worth watching a thoughtless, mediocre movie, let me save you $12.

[Read while standing on your head.]
ADAM: I’m totally not supposed to love you, but I do anyway! Gravity can suck it!
EDEN: I love you but then I forgot I love you, but now I remember I love you or something! All the blood is rushing to my head and I’m incredibly disoriented. (Passes out.)