URBAN-15 moves to the beat of its own drums 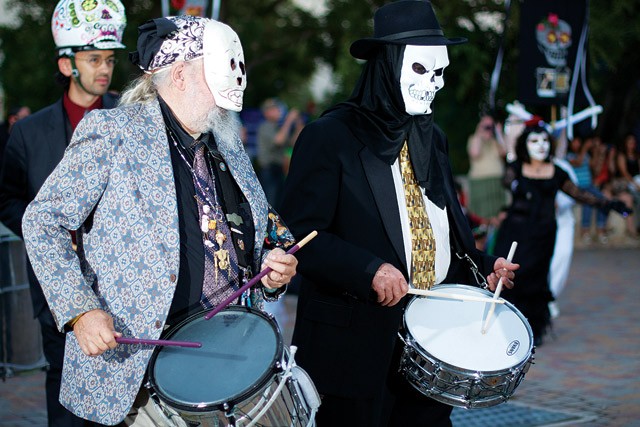 On the corner of South Presa and Dunning Avenue sits a brick building. Nothing to see here, save for a few faded blocks of stained glass. Crickets chirp at a darkening sky as the body shop attendant across the street yawns and rolls down the door for the day. Then, as the sun dips behind the San Antonio skyline, drum beats begin to echo throughout the neighborhood.

Primal sound waves pulse from the building as smiling people hurry towards its entrance; dancing, strutting, all greeting one another effusively as they waltz through the open doors. They are young, old, clean-cut, scrappy, female, male, of all shapes and sizes. They are artists, dancers, drummers, and community members. They are URBAN-15.

"Catherine would do surface painting with tempera paint," says founder George Cisneros of his wife and URBAN-15 co-founder. "Cars would drag it along. With the morning dew it would make for beautiful designs."

U-15 began as an artist co-op in Austin in the summer of 1974 and became a non-profit in 1984. With no official space or restrictions, the original 15 members brought their work to the streets from the get-go. Over the last decade they have drifted from Austin to Houston to San Antonio, with plenty of national tours interspersed throughout. They have performed at avant-garde galleries, warehouses, and lofts throughout the country, but always looking forward.

Cisneros says it all clicked when he moved to Robstown and was awarded a grant to teach migrant children how to make instruments. "One day I started thinking of the word avant-garde. Avant-garde to whom?" he said. "When you play something for the first time for somebody, that's new to them."

URBAN-15 provides educational programs, events, and performances dedicated to music, movement, and media. Famous for its Carnaval de San Anto street drum and dance troupe, which has performed for presidents and schoolchildren alike, the group also provides classes and varied artistic opportunities for all. For those into film, they have the MediaNow film workshop, the Josiah Media Festival for filmmakers under 21, and they're one of over 300 venues across the world that screen the yearly Manhattan Short Film Festival. They also offer vocal, percussion, and movement classes for everyone from deaf children to elders. If you're into set design and costume-making, they do that too. The group is also preparing 11 artist-in-residency rooms for those who want to completely immerse themselves in the South Presa center.

George and Catherine came to San Antonio in the '80s. Their vision was to provide community with boundless opportunities to perceive art. "If you have the ability to see a beautiful arch in a tree and recognize the design of life, that makes you a more creative person," said Cisneros. And that, U-15 believes, will make you a happier person — one more likely to enrich their community. That's the U-15 mission.

Nowadays, the center continues to innovate. Outfitted with theater-grade projectors and a state-of-the-art Tricaster broadcasting device, this hub of carnival drumming and new folk dance is spearheading San Antonio's digital media and technology scene. They stream classes live on their website, recently participated in a worldwide poetry reading called 100,000 Poets For Change, and are planning more streams for the spring.

"What we encourage is lifelong participation in art," says Cisneros. "Make it, ignore it, absorb it, make it again. But if you have the opportunity to participate at any age that's what's important."

Every Tuesday until December 18, URBAN-15 will be holding open-call sessions at 7 p.m. for anyone interested in dancing or drumming for Carnaval de San Anto. Registration is $5, and each class is $5. More information at urban15.org.