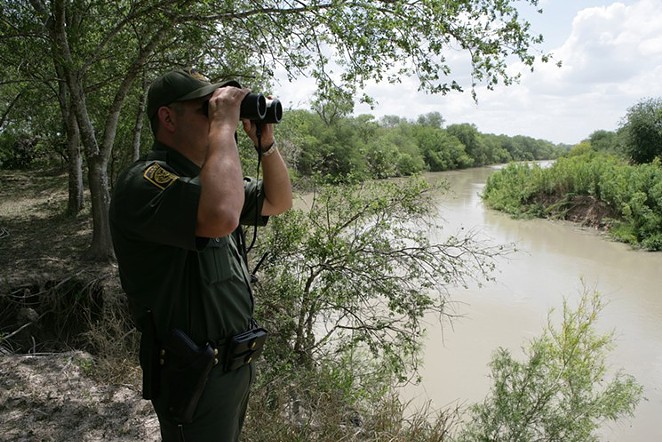 At first glance, it might look like the U.S. Supreme Court this week punted on an alarming case that raises a very disturbing question: whether federal agents patrolling the U.S.-Mexico border can shoot and kill with impunity, so long as their victims are Mexicans who die on Mexican soil.

In an unsigned opinion this week, the high court justices call what happened to Sergio Hernández on June 7, 2010 "a disturbing incident resulting in a heartbreaking loss of life." Yet, when it comes to whether the 15 year old's surviving family can sue the U.S. Border Patrol agent who shot and killed him from across the border, the justices largely kicked the question back down to a lower court to consider.

Hernández's family says he was playing with friends near the Paso del Norte bridge, which stretches into downtown El Paso, as they dared each other to run and touch the fence on the north end of a drainage culvert that divides the two countries. Border Patrol Agent Jesus Mesa claims he pointed his gun across the border and squeezed off two rounds because of rock-throwing smugglers who'd "surrounded" him. Hernandez died when one of those bullets struck him in the face.

Nearly two years after Mesa shot and killed the unarmed, unthreatening teenager, the U.S. Justice Department, which investigated the shooting, arrived at this confidence-inspiring explanation for why Mesa would face no charges or discipline: there wasn't sufficient evidence to prove the agent "acted willfully and with the deliberate and specific intent to do something the law forbids." He didn’t mean to do something unlawful.

Even a high court justice has questioned the integrity of the federal investigation that cleared Mesa. Grainy videos of the incident captured by witnesses on the Mexico side show Hernández hiding behind a pillar underneath a train trestle. When he peeks his head out, Mesa fires and the teenager crumples to the concrete. As U.S. Supreme Court Justice Sonia Sotomayor put it, "I can't square the police officer's account of this incident with that film."

When lawyers for the Hernández family went before the Supreme Court earlier this year, arguing for the justices to keep the lawsuit alive, a lawyer for the Border Patrol agent argued that the international boundary acts like a constitutional on-off switch – and that the switch was off in this case because Hernández died in Mexico. The federal Fifth Circuit appeals court dismissed the case in 2015, ruling in part that constitutional protections don't apply to Hernández because he had no “significant voluntary connection” to the United States and was shot and killed on Mexican soil (evidently the significant involuntary connection of a bullet to the face wasn’t enough).

In its decision this week, the Supreme Court basically refused to weigh in on that matter, instead telling the lower appeals court to reconsider the question in light of a 9/11-era detainee case the supremes decided last week. In that case, which involved the government's prolonged detention and abuse of people with no ties to terrorism, the Supreme Court threw out most of the plaintiffs' claims. While some have criticized that decision as making it harder for people to sue the government for unconstitutional treatment, Bob Hilliard, a Texas lawyer who represents the Hernández family, says that it still left the door open. In an email, he told us he expects the case will actually prove helpful in convincing the courts that constitutional protections apply in cross-border shooting deaths like Hernandez's.

In fact, Hilliard sees Monday's ruling as a significant win. Lawyers for the Border Patrol agent had also tried to dismiss the case by arguing that Mesa was entitled to something called "qualified immunity," a legal escape hatch that's routinely invoked in sketchy police shooting cases that make it to court. It essentially means that law enforcement officers are presumed to be immune for actions in the line of duty – that is, unless victims of police violence allege facts that, if true, violate a "clearly established right." When it dismissed the lawsuit against Mesa, the Fifth Circuit judges concluded that protection against a cross-border bullet to the face was not yet, as far as the courts were concerned, a "clearly established right."

Here's how the Fifth Circuit explained it: "The question here is whether the general prohibition of excessive force applies where the person injured by a U.S. official standing on U.S. soil is an alien who had no significant voluntary connection to, and was not in, the United States when the incident occurred. No case law in 2010, when this episode occurred, reasonably warned Agent Mesa that his conduct violated the Fifth Amendment."

Which, as the Supreme Court affirms in its ruling this week, is nuts, especially when you consider both the facts of Hernández's shooting and the way courts are supposed to judge qualified immunity. The question of a constitutional on-off switch at the border notwithstanding, Mesa didn't know whether Hernández was Mexican when he shot him in the face, nor did he know the teenager was some 60 feet from the official boundary line. As the justices wrote, the bar for judging deadly force is based on what the officer knew at the time, not what he found out later.

"It is undisputed ... that Hernández's nationality and the extent of his ties to the United States were unknown to Mesa at the time of the shooting," according to the Supreme Court ruling, which states that the Fifth Circuit "erred in granting qualified immunity based on those facts."

A dissent by Justice Stephen Breyer, which was joined by Justice Ruth Bader Ginsberg, goes even further, arguing that Hernández was clearly covered by the constitution. While Breyer cites a legal case that extended some constitutional protections to Guantanamo Bay detainees, he also points out that the U.S. government has always had some shared responsibility over the borderland drainage culvert where Mesa shot Hernández. Attached to Bryer's dissent is a photograph of President Lyndon B. Johnson touring the very site of the shooting with Lady Bird when it opened in 1968.

Stephen Sheppard, dean of the St. Mary's University School of Law, helped Hilliard (a St. Mary's alum) prepare for legal arguments before the Supreme Court earlier this year. Sheppard and others say the case is critical in part due to the surge of state and federal law enforcement officers politicians have sent to secure the border in recent years. Ahead of Supreme Court arguments in the case, former top officials within U.S. Customs and Border Protection even filed legal briefs arguing that inadequate training and shoddy oversight have led to an agency that operates with impunity, one that needs the courts to reel it in.

That could still happen thanks to Monday's high court ruling, Sheppard says. "For everybody who lives at or near the border, for anyone who regularly travels there, we need this case to move forward."