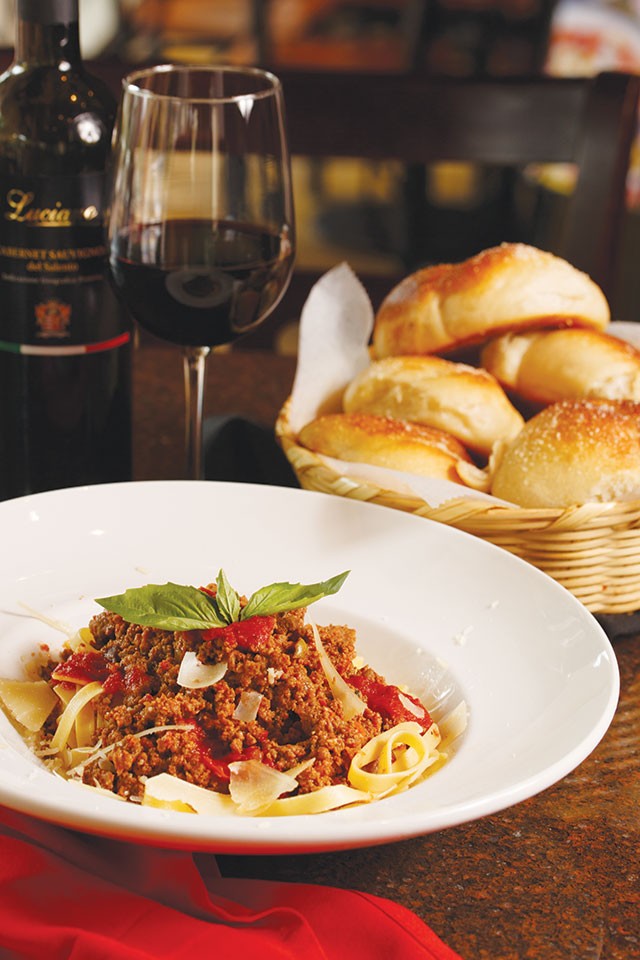 For better or worse, Luciano—er excuse me, Va Bene Pizzeria Napoletana since this summer—is a shopping mall eatery. Opened by the same folks behind the franchise that includes several iterations (there’s Ristorante Italianos, Neighborhood Pizzerias, a Family Pizzeria and five Luciano Express locations that double as mall food-court staples) of the same concept within San Antonio and Mexico, Va Bene is the first of its kind…so far. The concept, which cherry-picks winning combinations from its sister locations, needs to further distinguish itself from its kin if it’s to win La Cantera shoppers and area dwellers any time soon.

The eatery does switch the script enough when it comes to its interiors. A giant wall of bottled wines lines the left-hand side of the rather large eatery and black-and-white images of classic movie stars line the top of the windows with not one, but two versions of Sophia Loren and Jayne Mansfield giving the infamous side-eye. Italian classics and pop tracks play from the sound system at a moderate level and there’s plenty of light both streaming from the windows and from overhead bulbs to keep the restaurant from delving into steakhouse territory. The room’s focus, naturally, is the bar/oven combo that also doubles as an open kitchen. Unfortunately, it all comes off a bit too stark, too corporate and too easily duplicated. The setting toes the line between sterile and comfortable.

It’s a bit confusing, especially given the burrata bar’s signage that seems welcoming enough to draw orders via tall stools—of which there are none. For our first visit, my dining pal and I ordered the burrata mozzarella, described as creamy on the menu, served with mealy grape tomatoes, fresh arugula with a tart vinegary dressing, Italian olives and extra virgin olive oil. Surprisingly, the burrata also came with a hefty helping of roasted eggplant (it was OK) and marinated mushrooms (only slightly better than the eggplant), but no bread—although our server did ask if we needed any. While the burrata was fresh and sweet, the remainder of the plating was kind of a bummer—not the best start.

What did win us over was the solid offering of New York-style ’za. An excellent and foldable crust carried the helping of mozzarella with just the right amount of red sauce. No soupy messes, no cheesy gunk—just a great slice of pie. The 18-inch family-style pie, which Luciano eateries have carried since 1982, is also available in supreme, meat lover’s, Hawaiian, chicken alfredo and veggie, but you really can’t go wrong with the traditional cheese. If you’re a child of the ’80s and a fan of Teenage Mutant Ninja Turtles, the pie abides.

My dining partner’s spinach calzone with suspicious greens that could have either been frozen or canned was a wash even with its perfectly baked crust, melty cheese and fresh mushrooms. Why do bad calzones happen to good people?

I carried fond memories of the NY-style pizza with me for days (we had plenty left over after our visit), so I may have been blindly hopeful for my second visit. We stopped in for lunch when the eggplant parmesan appetizer called my name. We placed our order for it several minutes before our entrees, but my Bolognese was served up first. I hold no illusion that the fettucine was fresh-made, or that it wasn’t sitting in a vat ready to plate along with the sauce, but c’mon. Even still, while the sauce was comforting and evenly seasoned, the random chunks of not-so-hot pancetta were off-putting and too large to avoid.

When the eggplant parm finally did arrive, the serving was pan-fried without its signature breading and layered in a cast iron skillet with fresh mozzarella. Tasty, yes, but also hard to fish out of the scalding hot skillet and several degrees too hot to dive into as a faux starter.

My partner was perfectly happy with her Capricciosa Neapolitan pie, so I decided to give the “by the slice” option a go. Usually available at the counter in NY-style cheese ($3.50), NY-style pepperoni ($4) and stuffed meat lover’s ($7), our server made an exception and the slices are hard to beat. My meat lover’s was definitely big enough to share and just greasy enough to induce a wave of guilt, which quickly washed away.

The menu denotes specialty dishes with a red word bubble. “We’ve been told it’s “va bene” (very good in Italian!)” it reads…but most translations point toward “alright” or “OK.” I won’t argue with Italians on semantics, but Va Bene Pizzeria should stick to pizza and call it a day for everyone’s sake.