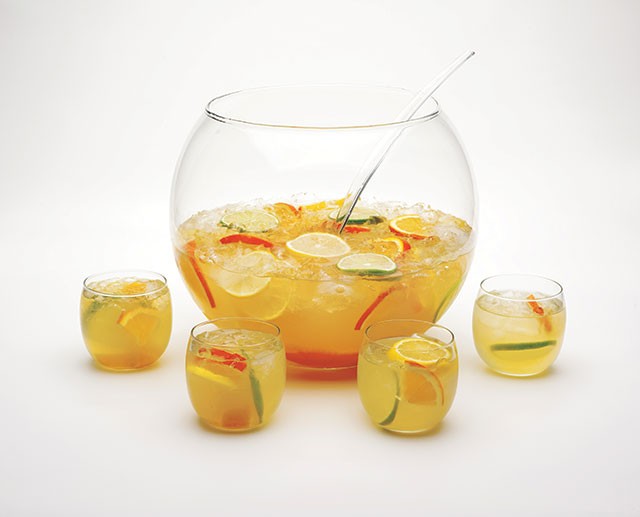 I didn’t know this: sangria, that often-sludgy glass of fruit salad irrigated with schlocky red wine and even-worse brandy, made its first, large-scale U.S. appearance at the 1964 World’s Fair in New York. I also didn’t know that another name for sangria (think “bloodletting,” for obvious reasons) in Spain, along with Portugal the countries of origin, is zurra. But René Fernandez of Azuca and Starfish does. The lively Latin bar that is sandwiched by the two restaurants offers five versions of the now classic drink.

Number one on Fernandez’s list is a Zurra, and it includes house red wine, Presidente brandy, chunked apple, citrus, stone fruits and sparkling water. Variations on a theme, he explained, include the obvious Very Berry; a Blonde with white wine and white fruits such as peach; and another called Mamushka (think nesting Russian dolls) that subs vodka for the brandy. But the one he insisted I try is the Del Patrón, a swanky rendition using a Spanish tempranillo, Cognac in lieu of brandy and Grand Marnier. The bartender shakes this one up to order with apple and citrus and serves it in a tall Collins glass. It’s anything but sludgy or schlocky.

Once you start looking, San Antonio has non-sucky sangrias to spare. At Spanish-themed Barraca, there’s a standard base mix including pear cider (cava and cider are classic Spanish variations on wine), Sprite and several fruits, to which cabernet or pinot grigio is added. The Cork Bar at Las Ramblas in the River Walk’s Hotel Contessa calls its happy hour “sangria alegre” and features a drink with orange, pineapple and cranberry juices plus orange, peach and apricot liqueurs and a “hint of cinnamon.” At Johnny Hernandez’s Frutería, the drink takes a turn south with blanco tequila, white rum and damiana, an (allegedly aphrodisiacal) herbal liqueur from Mexico’s Baja Peninsula. Chez Zinc, think a more upright version with a classy red, pomegranate juice, brandy and fresh fruit. Though nobody here does it that I know of, an even simpler version in Spain would be called a tinto de verano, consisting of red wine, ice and lemon soda. This you can easily do at home. Or you can riff on a basic recipe such as the one below (white, as it strikes me as easier to play with):

Pour wine, brandy and sweetener over fruits, let marinate briefly, and serve with a bucket of ice on the side.

It’s easy to imagine riffing on the fruit (say pairing lychees with Riesling or using watermelon with Beaujolais), infusing a simple syrup with ginger or heading east with Asian pear, sake and sauvignon blanc. It’s summer, and anything goes.