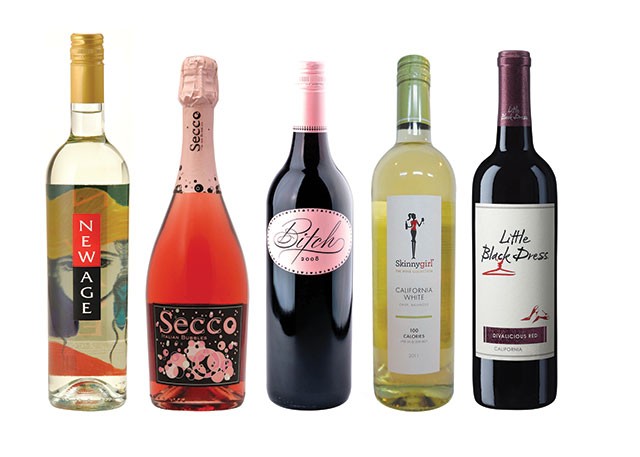 Any kind of marketing at all is suspicious to some of us. Men’s insecurities are targeted by Cialis, their vanity by the-more-blades-the-better Gillette, but the blatant efforts being made in the wine world to pitch product directly to women seem especially insidious. Perhaps it’s a legitimate way to reshape a market in which, despite the fact that women buy most of the wine consumed, the product is nevertheless one largely controlled by men. But given the category’s emphasis on glittery, over-the-top labels and the implication that the contents are fun, often sweet, and in no way complex, forgive me if I don’t think so. Women are also said to have better palates.

A stroll down the wine aisles at World Market or most H-E-Bs is an eye-opener. Bottles of Italian Petalo Moscato, a blowsy rose on the label, cohabit happily with Sweet Bliss sweet red wine sporting a stemmed cherry erotically dripping chocolate. Even Central Market isn’t immune. Here, Sofia Coppola’s Sofia, a pink sparkler packaged in a four-pack of juice cans, complete with a built-in straw, flies off the shelves. (“They’re popular for indulging yourself while getting a mani-pedi,” admitted wine manager Heidi Holcomb. Sadly, I didn’t have one scheduled.) The 100-calorie Skinny Girl stood out at Gabriel’s Superstore.

The Skinny Girl product line was dreamed up by former Real Housewives personality Bethenny Frankel. Though Frankel sold the company, which also markets pre-mixed cocktails, in 2011, the Huffington Post recently called it “massively successful…one of the fastest-growing on the market.” A panel of both sexes gathered at the Current tasted the Skinny Girl White with these results: “This smells like a cheap wine,” “Not even re-run material,” “100 calories doesn’t sound that low…if there were a big difference, maybe.” (100 calories isn’t that low; an exemplary German Riesling would weigh in at just a few calories more per five-ounce glass.)

The 2011 Little Black Dress Divalicious White, a California blend of four white grapes plus 6 percent “other white,” fared only a little better: “I wouldn’t buy this but don’t actually dislike it,” “It’s a cookie wine,” “Maybe if I were going to watch You’ve Got Mail on mindless repeat…” Some detected a little green apple, but most agreed that “90 percent [of the target audience] would have no interest in what’s in the bottle; it’s all about branding.”

Another white, the non-vintage New Age, a blend of torrontés and sauvignon blanc from Argentina, might almost be picked up by an oblivious guy—or at least he wouldn’t be too embarrassed at the checkout stand. The image of a long-necked beauty is printed on the back of the back label and must be viewed through the bottle. Such subtleties did not extend to the wine itself. “Its carbonated edge [not mentioned on the label] seems accidental,” “Would be better as a cocktail or spritzer”—a suggestion that is made on the label.

The only purposefully spritzy wine in the lineup was a sparkling Italian rosé, prettily packaged in pink with bunches of bubbles. Iconoclastic Washington state winemaker Charles Smith makes Secco with “two Italian sisters”—but it didn’t rock the boat: “Avril Lavigne would drink it,” “It has a Sweet 16 look,” “It seems flat”…Yet there were mild dissenters of the “It’s the least bad wine so far” sort.

LBD’s 2010 Divalicious Red is the wine equivalent of sausage making: there are nine listed red grapes plus “other.” “It smells like a Glade candle,” said one taster. “There’s very soft blackberry fruit,” said another, hopefully. “Nobody would buy this unless it were $4,” was another opinion. (It’s actually around $12.)

Which brings us to the pink-labeled 2010 Bitch Aragon Grenache, one whose target audience was less clear. In the words of more than one wine industry pro, it might be equally aimed at men and termed a “panty-popper.” (Note that others make variations on this theme: Royal Bitch, Sweet Bitch, Happy Bitch, Sassy Bitch…and these are more clearly woman-oriented.) Regardless, “Is this really a joke? That’s the secret power of this wine,” and “I’m upset that I like this the best,” were typical comments.

In the end, there was pretty much universal scorn for the marketing premise as typified by Little Black Dress: “Flavorful and feminine, [these] blends are the perfect way for every woman to embrace her inner diva.” Why not, we thought, celebrate instead women in wine by concentrating on influential female winemakers—of which there are many. Seems like a superior sisterhood.