Veg Out with Earth Burger 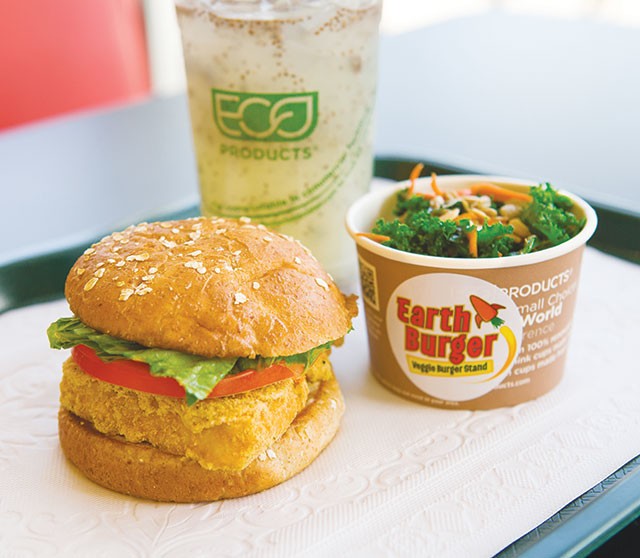 “Do you want cheese on that?”

This is more or less how my first interaction at Earth Burger went down. I didn’t rule out the possibility of somehow being transported to Cali’s health-nut shores. Nevertheless, there I was ordering a No. 1 combo with cheese (organic), edamame and a drink. Maybe I had been kidnapped?

But instead of it being a veggie-fueled dream, the eatery is a very concrete reality. Let’s run through a quick timeline of Earth Burger, shall we?

In late February, the team behind Green Vegetarian Cuisine, which consists of brothers Mike and Chris Behrend, Paul Evans and Luann Singleton (the Behrends’ mom), announced their intentions to open Earth Burger, in order to provide healthy alternatives for the drive-thru set (think frazzled parents who don’t want their kiddo to eat from fast-food giants, but usually have no other choice than to pull in and yell their orders into static-filled intercoms).

In early April, Kickstarter officially approved Earth Burger’s campaign and the eatery was able to surpass its original $40,000 goal days before the 30-day deadline. I’m guessing the pop-up Earth Burger menu nights at both Green locations and exclusive donor events helped push it along.

It should come as no surprise then, that when Earth Burger finally opened its doors in mid-June, area vegetarians and other health-conscious diners were eager to get their hands on the promised fast food.

The restaurant is housed in what would have been a Starbucks, which wouldn’t have had the biggest kitchen around. Instead, Earth Burger’s prep area and grill line eats up a sizable chunk of the small edifice. Still, the space is used well. There’s a large round table for groups, a few vinyl booths to cram into, a bar and a smattering of outdoor tables for al fresco dining. Giant windows and tall ceilings make for an airy spot, and there’s plenty of room up front to order.

When it comes to decisions, the menu is short and to the point—burgers and wraps, kids’ meals, sides, drinks and desserts. That’s it. All but two menu items are vegan. By and large, Earth Burger and co. deliver on the promise of vegetarian fast food, with just a few minor kinks.

For instance, my Earth Burger patty, billed as having 68 percent fewer calories than its meaty counterpart, was good, but far from earth shattering. The addition of fresh lettuce, special sauce, thick tomato slices, pickles and onions helped jazz up the bun. The availability of hot edamame with a sprinkling of kosher salt did set the meal apart, though it should be noted that the original combo includes crinkle-cut fries (plenty crisp and delicious) and a drink. The edamame is listed as one of the $3 sides, so substituting it in place of the fries means there will be a small upcharge on the combo price.

The spicy chik-n-sandwich mirrors its corporate counterpart at Mickey D’s and could use a bit more heat, but it meets fast-food expectations, while menu highlights come via two unlikely sources—the grilled chik-n protein wrap and the “fish” sandwich. No, really.

Although served on a whole-wheat tortilla, most items can be wrapped in lettuce instead (for the carb-averse). Because the wrap is filled with kale salad flecked sunflower seeds and carrots, olives, hummus and grilled chick-n—all items that added moisture to the mix—my lettuce wrap turned a bit soggy, but otherwise, the flavors all melded well with each other. Sweet kale salad gave way to briny olives and earthy hummus; the wrap felt healthy enough that I could have indulged in the fries. I stuck with the hummus and carrots side, but maybe next time.

The other clear winner here is the “fish” sandwich. Instead of being a gross frozen square that’s usually stashed away until Lent (I’m looking at you, Filet-O-Fish), the faux fish offering here starts with a soy and wheat-based Gardein fishless filet that’s then breaded and seasoned using nutritional yeast and seaweed. Homemade tartar sauce helps give the sandwich that extra oomph. It’s fishy … in a good way.

I took a look around Earth Burger after dining on my fish sandwich on a recent Sunday evening. A gaggle of cars streamed through the teensy drive-thru, and veggie-lovers young and old happily munched on their orders. Earth Burger’s first location (because I’m positive this concept will spread) is offering a solid, if safe, lineup of vegetarian fast-food eats at prices comparable to the big burger chains, and its audience will keep orbiting (the drive-thru) for more.