Vegans in San Antonio Have More Options Than Ever Before

Brick’s 3,400-square-foot event space was buzzing on a recent Wednesday night with more than a dozen vendors selling everything from jerky to gumbo to kolaches to fabulously piped cakes. Most were tasty, and all were made without animal products. Even the gumbo.

It was the sixth event for Vegan Stop Shop, a monthly gathering of likeminded people that kicked off last November 1 on International Vegan Day. The dozen or so vendors enlisted for that inaugural event — which also included accessories and apparel — sold out within the hour.

“It was nuts. We didn’t expect it at all,” said Melody Castillo of Raza Eats, one of the co-organizers for the event along with Lauren O’Connor and Kia Geronimo of Cake Thieves Bakery.

The trio has been vegan — that is, they’ve abstained from eating animal products, including milk and honey — for some time now for various reasons, be it ethical, environmental or dietary. And they’re not alone.

It shouldn’t really be surprising given that several 2018 lists featured on Food Network and Buzzfeed have billed vegan products as trends to watch. As it stands, a handful of studies point to at least 3 percent of the U.S. population identifying as vegetarian or vegan, and 33 percent eating vegetarian or vegan meals.

The Vegan Stop Shop is one of two markets that have drawn several hundred veggie-curious folks, and the businesses they support are growing before their eyes.

The tagline for the bakery was simple: “We make vegan things that don’t taste vegan... ’Cause that would be gross.” And sure enough, since launching in San Antonio, the donuts have grown a fan base across the city and are available at Mila Coffee, White Elephant Coffee Company, Larder at Hotel Emma (on weekends) and the newly opened Berry to Bean. It’s not just that they’re vegan – the donuts are tasty, varied and just as eye-catching as their traditional counterparts.

With Raza Eats, Castillo is taking her love of cooking and her unique sazon to turn meat-eaters into converts. Castillo makes vegan picadillo using texturized vegetable protein, potatoes, cumin and other seasonings, and shredded chicken tacos by modifying Southwest-style “chicken” strips made with pea protein and soy.

“It’s about seasoning and texture and playing with your food over the years until you get it right,” Castillo said.
Castillo, O’Connor and Geronimo organized the latest event in two days and still had a healthy turnout that included several hundred vegetarians and vegans.

Vegans like Kaz Sephton, the former president of the San Antonio Vegan Society, are grateful for the growing number of options. When Green Vegetarian Cuisine originally opened on North Flores, she was in line at 6 a.m.

“I was at the first one and was so stimulated,” Sephton said. “I had sangria, and a pineapple burger and a smoothie, and gelato. It was wonderful and harmless.”

Vendors also included Go Vegan San Antonio, owned by Tara and Akeem Best, who specialize in vegan meal delivery. The couple and their five children converted to a vegan lifestyle after watching the 2017 documentary What the Health They launched Go Vegan in San Antonio last November to help make vegan options more affordable, convenient and accessible to residents. They are currently crowdfunding to purchase a food truck with which they hope to serve a multitude of cuisines to show how easy a dairy-free, meat-free lifestyle can be.

“We started by making things that we were familiar with – tacos, spaghetti, black beans and rice,” said Tara.

Their vegan journey began in 2016, and after a few slips, they re-committed to a dairy-free, meat-free lifestyle in 2017. The couple launched Hip Peaz Vegan Eats in January. Their best sellers are their “crasian shrimp po’boy,” an Asian-fusion Panko-crusted shrimp served with a kimchi slaw on a hoagie, a sushi burrito with black and white rice, Panko-fried shrimp, crasian sauce and veggies, and finally their “ksogood,” a creamy vegan cheese dip that would fool even the wisest queso connoisseurs.

The shrimp is vegan, made with soy powders, kelp, wheat fibers and potato starch, resulting in chewiness and a familiar seafood taste. Lea drives to Houston before pop-ups to stock up. San Antonians will have a chance to eat Hip Peaz regularly starting June 11 when they join the Munch On and Beyond co-op of vegan vendors at 13649 Wetmore Road with house-made meats (i.e. brisket and ham) and daily specials.

Tapatio Vegan Tacos, owned by Araceli Pelayo and husband Eduardo, rolled onto San Anto roads with their mix of vegan tortas, sopes and jackfruit tacos as a direct result of the Vegan Stop Shop and are already a fixture at events and pop-ups.

While in the minority, vegan and vegetarian eaters are making an impact in San Antonio menus. For Rebel Mariposa, owner of La Botanica on South St. Mary’s Street, awareness of plant-based diets has spread in the last several years.

“I want to say (before) less than half of the people coming even understood what vegan was,” Mariposa said.

She cites media exposure, Facebook posts and menu options as reasons for the shift, but she also points to an openness and curiosity from omnivores when it comes to plant-based diets. 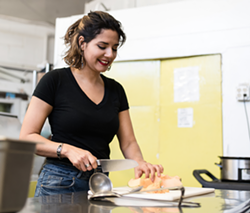 “When I first told people, a wall of defense would go up, and they would spew out why they ate meat and why it’s OK,” Mariposa said. But the movement, she said, has shifted to include more people of color, less pretentiousness and less righteousness. Her chalkboard menu displays the v-word only once. She wanted people to visit La Botanica, try the food and tastes for themselves. The bar/restaurant, which will celebrate three years this June, has expanded its menu and now features weekday specials such as hot dog Wednesdays and even Fiesta specials such as vegan chicken on a stick.

“You’re definitely going to see more of that at La B,” Mariposa, a seven-year vegan, said.

La Botanica is also the home of the monthly Happy Hour Vegan Market, hosted in part by Yvette Hernandez, a vegan Crossfit enthusiast who shuts down any criticism or ribbing by noting the strongest guy at her box also happens to be vegan.

She says following a vegan diet isn’t as hard as it used to be.

“I don’t like salad, but there’s so many vegans spots like Viva Vegeria, Green, Moshe’s Golden Falafel, Thai Vegan… Even Taco Cabana has something when it’s the middle of the night you can order,” Hernandez said, noting black beans qualify as vegan.

And the list of places keeps growing. Though Thai and Vietnamese restaurants had been some of the only safe spaces for vegans to modify a meal, new restaurants are offering completely meat-free versions of everyone’s favorite dishes. There’s bánh mì with “beef, chicken, or Chinese BBQ pork” at Boba Tea Garden, which is tucked away in the Culebra Crossing Shopping Center. Thai Vegan, which opened in late 2017, is usually packed with eaters hoping to score a meat-free bite. Opened by chef Phairat “Pat” Phonoim, Thai Vegan is nestled in a nondescript shopping center at the corner of Huebner Road and Churchill Estate Boulevard. You won’t find fish sauce there, but you will find satisfying pad Thai, and sweet chili “chicken” wings made with texturized protein and a sugar cane “bone.”

“I didn’t think I could open a vegan restaurant three years ago without offering some sort of meat option,” chef-owner Elizabeth Johnson said.

At Revolucion Coffee + Juice, chef Mike Hernandez, who switched over to a vegan lifestyle and diet while trying to overcome psoriasis, uses the skills he learned at the Art Institute of San Antonio, Lüke San Antonio and Mixtli to create a variety of meals, 60 percent of which are vegan or offer a plant-free alternative. His vegan pad Thai and chickpea bowls continuously outsell their meaty counterparts, and that reception gives Hernandez room to play — raw Oreos made an appearance on the menu a few weeks ago, and are a blend of pepita seed and coconut with cashew cream. There’s no crunch, but the flavor profile is strikingly similar.

Over at the Good Kind inside the Pearl’s Bottling Department food hall, vegans can order customizable Market Bowls that are meat-free, with available add-ons. Hopdoddy Burger Bar added the Impossible Burger in 2017, with a high-tech plant-based patty. Staple pizza joints such as Pizza Classics are offering vegan options for an additional cost, while fast-casual spots like Urban Bricks pizza offers dairy-free cheese (which helps when you’re hosting the next meeting of the San Antonio Vegan Society near Northeast Lakeview).

For Sephton, the 17-year vegan with a busy lifestyle, it’s never been easier to stick to her principles while on the run. 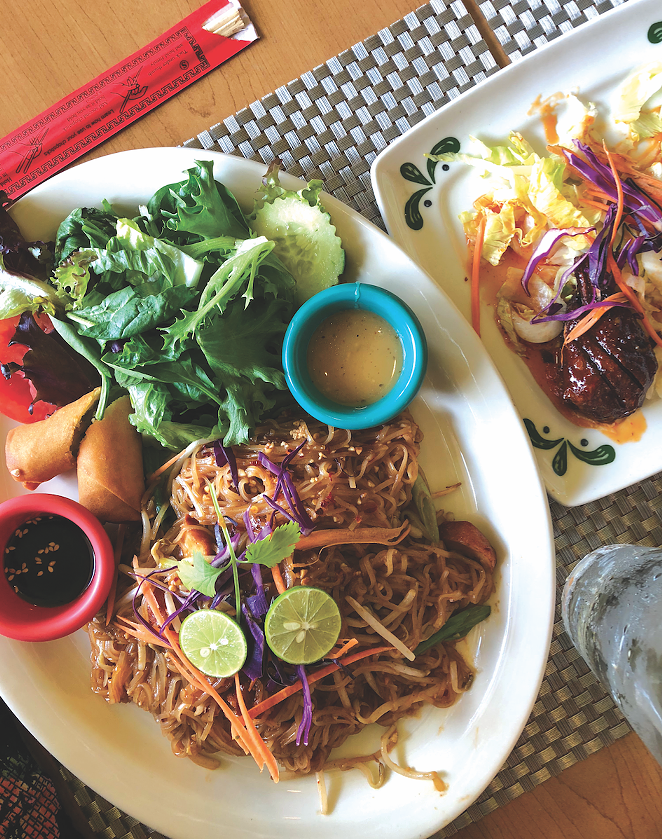 “There’s Thai Dee on Blanco, which has a Vegans Delight. Lick has four vegan ice creams, when I don’t want to eat the Magic Bar at Green. I can’t not mention the Cove with their vegan bacon cheeseburger,” Sephton said.

“When people have choices, it’s so much easier to have a compassionate meal.”