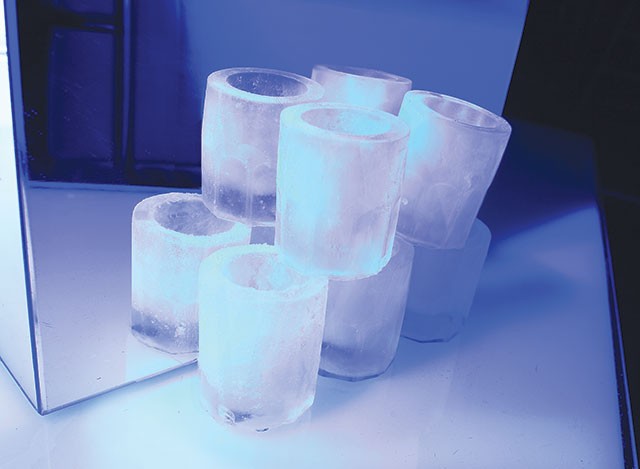 Ice Lounge, which proclaims itself as a “true Vegas-style club on the Northwest side of town,” definitely exudes a Vegas vibe, but while some parts are very Venetian, some are undoubtedly Circus Circus.

Located in what used to be Clicks Billiards (they unfortunately retained some of that trademark grungy Clicks carpet), Ice Lounge is in a convenient spot just off the freeway. Its unassuming façade is no doubt an attempt to give off a clean, sophisticated look. Nestled between a brightly lit Subway and an active beauty salon, Ice’s blacked-out windows and simple sign instead signal a business that has gone under.

Once inside, Ice appears anything but floundering. Even on a Wednesday night, Ice Lounge is bustling. With musical acts, athlete appearances (SA Talons, football fans) and live radio broadcasts, Ice Lounge does a good job of keeping the atmosphere lively. Keep in mind that these attractions sometimes come with increased covers, usually around $15.

As soon as you enter you can’t help but notice the signature VIP section on the left. This area is prominently featured on the bar’s website and rightfully so. Here you’ll find a healthy selection of bottle services on offer from $100 bottles of Bacardi Superior to $500 bottles of bubbly Dom Pérignon. The Ice Lounge allows table reservations from its website, a convenient feature because seriously, who makes phone calls nowadays?

To the right of the entrance is a full bar that does nothing to betray the flashy feel the lounge is going for. The liquor lineup is worth braving the crowded bars. Ice Lounge has a surprisingly varied selection of spirits, including some you don’t often come across in San Antonio bars, such as Deep Eddy Ruby Red grapefruit-infused vodka and Three Olives Marilyn Monroe vodka (a strawberries and cream version, we’re sure Marilyn’s just thrilled). The usuals, such as Jack Daniels, Patron and Johnny Walker, can be had as well.

Let’s not beat around the bush here. If you are going to get liquor at Ice Lounge, you need to at least try the signature ice shots, served in hollowed-out blocks of ice. Overpriced? Nah! Neat and worth doing at least once? Most definitely.

There is only one way to describe the shot itself: cold, wet and messy. No special handling is needed, as this isn’t dry ice. While it could have been colder (maybe if they chilled the shot with the ice in a freezer?), it was still appreciably different than a traditional shot. But don’t forget, this novelty is still made of ice, so as much as you might want to carry the container around with you, as the bartender so succinctly advised, “It’s gonna be a puddle soon, dude.”

If you just want some beer, things get a little more straightforward. There is a stand-alone beer tub just off the main bar, and a smaller bar near the DJ on the other side of the room for the strictly bottled and unexpectedly intriguing selections. These are nice back-up spots for the times (read: basically all the time) the main bar is smashed.

The rest of the decor is very traditional, maybe skewing on the tawdry side—like the table with a pole for the token drunk girl to dance on—but no one ever claimed Vegas is pure class.

Where Ice Lounge loses some points is in the vibe and clientele. Maybe “rough” wouldn’t be the word, but let’s just say the no fewer than four signs taped to the outside of the bar strictly forbidding sandals, chains on wallets, gang paraphernalia and gang-related facial tattoos were probably needed. Ice Lounge tries to keep it chill (sorry), but on more than one occasion mini scuffles broke out at the bar. This might explain the attitude of some of the bartenders and servers, as they seemed to be a little harsh and “over it” at times, contributing to an icy (ha!) vibe.

Ice Lounge is a cool (sorry, not sorry) idea with decent execution. The bar seems heavily dependent on the day of the week one visits. But patrons might luck out, and if willing to roll the dice, it could be a good place to end the night.