Vera Brittain's Memoirs Through A Musty Lens In 'Testament Of Youth' 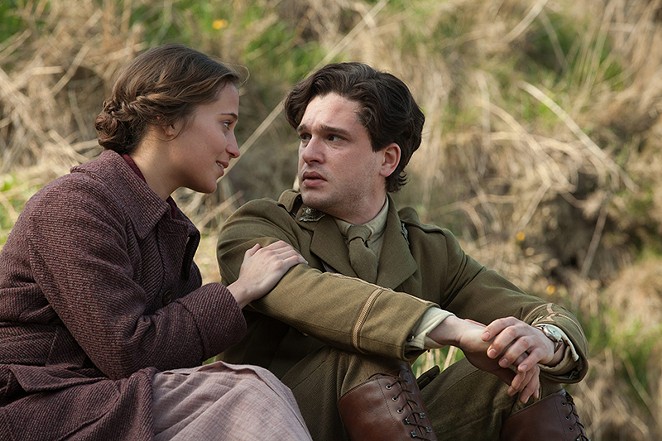 What makes you hate a movie?

In the 1990 début issue of Entertainment Weekly, the magazine's editor thoroughly outlined an A-to-F grading scale, explaining that an F is reserved for "something utterly without redemption" and that the minus in a D- was meant to "penalize entertainment for excessive violence or sexism."

In other words, you don't hate a film just because it's bad; forgettable bad films happen all the time. You hate a film because it disturbs something deep inside, because it violates personal values or because it fails to entertain on any level.

A film needs to do more than merely suck to make me hate it. Jupiter Ascending may not work as storytelling, but I can't totally dismiss something that awe-inspiring and weird. And while the solipsism of Me and Earl and the Dying Girl rubbed me the wrong way, even at its worst the film is too exuberantly creative to fully loathe. Entourage, on the other hand, becomes hateful not just because of the rampant misogyny (note to bros: female celebrities do not think it's adorable when you stalk them), but because it's lazy and safe and contemptuous of the act of moviemaking. It doesn't even try.

On the surface, Testament of Youth wouldn't seem to qualify as a candidate for hate-hood. The film seemingly has a lot to like — it's based on Vera Brittain's WWI-era memoirs and stars Ex Machina cyborg Alicia Vikander. But it made me recall a scene in Hands on a Hard Body, a great and wildly little-known 1997 documentary about an endurance contest, where one of the contestants claims he doesn't mind pain, but that he's terrified of numbness, because numbness means death. Sufficed to say that Testament of Youth left me as numb as any film I've seen this decade.

It's an embalmed and humorless slog, an interior design spread masquerading as biography, nothing but a decorative pose of noble suffering. I'm tempted to compare the act of watching Testament of Youth to trudging through a wax museum of war movie clichés, but that makes it seem as though the film might be mildly entertaining. It's more akin to becoming a wax figure for 129 of the most interminable minutes of your movie-going life. My experience watching Testament of Youth was exactly how it must have felt like for Han Solo inside of the carbon freeze — a cold, numb, endless waking death.

Vikander's Vera Brittain is a headstrong aspiring writer whose world becomes upended when WWI starts calling away the men in her life, including a poet named Roland (Kit Harington) who eventually becomes her fiancée. When those sweet, early promises of a swift war prove incredibly stupid, Vera drops her studies to become a nurse on the front lines, at one point tending to a group of German prisoners.

BBC veteran James Kent makes his feature début here, spending a lot of his time mooning over flower arrangements and teacups and curtain patterns instead of his talented young actors. Naturally, the hell of war in Testament of Youth boils down to smudgy faces and the obligatory Gone with the Wind-style crane shot over rows of wounded soldiers. While indulging in a lot of gauzy and mummified fussiness, Kent strands his actors with one of the mustiest and daintiest scripts in recent memory.

One of my unofficial criteria for a lousy movie is that the protagonist should offer a "here's-what-I've-learned" speech at the end, a Brady Bunch-style moral wrap-up that lets the audience know exactly how they should think and feel, just in case they weren't paying attention (great movies don't need to tell you what to feel — they just make you feel it). Vera's big here's-what-I-learned speech: "No war." No more.

Testament of Youth held an 82 percent approval on Rotten Tomatoes and a 77 rating on MetaCritic last week. It's utterly baffling to me that anyone could find an ounce of entertainment in this cinematic lace doily, but even critics who don't like the film seem to be pulling their punches. Perhaps they believe that it has its heart in the right place, but they're wrong — Testament of Youth has its heart firmly up its ass.