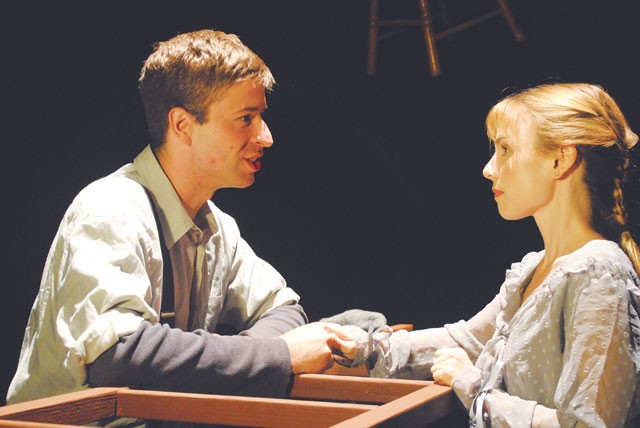 With its production of Thornton Wilder’s iconic Our Town, the Vexler lifts a good idea from a Chicago-area theater — but it should have lifted one more. Just as the Lookingglass Theater recently suspended the flotsam and jetsam of fictional Grover’s Corners above Wilder’s bare stage, so too does the Vexler hoist the “set” of this production above the Vex’s black box space: a lunarscape of zero-g chairs locked in space. It’s a striking image, and a striking metaphor — if even chairs are wafting off the planet, what hope is there for things of the flesh? We are all of us destined for that suspended animation known most commonly, and simply, as death.

Unfortunately, the Vex should have pilfered from the Windy City’s other version of Our Town, a blockbuster that premiered in 2008 before transferring off Broadway, where it broke records and hearts. As re-conceived by David Cromer, that Our Town stripped away decades of gooey sentimentality and presented the play as the unflinchingly avant-garde work it truly was and is. The Vex’s production, alas, pulls its punches, and presents an Our Town familiar from generations of high school, and even middle school, productions: This is your — rather, our — ninth-grade town.

A nostalgic production it is, with a homey atmosphere that imbues craggy New Hampshire with some oddly Southern charm. Jeri Magee’s gray period costumes are bathed in Ken Frazier’s gloaming light until everything glows in warm sepia tones. This is pleasant enough for a photograph, but not ideal for demarcating the play’s celebrated set-pieces (like Professor Willard’s disquisition on the ages of Earth). As the first two acts explore the rituals of small town life — rituals both profound and mundane — we see local youngsters Emily and George negotiate the contours of their budding relationship, including a famous and lovely courtship atop two ladders, lit solely by the moonlight’s rays. The second act brings marriage, and the third act, hell.

The Vex’s dewy-eyed approach sort of works for the first two acts before belly-flopping in the third. The closer Our Town approaches its heart of darkness, the less comfortable co-directors Tami Kai and Dylan Brainard seem with the grim, cosmic consequences of Wilder’s vision. The play’s head-spinning conceit — that every community on the planet is, was, and ever shall be a necropolis — is bizarrely muted; the talking dead sit scattered and largely forgotten on the periphery of the theater. (They’re exiled to the suburbs, so to speak.) We end up looking at a mostly bare stage instead of what Wilder intended: a group of dead citizens in chairs confronting a group of dead citizens, in chairs. (You’re in the first group, by the way. Or soon will be.)

And so it all comes undone. Emily’s concluding stroll down memory lane — more like a spin ’round dead man’s curve — is awkwardly staged, and lacks the impact required for a truly memorable ending; it also gives Jim Mammarella’s avuncular Stage Manager little to soliloquize about. In fact, much of the poetry of Our Town is lost in this production. The famous definition of Grover’s Corners as a zip code in the mind of God is here a throw-away line, for no apparent reason. On opening night, the actors were visibly nervous, with some stammered phrases: I’ve the feeling that the staging was still gelling.

In general, the large ensemble’s acting is appropriate for a community theater, though a smidgen below the Vex’s average in terms of polish. As no-nonsense matriarchs, both Barbara Lewis-Harris and Lynn McIntyre Dulmaine bring a welcome flintiness to their roles, while Rick Lukens nails the melancholia of alcoholic choir master Simon Stimson, who’s proof positive that Grover’s Corners is anything but Mayberry. Rusty Thurman lends an oversized, goofball charm to George, which doesn’t quite click with Heather Manly’s more mannered performance as Emily. Chad Miller’s careful soundscape helps to fill Our Town’s metaphorical (and literal) dead spaces.

The theater scene in San Antonio is a-changing, and institutions are (at last) developing distinctive company styles. More than once I considered how other San Antonio ensembles might have tackled the challenges of this particular play. How the Classic might have aimed for a more Beckettian gravity, or how the AtticRep might have populated Grover’s Corners with barking seals and sex toys. I fear Our Town, as a script, plays less to the Vexler’s traditional strengths than to its traditional weakness: a warm-heartedness that tends to bury interpretative problems — along with, in this case, Our Town’s dead. •