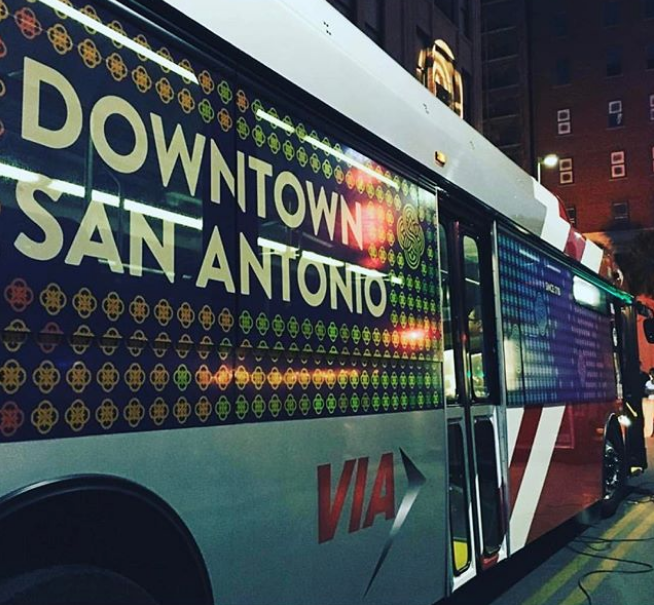 In light of VIA’s 2016 adoption of its Vision 2040 Plan, a long term project aimed at improving public transportation in the area, the company is calling for community feedback to help shape their proposed public transit lanes across town.

The survey, open through July 18, is thirteen questions in total with a text box so residents can provide direct feedback to VIA. If you are more comfortable in Spanish, the website provides that option.

The draft network of the rapid transit corridors, displaying seven different routes stretching all over San Antonio, is informed by data collected from the public in 2017. This new infrastructure seeks to provide more efficient and reliable transportation to meet the needs of the city’s growing population.

According to census data, San Antonio grew more than any other city in the country in 2017—surpassing the 1.5 million mark. Many are concerned about the population outgrowing the highway system. If you've been on I-35 at rush hour, you might argue it already has.

“Our long range plan as well as that of our transportation partners are all trying to service future demand of a million plus people in our area by 2040, and recognizing that our current infrastructure would not be able to sustain that,” said Jeffrey Arndt, via President and CEO. “We are all looking at ways we can contribute to future mobility.”

Arndt admits this is no easy feat. Access to sufficient funding is the greatest thorn in the side of this project. In its roughest original draft, the projected capital cost was in the neighborhood of 7 billion dollars, which accounts for a marriage of light rail and rapid transit corridor busing. After their creation, these lanes will have the capability of adapting to the needs of the community.

It also doesn’t help that despite its surging size, San Antonio is at a disadvantage because funding for a project of this scale is not currently supported under VIA’s infrastructure.

“Unlike Austin, Houston and Dallas that have pledged a full penny from their sales tax to their transit system, we have pledged a half cent to ours,” says Arndt. “To give you an idea, Dallas has invested something like 5 billion dollars more than us over the past 20 years.”

With this relative impediment, VIA anticipates the formation of many capital partnerships. This of course includes the city of San Antonio, Bexar County, Tex Dot, Alamo Area Metropolitan Planning Organization (AAMPO) and the federal transit administration — the last of which has a program that will potentially fund up to 50 percent of the capital cost of the project. If they receive federal help, the first project is estimated to begin in the mid 2020s.

After spending 25 years working for the Houston Metro and seeing a similar system applied successfully, Arndt is optimistic that even the most diesel truck loving amongst us might be swayed. “If you can offer relatively fast travel time, reliable travel time and have highly frequent service...it makes the service attractive as a viable option.”

The outcome of which lines will be tackled first and how they will manifest is largely still up for deliberation by the VIA board and informed by the feedback provided in surveys and community meetings. VIA wants to build a system that the public wants and needs, stresses VIA Communications Manager Lorraine Pulido and CEO Jeff Arndt.

Be sure to fill out the survey, your opinions and insight will directly impact how this exciting project is carried out.