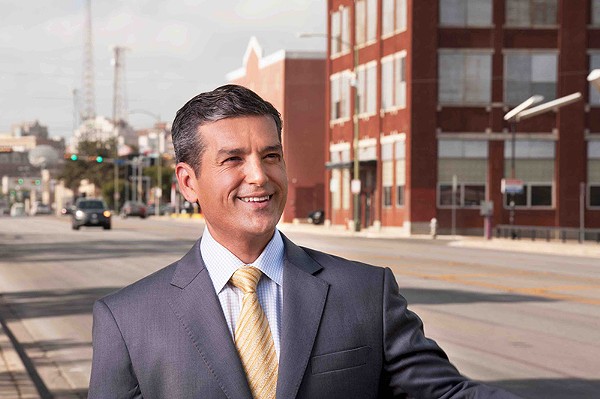 Holly Ronkko put all of her eggs in Mike Villarreal's basket.

The San Antonio native and stay-at-home mother of two fully expected the former state representative to be the next mayor of the Alamo City.

So when Villarreal didn't receive enough votes on May 9 to earn a spot in the runoff election — on Saturday, between Ivy Taylor and Leticia Van de Putte — Ronkko was shocked.

"My husband and I looked at each other and said 'Now what do we do?'" Ronkko told the San Antonio Current.

Ronkko was surprised, upset and disappointed by the outcome of the election. And she wasn't alone. Now she has to make a choice for mayor that neither she nor many other Villarreal backers relish.

As one of 22,247 voters who picked Villarreal in the general election, Ronkko must now choose between Taylor and Van de Putte — two candidates who at first said they wouldn't even run for mayor.

"We're really torn about who to vote for now. Neither of us have a very good feeling about either of the candidates. We have issues with both of them," said, Ronkko, referencing her husband.

Villarreal, 43, ran a promising campaign. He was the first candidate to enter the race, taking the plunge in November 2014. He even resigned from the state House of Representatives, where he was widely regarded as one of the state's most effective lawmakers, to focus solely on his mayoral campaign.

Along the way, he earned endorsements from SA political heavyweights such Rep. Joaquin Castro and his mother, longtime activist Rosie Castro and State Sen. Carlos Uresti. He also garnered support from the business community, including leaders of Rackspace and Broadway Bank.

Ronkko said she was drawn to Villarreal by his position on improving public infrastructure such as bike trails and how he described a vision for the entire city — not just the oft-discussed urban core.

"It seemed like in between downtown and the outskirts of 1604, all of us in the middle, we kind of get neglected," Ronkko said. "The way that he spoke, it was making sure that every part of the city had some improvements going on."

Erin Strauss, a retired teacher who is now Villarreal's neighbor in the King William District, also said that Villarreal's outreach to "every corner all over San Antonio" helped win her vote.

"I did love what he had in mind for ... making every neighborhood worthy of attention," Strauss said.

But it just wasn't enough on Election Day. Though Villarreal picked up about 26 percent of the vote, Taylor squeaked past him with 28 percent. Van de Putte led all candidates with just over 30 percent.

That means that there's a huge bloc of potentially undecided (if a little disgruntled) voters from Villarreal's camp who could now swing the election for Taylor or Van de Putte.

But they won't get any guidance from their top candidate.

Villarreal announced last month that he wouldn't endorse either remaining candidate, sticking to a pledge he made when he entered the race.

"Our campaign was a unique mix that spanned political parties and brought together fiscal conservatives and social liberals," Villarreal said in a statement to the Current. "They won't all vote one way, and they don't need me to tell them how to vote."

For some Villarreal supporters, many of whom are torn between the two remaining candidates, the non-endorsement was a letdown.

"I think that him justifying why I've chosen this candidate over another might have helped me make a better decision," Ronkko said.

She still hasn't decided whom to vote for. Her strategy is typically to cast her ballot on the first day of early voting to avoid lines at the polls, but she needs more time to make a decision for the runoff.

She's worried about the "number of political races [Van de Putte] has been in the past few years." And the only accomplishment she could list from Taylor's time in office is "driving Uber out of town."

Strauss also said that she likely would have voted for whomever Villarreal endorsed, but she "admired" him for staying out of the fray.

"I'm going to vote, and I guess I'm leaning towards Leticia. But I'm not happy that I have to make a choice," Strauss said. "I wanted to vote for Mike, and that's it."