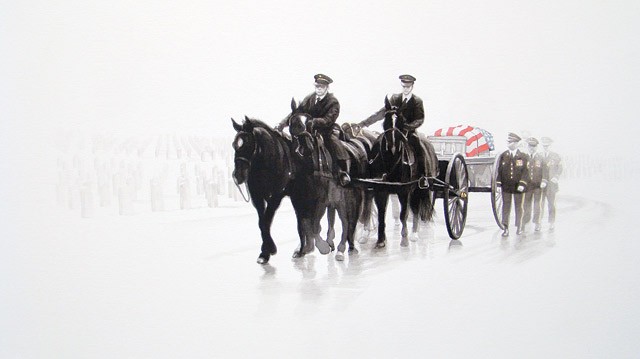 Bronze statues of warriors have gone out of fashion and it's a rare day that Big Art acknowledges those who serve in the military and that after a decade of conflict our country is still at war. In America's Finest: Recent Works by Vincent Valdez, Valdez adjusts that view by paying tribute to his close friend who served as a combat medic in Iraq. Valdez — the youngest artist to have a solo show at the McNay — is known for his fine draftsmanship, and for his depictions of boxers, who he uses as symbols to portray the struggles of individuals who live alone, without support or assistance.

While working on a recent set of large graphite drawings of boxers depicting various ethnicities: African American, Asian American, Native American, titled America's Finest, Valdez also began a series of paintings, drawings, and prints depicting the struggles of combat veterans returning home from Iraq and Afghanistan. The two collections, along with a film, are now paired at the McNay. Together, they make an almost unbearably strong impact. War is delivered to the public in action movies that portray good guys fighting bad guys, but under Valdez's hand, we are given quiet images of perseverance, and yes — death. Though the uniform is seen in abundance, we are reminded of the humanity of those who fight our wars, and the awful costs they bear.

This Sunday, Veterans Day, members of the military and their families are invited to the McNay free of charge to view the exhibition, and hear Valdez tell his friend's story. In a town ringed with bases, like the fortifications of a walled city, exhibitions such as this one should not be a rarity, though the skill and heart to make work of such intensity is far from common.

Veterans Day at the McNay