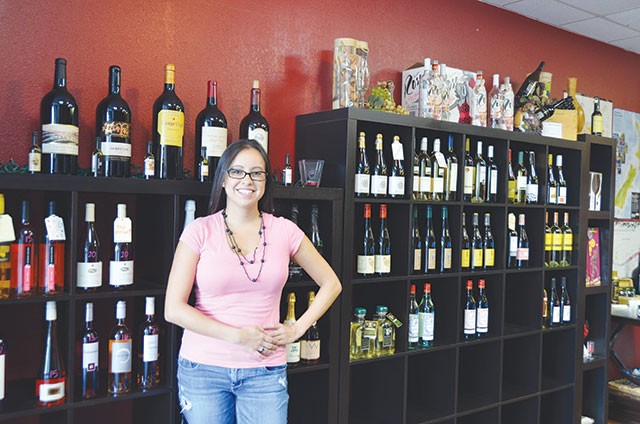 Cecilia “Ceci” Barretto is kind of a nerd, but you want an admitted bookworm to handle your wine.

As co-founder of Vinously Speaking-An Eclectic Wine Shop and blog (7271 Wurzbach, Ste 117, vinouslyspeaking.com), Barretto’s journey into the wine world began at 17 while working at French restaurant The Metropolitan (now 20Nine Restaurant and Wine Bar). In an effort to earn more tips, Barretto asked to learn more about wine. She was allowed to attend the staff wine tastings as long as her parents were present.

“I still remember tasting wine for the first time: the angels were singing and the sun was shining through a wine,” Barretto said, only half-joking.

Her journey continued at an amateur level for several years. She studied diplomacy and world affairs at Occidental College in Southern California while sipping vino in LA’s wine bars.

“I may or may not have been the girl drinking wine at college parties,” Barretto said coyly.

It wasn’t until she was about to apply to law school that Barretto’s mother took her aside and suggested she follow her passion for wine instead. This led to a trip across the pond to France’s Burgundy School of Business for a master’s degree in wine business and the eventual creation of her Vinously Speaking blog.

The opportunity to open the small shop presented itself, and Barretto, along with business partner Melissa Unsell, decided to go for it with the purpose of providing great wine on a budget.

“We’re both of the mentality where we’d rather have three bottles at $20 than one at $60,” Barretto said.

Patrons will be hard-pressed to find any bottle over $30 in the wine-walled shop, the absolute highest price the Vinously owners will put on a wine. These same customers may be frugal, but they’re also adventurous, asking for dry roses, sweet vermouths and obscure grape varieties including the Spanish bobal grape, similar to a pinot noir.

“There’s a move toward indigenous grapes in the wine world, with regions going back to their roots,” said Barretto.

Her knowledge of great, budget-friendly vinos can also be tapped during monthly Texas Cooks’ Co-Op dinners where she explains every wine selection, or during service at Mixtli (5251 McCullough), where, armed with her level three award in wines and spirits from the Wine & Spirit Education Trust, Barretto smells and tastes deconstructed dishes at Mixtli in order to find a suitable wine pairing.

Back at Vinously, the owners hosts weekly food and wine pairings on Saturdays where they give customers background information and talking points on their selections.

“When they come here, they’re going to be made to feel comfortable no matter what level they’re at,” Barretto said. “If you want me to get geeky, I’ll get geeky, but I can also break it down. We want to empower wine drinkers.”