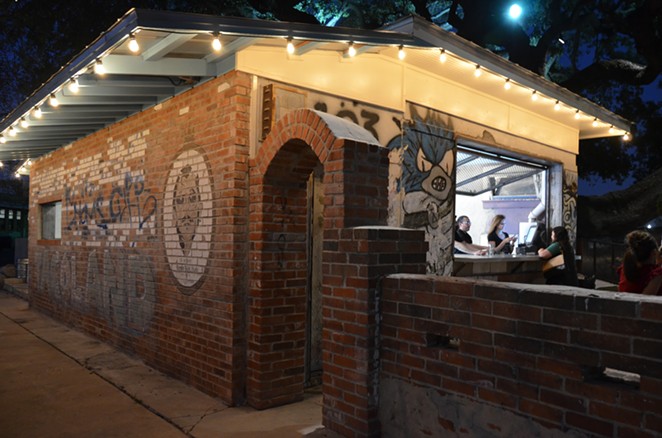 Developer David Adelman, who co-owns the property with Desperate Housewives actor and University of the Incarnate Word grad Ricardo Chavira, told news site MySA he now plans to open a restaurant at the site. Multiple posts on the bar's Facebook page announced April 28 as its last day, saying it had "outgrown this location and is moving forward to bigger and better things."

Whether or not the touted move is real, the closure should come as little surprise to those following the building's saga.

As first reported in the Current, Viva Tacoland owner Chris Erck has been locked in a year-long legal dispute with the property owners. In a lawsuit filed against Erck's company, Adelman claimed the bar owner stopped paying rent and withheld important financial information.

Over the years, Erck has left a string of shuttered bars and restaurants around San Antonio, among them Juniper Tar, Swig Martini Bar, FLiP Burgers, the Icehouse and the WoRM Tequila & Mezcal Bar.

Controversy beset his Viva Tacoland venture long before its May 2014 opening. Regulars of the original Taco Land accused Erck of trying to profit off its reputation and that of its gruff-but-revered owner Ram Ayala, who was killed during a 2005 robbery.

Some, including Hickoids frontman Jeff Smith, even met with Erck to urge him not to use the Taco Land name or Ayala's likeness. Still, Erck forged ahead, earning a social media backlash that ran the gamut from calls for a boycott to threats to torch the property.

Not surprisingly, news of Viva Tacoland's closure brought a fresh round of social media derision.

"Like punk rock music, Tacoland was a refutation of every aspiration to success measured in dollars," another chimed in. "Putting that ethic into a commercial harness... trying to 'make a business' posing as an homage to a reputation for refutation of what society calls 'a success', might always and only be doomed to fail."

Another Facebook poster shared her desire to see the site live on as a memorial to Ayala and doorman "Gypsy Doug" Morgan, who also died in the 2005 robbery.

"If only I had the money it would be a private park where any of us could hang out and do as we please under the big oak tree. I hope Ram is now resting in peace along with Doug and ALL the other TL Alumni who are now gone, but NEVER forgotten!"

However, it appears the property's developers have different plans as the neighborhood continues to gentrify. Adelman told MySA his new tenant would be a Dallas-based restaurant chain with a "cult-like following."

Hoo, boy. We can hardly wait.