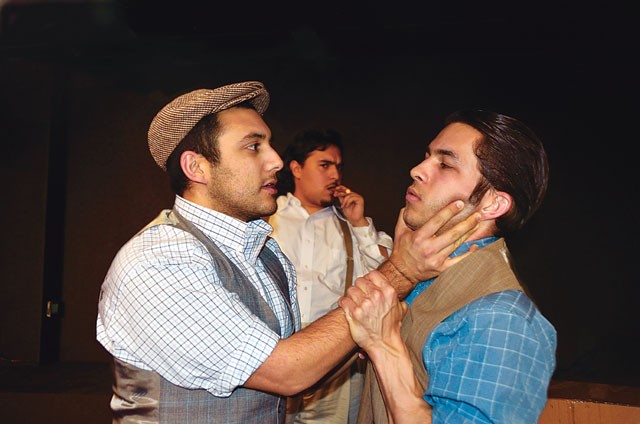 The premiere of Waiting for Lefty, by the legendary Group Theater in New York in 1935, was as sensational as the first performance of The Rite of Spring by the Ballets Russes in Paris in 1913. A bourgeois audience accustomed to the graceful movements and melodies of Coppélia and Swan Lake reacted violently to Igor Stravinsky's discordant music and the provocative gestures of Vaslav Nijinsky's choreography. And those who attended opening night of Clifford Odets' working-class drama walked out of the theater shouting, with the actors: "Strike! Strike! Strike!" The touring version of The Rite of Spring that the Joffrey Ballet brought to San Antonio last week attempted to duplicate the revolutionary production that shocked audiences exactly a century ago. The revival of Waiting for Lefty, the second production of Proxy Theatre's second season, is a facsimile faithful to the clothing, furnishings, accents, and music of 1930s New York. Lee Strasberg, who popularized the Method through the Group Theater and later the Actors Studio, might have applauded the naturalistic performances by Proxy's energetic acting ensemble.

Publicity for the production emphasizes how timely Odets' classic has become again in 2013. "I think this play is perfect to do today because it resonates so well with the feelings about our economy," states the repertory company's managing director, Kaitlin Graves. "Half the population is living paycheck-to-paycheck." Nevertheless, despite a sluggish economy and real hardship for millions, this is not the Great Depression or even the Great Recession. Outsourcing and downsizing, the twin banes of contemporary workers, are not the problems that the overworked and underpaid taxi drivers face during the union meeting that constitutes Odets' play. Union meetings seem a quaint anachronism in Rick Perry's Texas. And it is unlikely that a secretary today would attempt to console a frustrated job-seeker with a copy of The Communist Manifesto or that a doctor would be fired from a hospital because he is Jewish. Only a Cold War fossil such as Ted Cruz still baits reds. Except for the fact that the poor are always with us, that they sometimes are us, this new production of Waiting for Lefty is an homage to a signal moment in the history of American drama. It is a museum piece more than a piece of contemporary drama.

Museums, however, are not morgues. It is true that Lefty, the charismatic labor leader everyone is waiting for, is a corpse with a bullet in his head. But this concise production, barely an hour with no intermission, sparkles throughout with live energy. Even before the play per se begins, voices are raised and fights break out among a group of desperate, boisterous hackers whose livelihood is threatened by dwindling revenues and penny-pinching management. The tension never slackens until the final shout of "Strike!" Seated among the workers, each member of the audience is greeted personally on entering the theater with: "Thanks for comin' to the meetin'." Everyone — spectator, radical agitator, company spy, rank-and-file — is assembled to decide what to do about the plight of cabbies who cannot earn a living wage.

Periodically, the focus shifts to a back story of economic injustice that brought someone to the meeting and the brink of despair — including a proud husband whose inability to support his wife's expenses diminishes his manhood; a chemist who rejects a lucrative job manufacturing poison gas; a suitor whose meager prospects keep him from marrying the woman he loves. It would not do to single out any one of the nine actors, most of whom play more than one part, in an agile, able cast.

"We got the blues, the 1935 blues," complains Ty Mylnar's Sid. Though the rich still get richer at the expense of the poor, we sing a different sort of blues today. Yet, in its staging, pacing, and passion, this production of Waiting for Lefty, directed by Chelsea Taylor, is striking.