‘Walking the Camino’ Explores a Treacherous Trek Through Spain 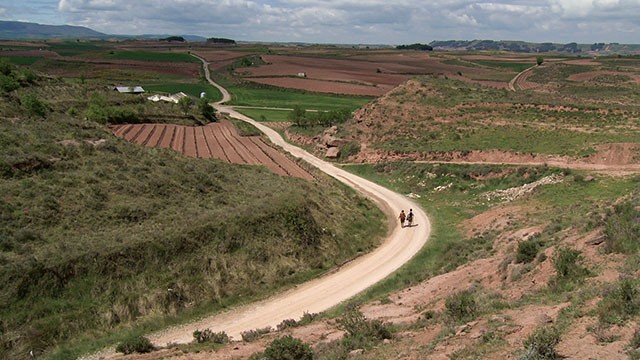 In the Middle Ages, pilgrims walked the 500-mile El Camino de Santiago de Compostela as a pilgrimage to the tomb of Apostle St. James. It was an essential part of Western European spiritual and cultural life in those times. Wouldn’t it be nice if we could ask those Medieval pilgrims why they chose to express their faith via a cross-country stroll?

We’re left with Lydia B. Smith’s documentary Walking the Camino: Six Ways to Santiago. Her film follows six pilgrims as they make their way from one end of Spain to the other. Why do people do this? Many take the journey to find an answer to a pressing question. Some want a physical challenge, some want to express their faith, some are riddled with grief and others don’t know what else to do with their lives. Walking the Camino doesn’t attempt to find an answer, because the question is more important.

Early in Walking the Camino, Annie, one of the pilgrims, is bothered by the fast pace of her fellow travelers. Everyone is passing her. An 80-year-old man with a serious spinal condition outpaces her. She is increasingly annoyed by the click-clack of walking sticks hitting the pavement, creeping behind her. Her competitive nature is so ingrained that she finds it difficult to enjoy the walk without judgment. On the 25th day she arrives at La Cruz de Ferro, the highest point of El Camino de Santiago, where tradition says that you leave something of yourself behind. She chooses to leave a rock symbolizing her competitiveness. By the end of her journey, Annie would rather “notice the flowers and the grass” than be the first to finish—and that is what Walking the Camino is all about.

I think Ralph Waldo Emerson summarized this film before it was ever dreamed up by Smith when he wrote, “life is a journey, not a destination.” Smith lets the pilgrims ponder their purpose without judgment as she watches, observes and does little editorializing. More importantly, Walking the Camino doesn’t judge the pilgrims for their lack of direction. They are all walking the same pilgrimage, but they are unsure why. Isn’t that analogous to life?