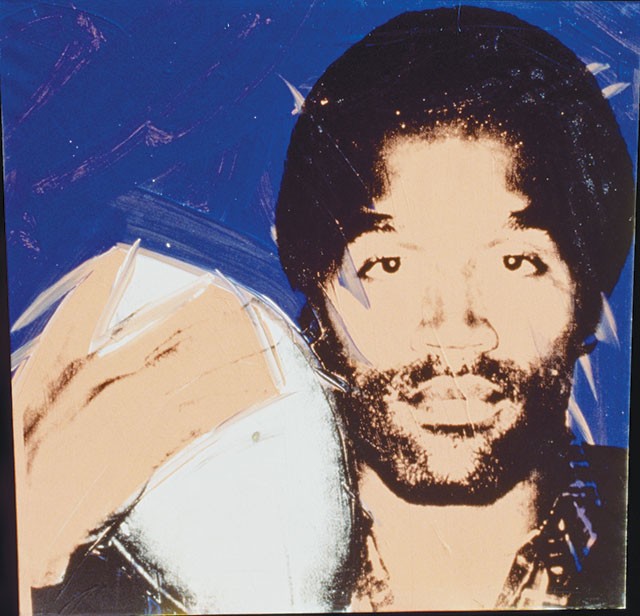 In 1977, Richard Weisman, the investment banker son of Los Angeles-based art collectors Frederick and Marcia Weisman, spent $800,000 commissioning Andy Warhol to create the Athletes Series, 10 photo-based portraits of celebrity sports stars of the era, ranging from skating champion Dorothy Hamill to NBA scoring sensation Kareem Abdul-Jabbar. Weisman said he hoped “the series would inspire people who love sport to come into galleries, maybe for the first time, and people who liked art would take their first look at a sports superstar.”

But the Athletes Series was a commercial and critical bust for Warhol when it first toured to New York, London, Toronto and Cologne. Art critics tended to think Warhol was merely extending his exploitation of celebrities, while sports fans apparently didn’t appreciate having their heroes swaddled in gauzy pop colors. The Athletes Series is much less celebrated than Warhol’s movie star portraits, but it’s still a coup for the San Antonio Museum of Art to have the series in its Great Hall.

In 2011, Christie’s of New York sold a complete set of the screenprint on canvas images, most signed by the subjects, for almost $5.7 million, an impressive return, though not even close to the $12 million price tag attached to a single portrait of Charlie’s Angels sex symbol Farrah Fawcett fought over last year by the University of Texas board of regents and Love Story movie star Ryan O’Neal.

Warhol spent two years photographing the athletes, who were selected by Weisman because the artist “didn’t know the difference between a football and a golf ball.” Golf great Jack Nicklaus became miffed when Warhol asked him to move his “stick,” which Nicklaus curtly told him was a “club” and then asked Weisman if the artist knew what he was doing. Warhol, of course, knew exactly how to create indelible impressions of some of the first sports superstars to ride the monster wave of commercialization that likely made them more famous as advertising models than athletes.

Using his Polaroid Big Shot camera, Warhol took around 60 images of each athlete, selecting four to be made into screens, which accounts for the variations in different sets of the portraits. Assistants pre-painted the 40-by-40-inch canvases in two different flesh tones. Then Warhol applied colored areas for the eyes, lips, hair and clothes, and the silkscreen was used for the final layer. Using a palette knife, the back of a paintbrush and his own fingers, Warhol added thick, expressionistic flourishes while the paint was still wet, providing an extra dimension of dynamism unique to the Athletes Series.

With one eye cocked, fists raised and playfully ready to punch the camera, Muhammad Ali inhabits the most successful portrait of the series. The rest, however, are posed rather statically with a symbol of their sport. Chris Evert could be a wistful girl contemplating her image in a hand mirror, though she’s holding a tennis racket. Abdul-Jabbar’s bright eyes and soccer wiz Pelé’s gleaming smile out-pop the pop palette. O.J. Simpson presses a football to his face, sporting a five-day stubble, which Weisman said made him “look like a criminal”—little did he know 36 years ago. Without the paint and pigskin, Simpson’s portrait easily could be mistaken for a mug shot.