It’s easy to get jaded and to imagine that the world, with distance negated by various technological innovations, holds no more quaint surprises or inspiring discoveries. Let’s call this the Seen It All Effect.

If you’re like me, however, then Rollergirls: The Story of Flat Track Derby, a new book from Trinity University Press, can be a small but powerful reminder that there’s no excuse for such pessimism.

The book tells the story, mostly through the exquisite black-and-white photography of Felicia Graham, of the the Texas Rollergirls, a pioneering group of women that created an international sport and discovered their own inner strength in the process.

The fact that I was, until encountering this book, largely ignorant of the details and scope of this group’s inspiring story, even though it happened in my own lifetime and in my necks of the woods, is a testament to the all the powerful everyday stories that, all over the world, still remain to be told and learned from. Seen It All Effect be damned. 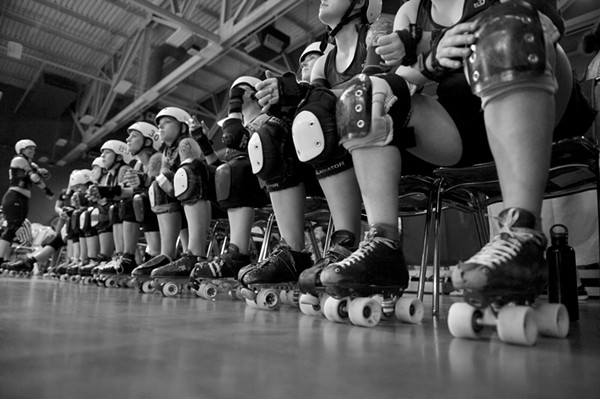 In those earliest days, the whole affair was a silly, stodgy, disorganized, coed affair — really more of an interesting side show than a legitimate sport. The Texas Rollergirls, which Joulwan refers to as “a rag-tag bunch of bartenders, waitresses, teachers, dancers, artists, musicians, office workers, feminists, introverts, extroverts, athletes and klutzes,” made roller derby into a femme-powered (and woman-empowering) sport.

Today, as a testament to the spirit (never mind the organization) that these women built, the Women’s Flat Track Derby Association, an international governing body for the sport, oversees nearly 470 individual flat-track derby leagues all around the world.

Through her photographs, Graham, who spent 11 years documenting the rise of this rare and rowdy group, captures the empowering essence, the camaraderie and the sheer joy of the sport and the endeavor to make it into something sustainable. A mix of truly badass action shots, casual profile portraits that capture big personalities as well as moments of agony and ecstasy, and crew snaps, the photos selected for inclusion in this book are stirring.

Graham managed to somehow capture the spirit of power and togetherness that Joulwan poignantly describes in her foreword. “Our uniforms, the freedom of flying around the track and the adoption of our playful and powerful names transformed us into the versions of ourselves we always wanted to be,” Joulwan writes.

And, as readers of the book, regardless of our previous experience with the sport or its origins, we can’t help but agree with Joulwan’s assertion that “There’s something irresistible about the singular combination of femininity and fierceness embodied in a warrior woman on wheels.”