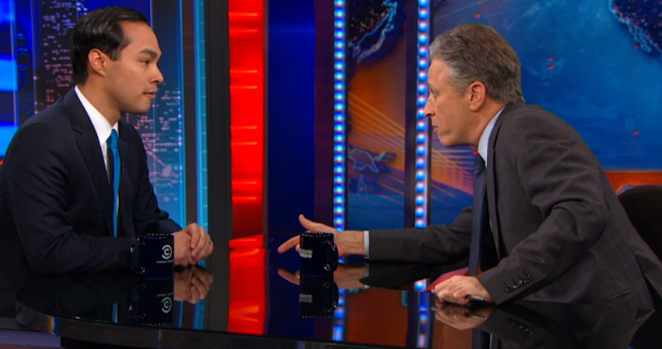 Secretary of Housing and Urban Development Julián Castro appeared on The Daily Show last night. The current Washingtonian braved the East Coast blizzard to talk up a new FHA mortgage reduction program, which is what one generally goes on a talk show to promote when they don't have a book or movie coming out.

"You are so much better looking than your brother," Stewart quipped. Congressman Joaquin Castro's appeared on the program last November, which must've sparked a bit of jealousy at the Thanksgiving table.

For an interview that had the phrase "capital reserve ratio" thrown around multiple times, the former San Antonio mayor held his own, considering Stewart grilled him on the housing crisis and HUD's mistakes before Castro's arrival. President Barack Obama will be happy to know that our boy Castro hit all his talking points.