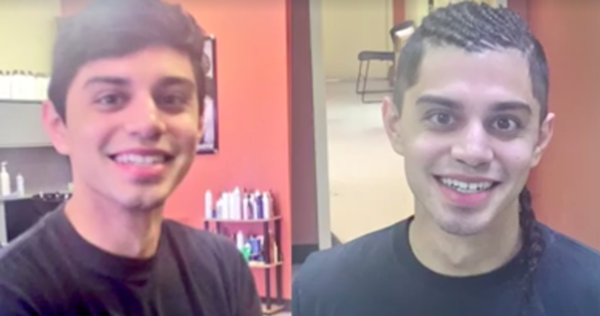 Sacrifices had to be made to get Spurs forward Kawhi Leonard to start the NBA All-Star game. Leonard made most of them, but one Spurs devotee did his part too. Or his hairstyle did, at least.

If this gets the 12K retweets that Kawhi Leonard needs to start in the All-Star game I'll get cornrows #NBAVote pic.twitter.com/SCmrgXGNkL

The NBA used #NBAVote to track fans' votes for the All-Star game starters. And Neubauer's efforts apparently helped do the trick: After Golden State Warriors forward Draymond Green led in every set of the voting returns, Leonard surged past him to claim a starting spot.

Neubauer was true to his word. The Spurs posted a video on their Facebook page today of him getting his new 'do:

Kawhi All Star Tweet Leads to Cornrows for One Fan

This Spurs fan stuck to his word & #SpursNation helped make it happen.

I doubt Neubauer predicted he'd also get a sweet rat tail out of the deal. But they call them red-letter days for a reason.

Leonard is one of the few cornrow’d players in the NBA (gone are the days in the mid-2000s when it seemed like everyone, and we mean everyone in the association had them). The All-Star game, Leonard’s first, will be played on Sunday, February 14 in Toronto.