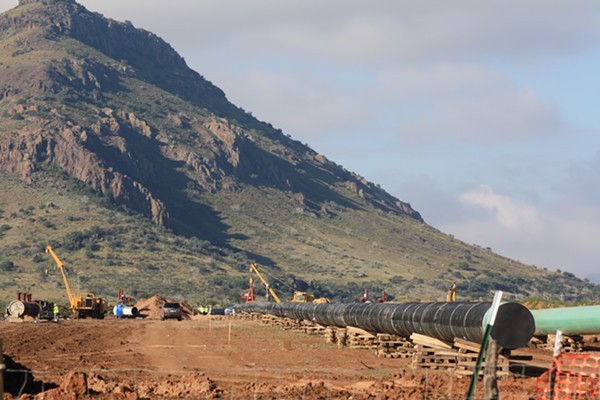 Members of the Society of Native Nations and Big Bend Defense Coalition, two of several groups fighting the construction of the Trans-Pecos Pipeline, chained themselves beneath an excavator while others ran deeper into the easement and occupied sections of the disjointed pipeline itself.

The event represents yet another escalation in a two-years-long-running struggle that has moved from local coalitions fighting state and federal regulators, regional land owners resisting eminent-domain property seizures in the courts, and, most recently, increasingly indigenous-led direct actions intended to more directly interrupt pipeline construction. In recent weeks, several native-run camps have been established in several area counties, including Presidio, Brewster, and Reeves.

Owned by Dallas-based Energy Transfer Partners, the primary force behind the Dakota Access Pipeline being resisted by the Standing Rock Sioux and native and non-native allies from around the world, the 42-inch Tran-Pecos Pipeline is intended to transport fracked gas 148 miles from outside Fort Stockton, Texas, and beneath the Rio Grande, to join an expanding network of natural gas infrastructure in Northern Mexico. (See our recent feature on the connections between the resistance at Standing Rock and the fight over the Trans-Pecos pipeline in West Texas.)

Mexico’s Department of Energy’s five-year plan for energy reform projects (2015-2019) has focused on the enhancement and expansion of natural gas infrastructure across the country, including feeding U.S. resources into a network of existing pipelines in Northern Mexico. New lines in the states of Chihuahua, bordering Far West Texas, and Tamaulipas, which run alongside South Texas, and Nueva Leon, are expected to be finished in the next three year, according to the plan.

Greg Harman is an independent journalist, former San Antonio Current editor, and founder of Deceleration.news, where this report first appeared.