Converse’s Chuck Taylors are continually fashionable. Poison frontman Bret Michaels stars in one of cable television’s most popular reality programs. Hell, even once-forgotten teen heartthrobs like Jason Bateman are relevant again. So the resurgence of records shouldn’t be altogether surprising — Americans, after all, are notorious for embracing favorites of yesteryear.

But seriously, vinyl? In an era when music can be purchased — or stolen, for that matter — from the comfort of one’s own PC, are we really so nostalgic we’ll buy scratchy old records to relive the glories of songs gone by?

The answer, apparently, is yes.

According to a time.com report earlier this year, 990,000 vinyl albums were sold in 2007, a 15.4-percent increase from the 858,000 records moved the previous year. Though local store 180 Grams is closing shop at month’s end (see side bar, 53) other San Antonio record-store owners agree — vinyl sales are on the rise in the Alamo City.

That sales increase, the owners contend, stems mostly from the raw, more intimate sound often provided by records in comparison to impersonal mediums like CDs and mp3s, not to mention the nostalgia that one experiences from spinning a classic like Dylan’s Blonde on Blonde or Springsteen’s Born to Run on a turntable.

“With vinyl, people like the sound better than CDs,” says Gary Smith, co-owner of CD Trader. “With a lot of CDs, you just don’t get that same quality.”

Vinyl’s resurgence has not been lost on San Antonio’s flock of record-store owners, who have stocked their shelves with everything from brand-spanking-new mainstream releases to old-and-dusty classics to the flat-out obscure. Here are five of the foremost authorities on local vinyl retail.

Considering it’s located on the third floor of an antique mall in the downtown area, you’ll know what to expect upon entering this shop — oldies ... lots and lots of oldies. Though Alamo Records features a sizable section dedicated to 1960s-80s mainstream, the charm of the store is found in the more obscure records resting on the shelves, on the floor, and in boxes strewn all about the place.

CATERS TO: Music historians; anyone born before 1950.

A SAMPLING: Aretha Franklin, Aretha Now; The Knack, Get the Knack; Gladys Knight and the Pips, Anthology

OF NOTE: Of the record stores visited by the Current, Alamo Records stocks the biggest collection of vinyl — by a rather substantial margin.

Not only a place to purchase music, but also a place to discuss music, CD Trader features predominantly old-school rock and metal, everything from Iron Maiden to Slayer to European bands the likes of which you’ve probably never heard. And should you desire more info on a particular release, co-owner Gary Smith — as evidenced by the Current’s recent trip to CD Trader — will be more than happy to oblige you with some music-related conversation and advice. In addition to a stacked collection of vinyl, CDs, and even cassette tapes, CD Trader features novelty items like Rob Zombie and Misfits lunchboxes, autographed pictures, and even a 2-foot-tall Ace Frehley KISS doll.

OF NOTE: CD Trader isn’t limited exclusively to metalheads of years gone by, as evidenced by copies of Fleetwood Mac’s Rumours and Limp Bizkit’s Chocolate Starfish and the Hot Dog Flavored Water. Yes, they actually released the latter on vinyl.

Perhaps the most revered record shop in San Antonio, Hogwild has achieved such a feat for two reasons — its proximity to SAC’s legion of music-craving students, and the diversity of its inventory. Punk, rap, jazz, rock — the list goes on. Whatever your taste in music, Hogwild probably has something to satisfy it. And in addition to loads of newly released albums from contemporary bands like the Killers and the White Stripes, Hogwild also features used records from bands of yesteryear like the Beatles and the Rolling Stones.

CATERS TO: Those who answer “What kind of music are you into?” with, “Oh, I listen to a little bit of everything.”

OF NOTE: If you’re a musician looking for a band, or vice versa, Hogwild allows locals to post music-related “help wanted” clippings.

If you’re in the market for vinyl of the Tejano or conjunto variety, and you’re not shopping at Janie’s Record Shop, you’re probably in the wrong place. The locally owned retailer, in addition to a hefty vinyl selection, also stocks a plethora of rare and out-of-print CDs, and even some cassette tapes. Plus, the friendly and conversational staff is one of the more musically knowledgeable the Current encountered while on its local record store excursion.

CATERS TO: Fans of all things Tejano and conjunto; collectors on the hunt for rarities.

OF NOTE: Janie’s stocked plenty of Gabe Garcia’s music before the local guy hit it big on Nashville Star (an autographed Garcia photo also resides on a store wall). Now, the store is receiving ’round-the-clock calls from record stores nationwide, hoping to secure some of Garcia’s pre-Star work. In fact, during the Current’s late-afternoon visit to Janie’s, store employees were busy addressing Garcia-related envelopes to a slew of music retailers.

If ever there was a record store that catered to the Facebook crowd, it’s Music Town. Run by Brent Evans, the 16-month-old shop features mostly contemporary favorites like Radiohead, Spoon, and Animal Collective. Of course, Music Town doesn’t cater exclusively to fresh-faced youngsters — its biggest vinyl seller to date is The Beatles’ Abbey Road.

CATERS TO: Indie hipsters, anyone born after 1975.

OF NOTE: Should you desire a title that isn’t in stock, Evans will order it and have it shipped to the store. • 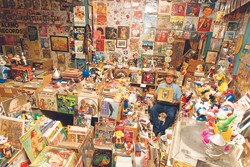 Jesse Garcia wants to improve San Antonio’s live-music scene, so much so that he’s putting his record store on hold to do so.

Garcia, the owner of 180 Grams, says he’s closing the shop’s doors at the end of the month in order to devote more of his time to luring popular indie acts to San Antonio for live shows. Garcia’s lease at 180 Grams’ current location on San Pedro expires at the end of the month, and since he couldn’t find a more spacious locale suited to in-store appearances and other live shows, he’s putting the business on hiatus while focusing on the live-music aspect.

“I want to bring bands to San Antonio that may be going to Houston and Austin but are not coming here,” Garcia says. “Now I can focus on touring bands like that.”

Garcia, however, isn’t giving up on the music retail business altogether. He plans on leaving myspace.com/180grams open as an online outlet for music, and he says that he will increase the store’s platter inventory upon re-opening the store in its physical form. After all, he contends, records are back in vogue.

“When `180 Grams` comes back, I want it to be more vinyl-oriented,” Garcia says. “Until then, I want to keep the store in the public eye.”