We Fink U Freeky: Why Die Antwoord is the Answer 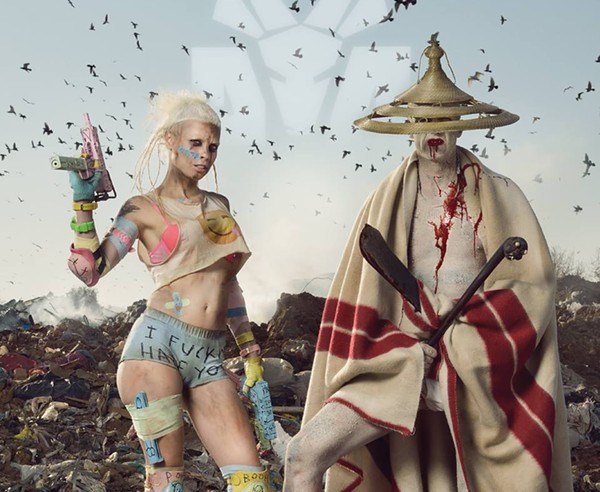 Hailed as one of the most bizarre groups in recent pop music history, South African rap-rave trio Die Antwoord, made up of Ninja, Yo-Landi Visser and DJ Hi-Tek. They're like a zef Cerberus, a foul mouthed three-headed entity that slays and kills whatever they touch, from toy making and starring in films (2015's Chappie and Harmony Korine's Umshini Wam), to the shock-rap that made them famous.

Like an albino manic pixie who haunts dreams with baby doll coos, Visser turns into a blinged-out nightmare when she raps, sometimes with sweetness, other times with brutal intensity. Heavy Afrikaans-accented rap assassin Ninja, who sways between swaggering fuckboy on the mic to a sincere romantic ("Ugly Boy"), is the masculine answer to Visser's savage femininity.

Their weirdness and penchant for controversy make them demented champions for offbeat music that broke into the impossible: the mainstream. Set to release their fourth full-length album, Mount Ninji and Da Nice Time Kid, on September 16, Die Antwoord's evolving style shows no signs of running out of magic.

Gossip broke out a couple days ago among most major music pubs about a rumored breakup that'll go down after their fifth album and once the group completes a planned feature "gangster film." To be sure, this doomed prophecy is nothing new, and both members continue to deny of the claim. Ninja announced six years ago after Die Antwoord's debut $O$ was released that the band was finite and the members planned to pursue other projects after their fifth album was finished.

And in another recent headline-making incident, Die Antwoord called out the Hot Topic-branded movie Suicide Squad for "jockin' our style," complete with a mini-clip comparing Joker and Harley Quinn's costumes to themselves — including a long trench coat, tattoos and Ninja's pop art style — on Visser's Instagram profile.

No one is safe from Die Antwoord. Lady Gaga was caught in a feud with Die Antwoord after she invited them to open for her South Africa tour, causing her to be the subject of "Fatty Boom Boom." In the music video, Gaga, played by a drag queen in her infamous meat dress, visits the gynecologist to remove a prawn, only to be mauled to death by a lion at the end.

There's a method to Die Antwoord's madness. Even throughout DA's well-documented history from 2009 to the present, their origin story still feels kinda shaky. Ninja - born the much less cool name Watkin Tudor Jones - and Yo-Landi Visser (Anri du Toit) have spun an ever-changing genesis story. They share a daughter named 16, now deny they're still romantically involved with each other. Perhaps their origins will forever be a mystery - and that's what makes Die Antwoord unique. Whether they've known each other since they were "very small" or meeting each other as adults at a library, it doesn't matter in the great scheme of Die Antwoord, but it does shed insight onto their humble beginnings. On YouTube, various videos exist of their projects proto-DA, including their most notable group, Max Normal.TV.

While Max Normal.TV only has two full-length albums and a handful of singles, their YouTube videos give a glimpse into what was before they blew up. "Total Fuckup," just like the title suggests, is a breakdown by Jones about why he's failed to be a successful rapper. About 3.23 in, Jones plots a way to become a rap star by getting into the "new rave scene" and by changing his style, look and accent. Enter Die Antwoord. Their trademark song and debut single "Enter the Ninja" can be looked at as a response to "Total Fuckup." Gone are Jones' (now Ninja) insecurities and doubts, as his new cocky and boastful alter-ego takes over.

Rising above their squalid South Africa beginnings to become international celebrities, Die Antwoord (which is Afrikaans for "The Answer") have found the meaning.

Catch Die Antwoord at the Aztec Theatre October 4, at 7pm. Tickets can be bought here.  And check out Die Antwoord's video for "Banana Brain" from their upcoming release: