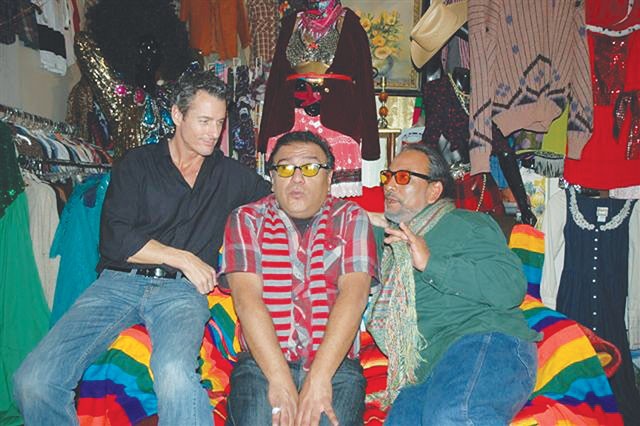 A big, ivory-colored dildo hits the concrete floor awkwardly after the owner of Jive Refried Vintage throws it at a Southtown customer. But this isn’t actual Refried owner-cum-fashion designer Agosto Cuéllar in a lather, but a fictionalized version of him acting out in a new comedy web series, JiveTown, which is loosely based on the real Cuéllar’s experiences as a vintage-shop owner. “That really didn’t happen,” said Cuéllar, who recently closed his business of 13 years [See “Fear of loafing in Southtown,” July 13-19]. “I have plenty of real stories I’d like to see filmed if they decide to do a second season.”

Until then, the first season, directed, co-produced, and co-written by local filmmaker Kimberly Suta, is a miscellaneous and occasionally humorous collection of oddball scenarios centered on Gus (Theo Gutiérrez as faux Cuéllar) and the diverse characters that come to peruse his clothing racks.

Shot last December in a flourishing Jive Refried packed wall-to-wall with scarves, cowboy hats, jeweled dresses, and sarapes, the first roughly edited six-minute episode debuts online August 4. It features Gus venting into the deaf ears of Vicodin-poppin’ shop employee Gabe (Richie Giddens Jr.) about his fashionista struggles fighting off an afternoon full of extravagant visitors, including a preacher turned sex-toy salesman and a drug dealer pulled straight out of My Name is Earl.

Suta, who works out of the space adjacent to the now-closed vintage shop, was inspired to make a series about the wild situations she witnessed in and around Jive Refried and the unbelievable stories Cuéllar shared with her over the years. “Jive Refried was always the central hub for all the craziness that goes on in Southtown,” said Suta. “You really couldn’t write some of the stuff that went on there.”

Admittedly, the first season of JiveTown isn’t as fact-based as regular visitors may expect. While Suta has borrowed heavily from Cuéllar’s life and status, she has also tweaked elements of Jive world, making it even more outlandish. Fortunately, creative license wasn’t used to play up Gus, whose soft-spoken dialogue is made even funnier when sustained by underlying self-pity. Gutiérrez, who is not homosexual in real life, said he had to find a comfortable balance to match the real Cuéllar’s subtle mannerisms and laid-back demeanor. “It was funny because at one point Agosto looked at me and was like, ‘You’re too gay, man. You need to tone it down because I’m not that over the top,’” said Gutiérrez.

Now, questions exist regarding the future of JiveTown since Jive Refried is no longer part of the Southtown community. Depending on the response to Season 1, Suta says a second season could include major changes in format. Some of those changes could include storylines that follow Cuéllar’s life post-Jive Refried. Or they could keep the webisodes set in a vintage store by switching locations. “Now that the store has closed, it’s all up in the air as to how the show is going to evolve,” she said. “The series could take on a life of its own … or it could totally flop.”

If JiveTown does find an audience and survives its first season, Cuéllar says he would like to take a more active role in behind-the-scenes production. Armed with journal upon journal of story ideas he jotted down during business hours, Cuéllar has enough material to strengthen his Jive Refried brand and build a JiveTown epic if he wanted.