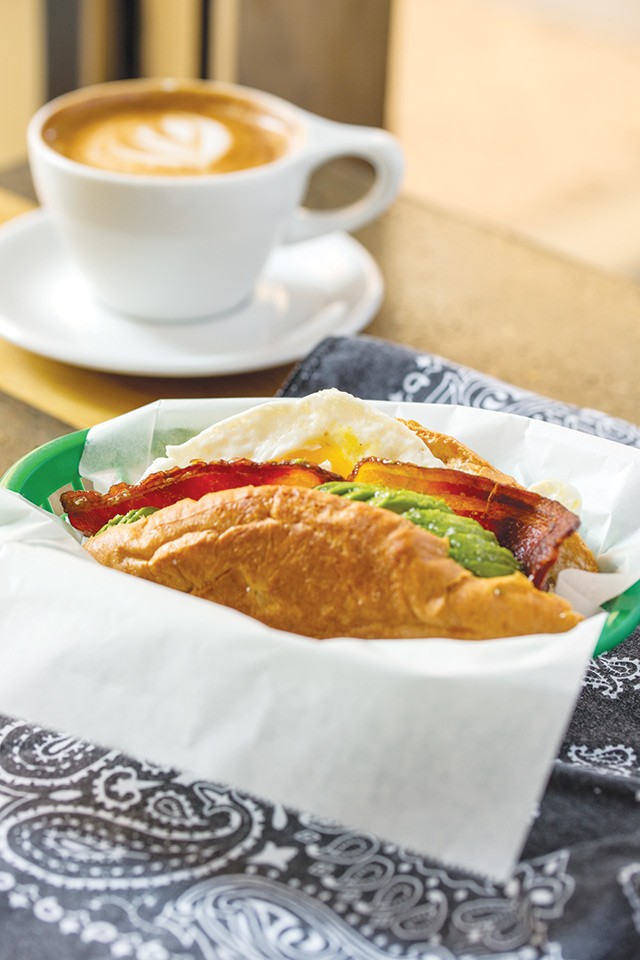 Let’s get this out of the way—I’m a fan of Andrew Weissman’s work. Minnie’s Tavern & Rye House elevated the former Liberty Bar space and makes for a solid date night (get there ASAP!). The Luxury is literally down the street from us here at the Current and we’d live off those fries if we could. Il Sogno’s the place for power breakfasts over coddled eggs, fluffy frittatas and tableside Nutella. Sandbar flies in delicious and fresh North Atlantic oysters. I’m a fan.

So when I learned that Weissman would be taking over Sip, I was intrigued, but apprehensive. My love for the turkey and artichoke spread panino, available on the old menu, was rivaled only by the chicken, spinach and brie take. As plenty of online commenters asked, “Why fix what’s not broken?”

To be sure, Weissman isn’t fixing anything—he’s upgrading. The chef took over the Sip reins this January from his sister, who owned and managed the restaurant since the early 2000s. At the time, Weissman was disheartened by the city’s slow uptake to quality coffee and French patisserie-style baked goods. But that was then, and this is now and San Antonio is working on its hip factor, no?

If Sip Sr. was the steadfast go-to with matter-of-fact café tables and efficient lunch, Sip Jr. is adding a bit more flair. Gone is the black-and-white photography and in its place is a wall menu designed by restaurant artist du jour Robert Tatum with wide-eyed cats, caffeinated birds, wheel-clad snails, a robot and a mustachioed carrot bandito. You’ll find brewed sips, “more than sips,” “tossed and mix’d” fare and “squeezed sips” with prices ranging anywhere from $2.50 coffee, $4 for granola to $9 for a juice that promises a “good body.”

The restaurant seems to finally make use of its digs—expertly, instead of accidentally. Ordering has been made easy, as the counter received a bit of a makeover and orders are now placed on the back end of the eatery. The outward-facing bar has been replaced with tiny café tables that line the left side of the space. Two tall wooden bar tops command the front of the house where business-types are seen holding meetings.

It’s as if Weissman played curator by bringing to Houston Street boutique roaster Cuvee Coffee (out of Austin) and a line of house-made juices, both of which are gaining traction with San Anto eaters by the hundreds, while also adding items for which he’s already lauded. I could have easily enjoyed The Standard with crisp bacon, lettuce, tomato, a healthy serving of avocado and a fried egg ($7) at The Luxury. Messy, yes, but also hits the spot if you’re feeling ravenous. It was definitely a suitable replacement for my beloved turkey and artichoke panino.

I paired it with “The Science,” a juice of celery, apple, lemon, ginger, garlic, sea salt and basil. The flavor was refreshing and healthful if you’re into that sort of thing, but I would have preferred a handful or two of ice to help mellow out the tanginess.

During my return visit for lunch some days later, Sip was hopping with patrons. A peek into its corporate nemesis, Lady Starbucks, revealed Sip was catering to more downtown denizens, at least for the time being. Geekdom natives and tourists alike lined up to order sandwiches and caffeinated brews. I joined the line and ordered The Italian, with copa, spicy salami, prosciutto, cheese and a briny jardinière similar to olive tapenade. Pressed, The Italian could have easily veered into oily territory, but it didn’t and each bite held that promised meaty goodness.

My eating partner opted for The Classic, a fun take on a Caesar salad, with Romaine spears, a sliced hardboiled egg, whole anchovies and shaved Pecorino. I expected to be turned off by the tiny swimmers, but was pleasantly surprised by their delicate flavor—a definite hit for this hearty salad.

The Middle Eastern mix’d salad was no slacker either. Chilled Israeli couscous tossed with diced carrots, tomato, toasted almonds and just a smidge of turmeric, sat on a bed of butter lettuce topped with a dollop of creamy and sour labneh. It was filling without being gluttonous—a common error in salads these days. I again tried my luck with the juice, a “Pura Vida” this time. The magenta concoction’s beet, pineapple and apple elements were lost to way too much lemon—a total miss.

Weissman’s return to Downtown is well on its way to joining the ranks of his other riverside institutions. And this time, San Anto’s ready for it.

160 E Houston,
(210) 222-0149
Skinny Weissman takes over the reins of Sip with a new menu, a coffee program and juice options that help bring Downtown into a new age.
Best Bets Sandwiches–The Standard, The Italian; Salads–Try The Classic or The Middle Eastern
Hours 7am-??? Tue-Sat
Price $2.50-$4 coffee, $4-$9 granola, sandwiches, salads, juices