West Fertilizer Co. and the Politics of Disaster 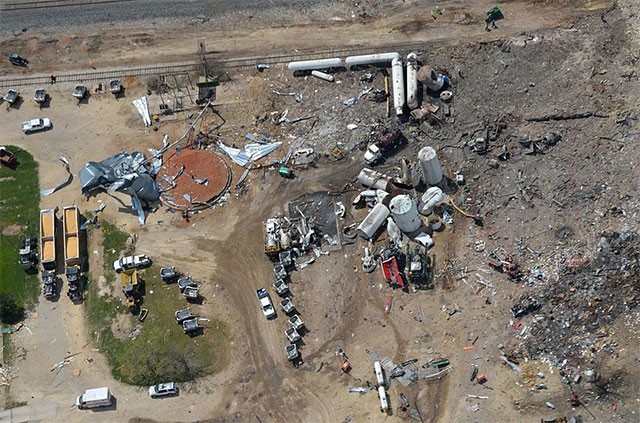 As the cloud from the West Fertilizer Company explosion filled the Texas sky and the horrific details from the small community of West began to roll in over the news last month, many older Texans were probably reminded of the tragic Texas City explosion of 1947. On that fateful April day, a Europe-bound ship laden with fertilizer in the Port of Texas City exploded, setting off a chain reaction of fires and explosions in the town killing 581 people. It still stands as the worst industrial disaster in American history.

When I saw the first photos coming in from West I was instantly taken back to 1997. I was starting my eighth grade year at Stevenson Middle School on the northwest side of San Antonio. An explosion at the Columbia bowling ball factory started a fire that quickly consumed the building. Every available firefighter in the city was called in to fight the blaze, and a half-mile perimeter around the factory that included two schools and a daycare was evacuated.

Since 1973, Columbia accrued 89 citations for safety violations. Just six years prior to the fire, an Occupational Safety and Health Administration (OSHA) inspection garnered the company 12 violations, including eight deemed “serious,” two of which involved the maintenance of flammable and combustible substances on the premises.

Six months later, the National Foam Cushion plant in Natalia, just 30 miles south of San Antonio, caught fire and burned to the ground. The factory had two small fires in the previous year including one that occurred just days before the plant burned down. Residents and school children were evacuated and Natalia had to call in the San Antonio Fire Department to help contain the blaze.

OSHA cited the company for safety violations in 1994. Three of the serious violations involved their fire extinguishers. Natalia’s fire chief repeatedly asked to inspect the plant, but was “blown off” by the company.

Like Columbia Industries and National Foam Cushion, West Fertilizer had a history of safety violations. In 2006, the Texas Commission on Environmental Quality visited the site and fined the company for failing to get a permit for its massive ammonia tanks. That same year, the Environmental Protection Agency fined West Fertilizer for not filing a Risk Management Plan with local emergency responders. According to a report in the Dallas Morning News, that plan claimed the fertilizer stored at the facility posed no risk of fire or explosion. In 2012, the Pipeline and Hazardous Materials Safety Administration fined West Fertilizer $10,000 for failing to safely transport anhydrous ammonia, an extremely explosive fertilizer ingredient that many claim caused the recent explosion.

OSHA, the federal organization tasked with assuring the safety of American workplaces, had not inspected the West Fertilizer Company premises since 1985. At that time, OSHA fined the company a paltry $30 for a serious violation regarding the storage of anhydrous ammonia on the site. Where had OSHA been in the almost 30 years between its last inspection and the present disaster in West?

Created in 1970 after intense lobbying from labor unions, OSHA inspections and regulations led to an immediate decrease in workplace injuries and fatalities. However the ascension of Ronald Reagan in the 1980s, with his focus on small government, sent the agency into a tailspin. Cuts to OSHA’s funding became a regular part of yearly budget compromises. Under industry pressure, OSHA adopted a policy of voluntary compliance wherein business was entrusted to regulate itself.

The 30-year assault on OSHA’s budget led to the dwindling effectiveness of the agency. The number of OSHA inspectors peaked in 1980 at 2,950. Today, with 50 million more workers in the workforce, OSHA’s staff has been reduced to 2,178. The continual creation of bureaucratic hurdles means that it now takes eight years for OSHA to promulgate simple regulations. The organization is so understaffed and underfunded that it can only inspect each workplace in the country once every 175 years. Its paltry annual budget of half a billion dollars is 15 times smaller than that of the Environmental Protection Agency.

Cuts to OSHA mean serious consequences. In 2011, the latest year for which the Bureau of Labor Statistics has full statistics, more Americans died from work-related accidents (4,609) than died in the entire eight-year war in Iraq; and 2011 was a down year due to high unemployment. In the 20 years spanning 1992 to 2011, almost twice as many Americans died in work related accidents (115,007) as died in the 20-year Vietnam War.

In Texas, where Governor Rick Perry has worked hard to create a business-friendly, anti-union atmosphere, Texans have been forced to pay an especially high toll. With only 98 OSHA inspectors in the state, Texas has the fourth highest ratio of workers to inspectors in the country. Texas led the nation in work-related fatalities in 2011 with 433, outpacing the next state on the list, California, despite California’s much larger workforce.

Many labor rights advocates hoped that the election of President Barack Obama would lead to a revitalization of OSHA. But the agency continues to be the target of Washington belt tightening. Cuts mandated by the Sequester (8.2% for OSHA) will only increase the number of already-planned layoffs for fiscal year 2013.

Going to work remains one of the most dangerous things a person can do in the United States. This is especially true in the state of Texas where politicians like George W. Bush and Rick Perry have spearheaded a hands-off approach when it comes to business. With the much-hyped effort to “turn Texas blue,” one wonders whether OSHA can be saved, at least in this state. Or will it be politics as usual?

Mary Anne Henderson is a SA native currently pursuing her Ph.D in history at University of Washington, Seattle.