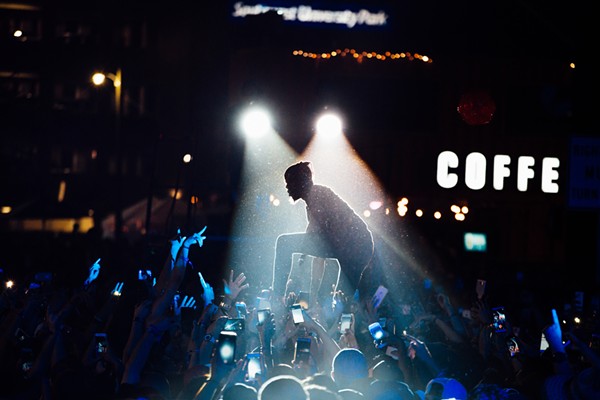 When Detroit rapper Big Sean swept through town in December 2011, fresh off his first album with Kanye West’s GOOD Music label, his San Antonio debut at the White Rabbit was the biggest show Kevin Hayden had ever been tasked with promoting.

A fixture in San Antonio’s rap and hip-hop scene, Hayden (or “Pha” as most people know him) had just started working for ScoreMore Shows, an Austin-based concert promotion company that had somehow grown from hyping shows out of a UT-Austin dorm room to booking clubs and festivals across the state that lure in thousands. Hayden was one of the first signs ScoreMore wanted to branch out to the untapped San Antonio market.

But ScoreMore wasn’t yet convinced San Antonio was worth all the effort, Hayden says. As he puts it, for a long time the city had been “kind of an awkward market,” particularly when it came to booking rap and hip-hop. Producers rarely brought top talent here. Too often, the shows that did happen were a disaster. “For a long time, people were promoting rap shows here where the rapper wouldn’t even show up,” Hayden says. “There was a lot of skepticism,” he says, both from the audience and promoters wary of the market.

Big Sean, he says, was a test case – and they killed it. After selling out the White Rabbit, Hayden says Claire Bogle, a ScoreMore co-founder, told him as much. “She came out at the end of the show and said, ‘Look, we were gonna leave the market if this didn’t do well.’” Instead, ScoreMore kept booking San Antonio. The next year, they brought in Kendrick Lamar for another white-hot, sold-out performance at White Rabbit. Within a couple years, they were booking shows at Alamo City Music Hall, turning the club into a new rap and hip-hop epicenter on the city’s near east side.

This weekend’s Mala Luna Music Festival will be another San Antonio test case for ScoreMore, the brainchild of Bogle and Sascha Stone, one of Forbes magazine's “30 Under 30” who started the company with the $1,000 he made in tips waiting tables as a college student. As Hayden sees it, the two-day festival – featuring EDM heavyweights like Steve Aoki and Kaskade along with hip-hop and R&B acts like Tory Lanez and Kehlani – is yet another sign of San Antonio’s shifting music scene.

“This is what people like me in the rap scene have wanted for a long time,” Hayden says. “It’s the culmination of a lot of work to build up a better market here.”

In fact, Mala Luna’s debut in San Antonio, and ScoreMore’s ongoing presence here, is one of many signs that San Antonio’s patchwork entertainment scene has evolved in recent years. There’s the Tobin Center, which now draws superstars like Kraftwerk and Morrissey. Next year, the Tobin will partner with the Maverick Music Festival to make that homegrown fest pack an even harder punch. Meanwhile, Paper Tiger moved into the old shell of the White Rabbit, bringing in the promoters behind Fun Fun Fun Fest to book the revamped venue – upping the Strip’s concert game almost overnight. This fall, for the first time ever, San Antonio saw Austin City Limits Music Festival headliners spillover into the local market, all thanks to Live Nation (which has a controlling stake in the company behind ACL) booking the Aztec Theatre. Simply put: more big talent is coming here much more often.

The Mala Luna fest might also be sign of ScoreMore’s evolution. While the company produces well over 100 club shows every year, they’ve jumped headfirst into the festival game in recent years. They created and oversee the state’s roaming JMBLAYA festival, which, over the course of two days this May, drew a reported 28,000 attendees. Gina Martinez, who started El Paso’s Neon Desert Music Festival, says she teamed up with ScoreMore years ago when Stone promised – and delivered – Wiz Khalifa as a headliner.

Martinez says ScoreMore started eyeing San Antonio as a festival spot two years ago after steady success with their club shows here. “By that time, we had traction in San Antonio, we had ticket sales and data proving it’s a viable market,” she said. “And so we figured a festival was the next step.” Martinez started looking around for possible venues to throw a festival-size bash – places like La Villita or Dignowity Park.

Then Martinez stumbled upon the Lone Star Brewery, a hulking 60-acre property that’s sat lifeless on the edge of Southtown ever since the brewery moved its operations to East Texas in the mid-1990s. “It had soul behind it,” she says. “And it was a blank canvas – I thought we could do so much with it.”

At the time, she says, Aqualand Development was still figuring out what its plans were for the property, but were also looking to activate the site and get people excited about it.

Enter Sascha Stone. It seems much of ScoreMore’s success in Texas centers on Stone’s likability and, as Martinez puts it, “all these really interesting relationships he builds with people … Who else earns the undying affection of people like Wiz Khalifa and Kendrick (Lamar)?” Stone says he chatted with Aqualand Founder and CEO Mark Smith and quickly got him onboard – it helped, Stone said, that Smith’s son was into the kind of artists that ScoreMore was booking across the state.

Hayden says he’s cognizant of the fact that some might see yet more out-of-towners looking to disrupt San Antonio’s historically insular music scene. Still, he points to efforts ScoreMore made to ground the festival with local acts – IVY, VI$ION, Greg G, Mitch James, KWYK, among others. ScoreMore even tapped local artist Cruz Ortiz to design a limited edition poster to commemorate the festival’s maiden voyage in San Antonio.

“People are skeptical here, and I get that,” Hayden said. “But I’m from here, this isn’t some ScoreMore conquest.”