What I Ate: That time I went on a juice cleanse

August 11, 2014
comment
Next time I have the fabulous idea of going out on assignment and being extra method about it, can one of you remind me of when I went on a juice cleanse? That'd be awesome. Thanks!

In all honesty, it hasn't been completely awful. The cleanse is part of a story, that'll be out next week, so sit tight. Until that time, here's some photo evidence of all the juice I've been drinking, along with review visits prior to the cleanse.

As always, follow me on Instagram for other food adventures (you know when I start eating again): @JessElizarraras.

Made some migas. Threw in some furikake because reasons. #whatiate 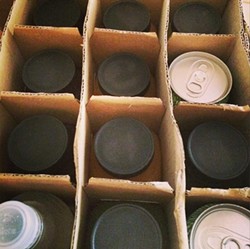 Picked up my juice cleanse. #jessonacleanse Let's see how this goes. My kingdom for a breakfast taco from Mary Lou's.

This is my skeptical face. Gotta make the juice last somewhere between 30-45 minutes, as suggested by the juice dude. #JessOnACleanse #whatidrank

Juice number 2. They accidentally have me the wrong one, nbd, except I shouldn't have any grapefruit. :( switching out the last two. #jessonacleanse #whatidrank

Now I'm just getting sad. Sis will be off for once tomorrow and we can't brunch it up. #jessonacleanse #nomegusta

Bears, beets, battle star galactica. Last juice of the day. I have the hiccups. This one's got pear, melon, red cabbage, beets, kale, Swiss chard and ginger. Tastes like I licked a potted plant. Two more days to go. #jessonacleanse

Breakfast in bed the cleanse way. Down four pounds. There's something ridiculous about that #jessonacleanse #jessmissesfood

Flavor What I Ate juice