What the Spurs Are Listening To Vol. 1

The Spurs' roster is about as eclectic as a Ween record. It's got a little bit of everything. That's one of the things that make the team one of the most enjoyable to watch as well as root for – they're truly a melting pot of nationalities and personalities, and a testament to the ability of a globe-spanning collective to unite and accomplish great physical feats, creating art in motion. That being said, I always find it enjoyable to consider what Timmy, Pop, Tony or Patty, Boris, Bonner, Danny or Kawhi listen to to pump themselves up for 48 minutes of competition.

So, to that end, I have compiled a list of the joints I think our champions are bumping, to get in that mood, dude. 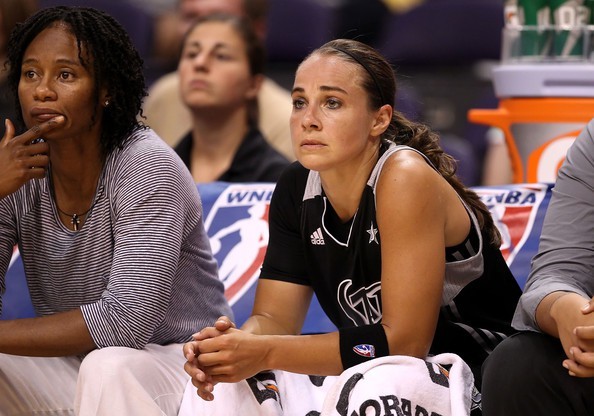 Becky Hammon: "Big Shot Becky" has listed her favorite musicians as: Whitney Houston, Sarah McLachlan, Nicole C. Mullen and Mercy Me in a round of 20 questions. Fortunately, Christian Contemporary music being, to me, quite possibly the most unlistenable saccharine-sweet buzzkill I have ever heard in my entire life (shit makes Matchbox 20 look like Motörhead), I completely ignored the last two mentions and the lady that soundtracks the saddest puppy dog/kitty cat commercials of all time and will focus entirely on our gone-but-not-forgotten model-turned-diva of R&B.

Whitney's cover of Dolly Parton's "I Will Always Love You" gives even the honey-voiced Queen of the Trailer Park a run for her money. The infectious pop-majesty of tunes like "I Wanna Dance With Somebody" or the sass-itude of "It's Not Right but It's Okay" pack all of the infectious wallop of the woman who had the fourth highest points-per-game average (18.8) and the highest assists-per-game average (5.0) in the 2007 WNBA season.

Hammond's naming as the first full-time female assistant coach in NBA history further reinforces her status as a force to be reckoned with. In short, she's the walking embodiment of the final, rafter-raising chorus of "I Will Always Love You." She's also a naturalized Russian citizen, so I like to imagine that she's also grooving to a lot of t.A.T.u. and Pussy Riot, when not bumping the DC Talk or Mercy Me.

Coach Pop: The Man. What does The Man listen to? I may be way off base here, but I envision Pop listening to nothing but Booker T and the M.G.'s, 'cause his coaching record is the statistical version of the ice-cold pimp lean of "Green Onions," Kraftwerk, because it's the musical equivalent of the Spurs' fundamentalist perfection and sonically exhibits the genius of simplicity and the simplicity of genius, and dirty ass '90s hip-hop à la 2 Live Crew or Eazy-E, that's where he gets all that "nasty" talk.

Tim Duncan: The Big Fundamental is easy. The dude with the Merlin pec-tat is bumping heroic, triumphant but not too aggressive, majestic Viking rock. Rush, Steely Dan and The Sword being mainstays in his Sony Discman (he's still got a Discman because he never needed a new one, although he can get testy if Bobo bumps it in the locker room without the digital skip protection on). Can't you just see the greatest power forward of all time in perfect sync with Neil Peart's time warp drum fills in "YYZ" or staring intently into you while keeping steady air drum time on "Tom Sawyer"?