What to Know Before You Go On A Cleanse 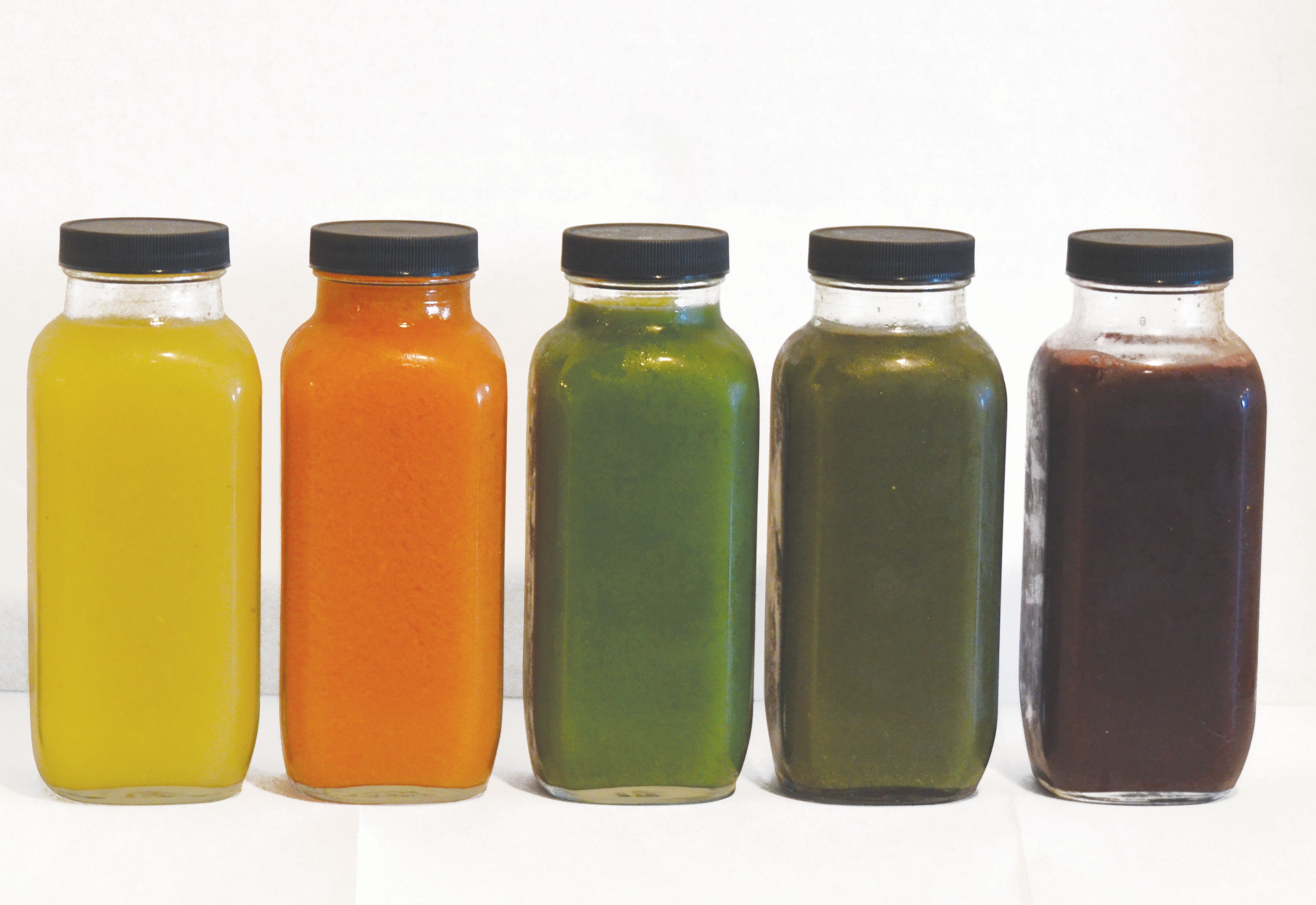 It’s been a year since I’ve taken up this gig of eating and drinking across San Antonio. Since then, no fewer than seven juice shops have opened in the area. And this gaggle of juicers is of a slightly different breed than, say, Jamba Juice. Urth Juice, One Lucky Duck and two Juice Central locations have all opened in the last year; Raw Happiness inside the Wong Grocery building will open in the next few weeks, while the juicers that started it all, Juicer Heroes, have opened two more locations across the city’s North Side. Elizabeth Johnson, chef and former Culinary Institute of America instructor launched Crave Market, and introduced a line of eight-ounce juices to SA. Revolucion Coffee + Juice, which opened in 2012, continues to add to its juicy lineup.

Aside from reporting any new openings and the occasional fruit- and veg-filled purchase, I stayed away from really diving into this topic. As a food writer, the idea of juicing and—gulp—a cleanse was entirely too foreign, especially given the range of health mantras being tossed around: ditch the sugar, ditch the grain, gluten-free is the way to go, moderation is key, the list goes on.

But these shops are out there, and the deluge of juice isn’t stopping any time soon. I decided to cast my fears aside and try out a juice cleanse, hoping to dispel any personal myths about the process along the way. Here’s how my trip through juiceville went down.

For starters, the exact definition of “juice cleanse” seems to vary. Most juice shops will offer some kind of juice cleanse (with the exception of Crave Market) made up of a variety of juices, while cleanses at Juice Central and One Lucky Duck include a variety of small meals or salads. Cleanses at Revolucion, on the other hand, include a selection of dairy-free nut milks, which help supplement protein. My options were wildly varied.

How long I wanted to put myself through this journalistic endeavor was also a caveat—as a food writer and general lover of all things meaty, I had to figure out how long I could feasibly last. Again, options abound. There are one- and two-day cleanses available at Juice Central, while three- and five-day cleanses are available at Juicer Heroes, Farm to Juice, One Lucky Duck and Revolucion. Those brave enough can try seven-day cleanses available through Urth Juice and Juicer Heroes. Angie Carral, owner of Revolucion, shared a tip.

“We recommend you do it when you’re most busy. That way you’re not having to think about what you’ll have for lunch or dinner, there won’t be any distractions,” Carral said. On the flipside, Noah Melngailis, owner of One Lucky Duck, recommends setting yourself up for success by clearing your schedule or making sure you’re not halfway through a cleanse before realizing you’ve previously made dinner plans.

Because my schedule often revolves around restaurant and bar reviews, along with media previews and occasional tastings, I chose to go with a three-day cleanse. I cleared my schedule of any weekend outings, and stayed away from activities that revolved around food.

Monetary concerns also played a part in choosing which cleanse to do. The least expensive hovered at $80, while the most expensive came in at $157. For matters of perspective, I spend $25 on groceries weekly, not including any restaurant or bar visits for work. I chose to commit to a three-day, $99 cleanse via Juicer Heroes, which included five daily juices and a bonus option of alkaline water or coconut water.

Finally, the type of juice imbibed may also be part of the checklist, if not the most important reason to juice. Cold-pressed juices, made using masticating juicers, are preferred as a way to glean maximal nutrients from the pounds of vegetables that go into each blend.

Drew Taylor, part-owner of Juicer Heroes, along with sons Jason and Josh, clarified the process. A centrifugal juicer, the most common type available, which also helps produce the largest and fastest output, Taylor explained, generates heat that nullifies some of the nutrient and enzyme content. Cold-press juicers, such as those made by Norwalk or Omega, which take longer to process the veggies and fruit, don’t. Then there’s the difference between raw juice and pasteurized juice, which is heated and can, again, reduce some of the nutrients. To that same effect, Carral warned against high-pressure processing or pasteurizing, a process that may still nix some of the nutrients found in the juice that, while still technically raw, has a longer shelf life.

“How can it be raw if it’s sitting there weeks or a month on the shelf?” Carral asked.

I placed the order for my juice on Friday and picked up my box o’ bottles Saturday morning. I stopped at Juicer Heroes’ original location (which funnily enough used to house a Popeyes) and asked one of the juicers about my cleanse. How should I take the juices (a handy paper slip with the order of each beverage was procured); how exactly should I drink them (turns out, I couldn’t just slam the juice down—I was encouraged to sip and make the juices last somewhere between 30 and 45 minutes); what should I do if I absolutely had to eat (I could indulge in a small banana, maybe some strawberries or an avocado); was there anything I should avoid (no working out for this gal, as my caloric intake would be low for the day, and hovered just over 1,200 calories). Above all else, I was encouraged to hydrate, hydrate, hydrate. I must have had more than 100 ounces of water that day.

So how was it? Did I see mirages of cupcakes? Did I picture my friends as steaks? Was I bed-ridden? Did I have gnarly trips to the ladies’ room? Not bad, no, no, no (but I did take quite a few naps) and no, but I was a bit gassy. My biggest problem was finding something to do, especially since socializing around food is my mero mole. I did find it difficult to be around food, as a quickie trip to Central Market proved tantalizing, and a meeting I couldn’t get out of featured snacks. I was never terribly hungry, but I was incredibly aware of missing brunch. I suffered a mild headache on day two, arguably the roughest day on my end, but that could have likely happened because I didn’t taper into the cleanse.

Carral and Taylor both recommend taking several initiatives when it comes to preparing for a cleanse. Revolucion’s website suggests “cutting out some things a few days before your juice cleanse begins: wheat, animal products, refined sugar, alcohol, caffeine and nicotine.”

Taylor’s suggestions included subbing in a juice or two as meal replacement five to seven days before the cleanse begins. I did neither, and I may have also had way too much caffeine and chardonnay the night before. In other words, and much to my chagrin, no, you just can’t dive into a cleanse.

While my goal for the cleanse was purely anecdotal, I did do away with eight pounds. And several friends came out of the woodwork, hoping to gain information about the process and whether they could use it as a way to “kickstart” a clean eating habit by alkalizing the body, or as a way to lose a few pounds.

Your goal, be it detox or weight loss, should steer you into or out of a cleanse. Those looking to give their system a reboot (as most juice enthusiasts explain), give it a vacation from breaking down and digesting food, and rid it of any sort of toxins accumulated through previous nutritional habits, would naturally look for the purest juice in the land. This requires a significant amount of homework—be it asking to see the juice-making process, whether the juice is pasteurized or not, how many pounds or servings of fruits and vegetables make up each juice, how much soluble fiber is left behind, whether or not the produce is organic, and how (or if) all this matters to your process.

Aside from tapering in and out of a cleanse—which means I couldn’t have that burger I was dreaming of immediately after my last juice—juicing, or specifically jumping into cleanses, might not be for everyone. People on medications, under a physician’s care for any sort of ailment or illness and food allergy sufferers are encouraged to get medical clearance before committing to a juice cleanse. Pre-diabetics, diabetics and people with autoimmune diseases can still enjoy juice, but necessary amendments should be made. For instance, a kale-based green juice probably wouldn’t be a good idea for anyone suffering from autoimmune illnesses such as Hashimoto’s disease, which attacks the thyroid.

Even then, what happens after you’re through? Did my juice vision quest enable me with inherent knowledge of healthy eating? No.

To help steer folks on a different nutritional path than they might have previously been on, the Juicer Heroes teamed up with Dr. Michael S. Boss, chiropractor and Fellow of the International Academy of Medical Acupuncture, along with an M.D., nutritionists and fitness professionals to create Elevate Life Wellness, an integrative health club off San Pedro. They’re hoping to focus on preventative measures through functional healthcare.

Cleanses at Revolucion were designed in part by Dr. Jacob Torres, chiropractor, who founded the UC4Life Wellness Center, now partnered with One Lucky Duck.

For Crave Market, whose mission uses a full circle approach “driven by community, sustainability and living foods,” Johnson and co. lean on the teachings of Ayurveda, described as a natural way of healing, that provides “guidelines on ideal daily seasonal routines, diet, behavior and proper use of our senses,” according to Dr. Deepak Chopra’s The Chopra Center. Also of note is Crave’s insistence on using minimal fruit juices, as well as the eight-ounce portion sizes, which they argue are more readily processed by the body than larger servings.

If conventional medicine is more your jam, Jan Tilley, registered dietitian and founder of Jan Tilley & Associates, which consulted with Juice Central while the shop structured their cleanses, had this to add.

“Healthy eating is about moderation, it’s not a sexy message, and you might not need to do a cleanse or something as drastic,” Tilley said. Or as Karen Martin, registered dietitian, put it, “If people ate more cruciferous vegetables—like cabbage, Brussels sprouts—they wouldn’t have to cleanse. I call broccoli the broom of the colon.”

It’s a case of (juiced) tomato, tomahto. But this isn’t about vilifying the über-trendy beverage—I did lose eight pounds, I’m wearing jeans I haven’t worn in a year, and my skin looks pretty damn great. When’s the last time you took in five to seven servings of fruits and vegetables in one sitting? Melngailis, the owner of One Lucky Duck, put it best: “We want to be part of the conversation. When it’s 5:30 p.m., your boss has been a jerk, and you’re kind of hungry—what are you going to pick up on your way home? We’re trying to provide another option.”