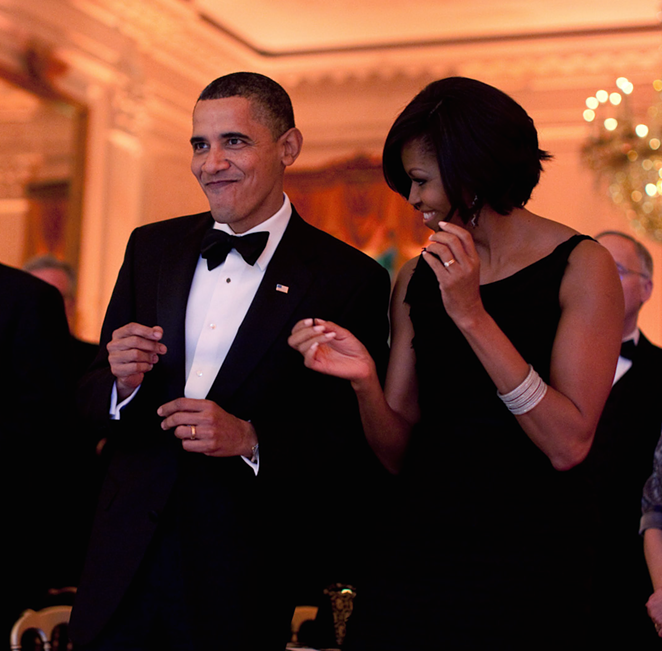 What does POTUS bump when he's not controlling the world with his alien-lizard friends? When the stress of the grind backs him onto a corner? When he's a mile high, feet up, seat back, reclining in Air Force One, the Xanax just kicking in and the Scotch is some George Washington-old shit?

In a recent interview with dumb ol' People Magazine, Obama stated that his favorite song of 2015 was Kendrick Lamar's "How Much a Dollar Cost." This is a trip considering that it samples Radiohead's "Pyramid Song," Barack being the head of the anonymous orgy-having, owl-worshiping Illuminati and all that.

Michelle Obama, who gets to rock the smooth moniker FLOTUS, stated that Mark Ronson's track featuring Bruno Mars, "Uptown Funk" is her favorite. Which is a little basic, if you ask me, but Michelle's gonna do Michelle. Both have been nominated for GRAMMYs, Lamar receiving the most of any artist with 11. So, we're dealing with several options here as to why the man at the top of the political pyramid, the iris of the all-seeing eye, would choose Lamar's tune.

1) He was coached into it by a pop culture-savvy assistant, knowing that the hip namedrop would rope in millennials and hip-hop fans. Especially as the track, although "explicit," is not derogatory towards women, does not glorify violence and isn't "Hotline Bling." It also satisfies the predominantly white college radio crowd due to it's sampling of Radiohead*, further pandering to the constituency that kept him at 1600 Penn Ave. for eight years. Very clever, Barack, not picking "The Blacker the Berry" with all its "my dick is big" swagger, very clever.

2) He is trying to shout out to us from behind the paralyzing facade of Figurehead of the Most Militarized Nation on Earth! It's an attempt to let his fellow Americans know that we are being duped by too-big-to-be-held-accountable institutions of finance and industry! That the pyramid which we all embody and prop up is, in fact, our collective ticket to serfdom!

3) He likes the goddamn song. And why not? It's dope. From the depressing Mingus-as-done-by-Radiohead work song saunter, to the Isley Brothers' velvety swath of smoothness, to the thought-provoking, socially-conscious lyricism.

4) The cover of the record – depicting shirtless, dollar stack and 40 oz.-wielding Black men of all ages, mugging over the collapsed body of what appears to be a Supreme Court Justice (Scalia, possibly/hopefully) – spoke to him and he wanted to big up Kendrick. Let KL know he knows what's up. Incidentally, Lamar name drops Obama in "Hood Politics," also off of TPAB. "Obama say, 'What it do?'"

So, you're left to your own devices as to why President Obama chose the tune as his 2015 fave. I've done the hard work for you, America. Now just fill in the blank with your self-serving, politically-motivated opinion.


*"Pyramid Song" is also said to be influenced by jazz bassist and composer Charles Mingus' "Freedom" off of the classic Mingus Mingus Mingus Mingus Mingus LP. Another ploy to draw in the academic jazz crowd or simply a man liking a song more than the other songs he heard that came out that year?