When the Cook's Wearing a White Paper Hat like at Taco Rey, Trust Him 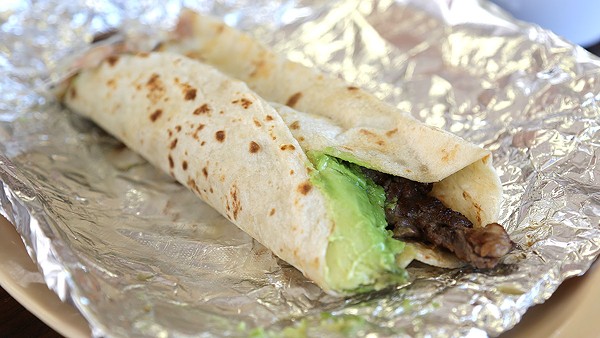 As soon as I saw the white paper hat, I knew this place was legit. The portly cook on the flattop at Taco Rey donned a short order cook hat. The more I thought about it, the happier I became — this cook didn't have to wear the hat, but he does because he's a taco-making badass. And the tacos proved my instincts correct.

The Norteño, for example, was steak, beans, avocado and white cheese in a tortilla that comes wrapped in foil. The steak was juicy, the avocado slices ripe and the beans tender. The flour tortilla had a smoothness and sheen that comes from being warmed on the griddle — the same surface that the meat is cooked. And I loved this.

The menu described the Trash Can taco as "a little bit of everything." It wasn't my favorite but it wasn't because of lack of skill from the hat-wearing chef. I don't prefer egg, beans, cheese, potato and bacon in a single taco, is all. Perhaps the true definition of a breakfast taco, but it wasn't for me.

The bean and cheese I ordered on corn and the tortilla was one of those soft, white-corn, almost flaky tortillas that are common at barbacoa joints. This was more of a bean taco with the cheese in a supporting role, and it was delicious.

The carne guisada was not a traditional Tex-Mex carne guisada meaning I couldn't detect any chili or tomato paste. But rather the stew was more like gravy. Thicker, coagulated but with excellent flavor nonetheless.

It's also important to mention the skill that went into the salsas.

The green was more chopped up green pepper rather than a liquid. And the red was made from toasted chiles (you could tell from the black burnt flakes) but orange, which could be attributed to the adding of oil. Don't mess around with this sauce — it's as hot as any in an SA taqueria. The heat easily makes it way to the bottom of your throat.

Lastly, there was a third sauce that was brought out with a basket of chips. I tasted it over and over because I was trying to figure out its makeup. It was like roasted-tomato based, or perhaps the sauce was cooked later as it was toasty. It had the typical onions and peppers, but also chopped cilantro and green onions. It seemed to have a slight sweetness. Whatever was in it, the salsa was very good.