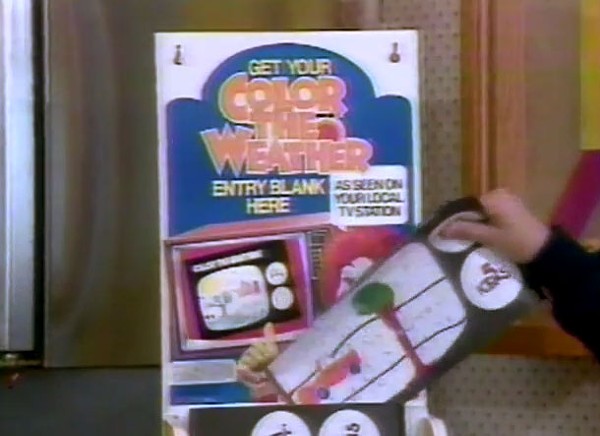 If you ask what I was searching for when I ran across these KENS Color the Weather contest commercials from the 80's, I really couldn't tell you. Their rediscovery is a result of being sucked into an internet browsing wormhole, the type that starts out as a simple Google search and turns into hours of aimless, semi-catatonic link clicking. Usually these sorts of things are a fruitless waste of time, but every once in a while you unearth an online treasure. In this case, it was a glorious piece of San Antonio nostalgia.

If you say "color the weather" to people of a certain age who grew up in San Antonio, it's likely you'll be met with a blank expression that instantly transforms into a beaming smile of recognition.

For the younger readers out there, Color the Weather was contest from San Antonio's CBS affiliate KENS-5 and McDonald's. When parents took their kids to get their Happy Meal fix, children could pick up a coloring sheet from a counter display to draw some weather-related picture. Exactly what kids drew was limited only to their imagination, but usually drawings were of happy suns and happy clouds and happy people, probably because Bob Ross was ubiquitous on KLRN at the time. If you turned your drawing back in to the Color the Weather display, you had a chance to win prizes like McDonald's t-shirts, bikes—I so wanted that bike—and, of course, the prize of every 80's kids' dream, a trip to Walt Disney World.

To find out if you won, all you had to do was tune into the KENS evening news and wait for Albert Flores, the pre-Steve Brown Steve Brown, to display your work of artistic genius during his weather report. If your picture was broadcast, you were the luckiest kid in the world, admired and envied by everyone on the playground for at least a week.

Color the Weather was not something you entered once and forgot about. It was an obsession. You parked yourself in front of the television wishing that Chris Marrou—SA's Ron Burgundy—would hurry it up and hand it over to Flores for the weather. When I was a kid, I was under the impression that kids were supposed to predict the weather with their drawings. My entries were always of dark and stormy days, so when rain came, I knew, just knew, my drawing would pop up on screen. (Seriously, I had devised a whole complicated strategy to win. You should hear my detailed plan on how to get on and win Nickelodeon's Double Dare.)

Color the Weather was everything, but Color the Weather was also a lie. The lure of winning a coveted trip to Walt Disney World was simultaneously a source of hope and an impossible dream. That grand prize, given out maybe once or twice a year, seemed attainable. After all, there couldn't be that many kids in San Antonio entering the contest. But many local kids learned what disappointment was the moment it finally hit them stations all over the country had Color the Weather contests of their own, and only one kid in the entire country would be picked to win. (And I'm not entirely convinced that that kid even really existed.)

If you're looking to be instantly time warped back to your childhood, when things were innocent and life was full of possibility, just watch these two Color the Whether commercials that were unearthed on YouTube.