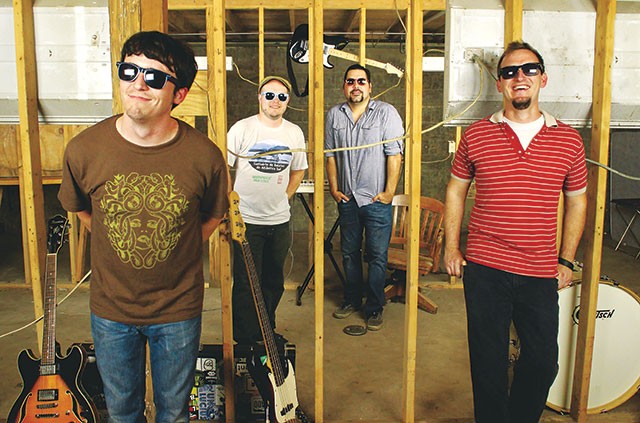 At a time when musical artists, local and otherwise, are increasingly gadget-obsessed and depressingly convinced that the pile-on approach makes their work more interesting, San Antonio’s White Elefant finds their depth and charm in simplicity. Conceived in friendship and born in a one-car garage in 2006, White Elefant carved a faint niche for themselves sporadically playing their simple, organically honed, and sharp-edged indie rock tunes around town. Their sound, as those few who know and love them can attest, is disarmingly straightforward and wry, living off of wandering and anxious electric guitar variations, a fervent and dexterous rhythm section, and Josh Mathis’ comfortingly/sneeringly nasal delivery of his smart lyrics.

“I don’t know whether it’s having the extra person to play off of, or the extra dynamics and sounds on stage or what, but it’s definitely had an effect,” Mathis says of the addition. Mostly finished with their first LP (due this summer) after all these years, White Elefant’s pop-tilted grunge sound has more tenacity and clarity to it than ever — a product of their patient, easygoing approach. “It may take longer,” said Mathis, “but the advantage is that the songs can evolve over time and take on a life of their own.”

Lyrically speaking, the White Elefant catalog is simple, yet nebulous, and represents a solid mix of detachment, confidence, and anguish. After explaining that he writes his lyrics hoping that people will find their own deeper meanings and not be able to pinpoint where he’s coming from, Mathis concedes.

“Now that I say that, I just remembered that one of our songs has lyrics that are basically the indie rock equivalent of a battle rap — passive-aggressive, seething with sarcastic rage and devoid of curse words,” he says. “I’m not going to say which. Maybe it’s all of them.”

The yet-to-be-named LP has all the promise of being one of the best local offerings of the year. Thursday’s show at The Mix is a perfect opportunity to get acquainted with many of its songs, in a setting that befits their frill-free aesthetic. The group’s tight and ever-improving live show is driven by the hope that their music will be their best promotional tool and Mathis’ desire to “surprise people [by] playing something that makes them see, hear, or feel something they weren’t expecting to.”

While the band no doubt hopes shows like this, and others leading up to the eventual album release, will bolster their fan base, Mathis says that they won’t pay too much mind to popularity for popularity’s sake.

“The attention and the encouragement help keep you going, but it shouldn’t be why you show up to practice every week,” he says. “We want to write good songs, have an avenue to share them with people — be it live, a recording, or otherwise — and enjoy ourselves doing it. Anything else is too far out of our control to worry about.”

Here’s to keeping it simple.