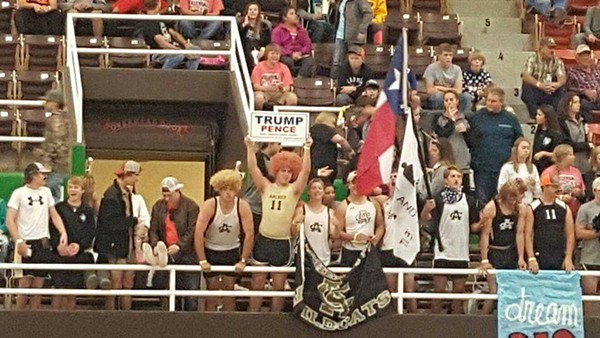 You can now add Texas to the list of states where students from mostly-white high schools have used Donald Trump-themed chants to mock rivals from predominantly Hispanic schools.

During a high school volleyball game last week, students from a North Texas high school started chanting "build that wall!" at the opposing team, which comes from a mostly Hispanic district on the Texas-Mexico border. The students from Archer City, which is just outside of Wichita Falls, also waved Trump/Pence signs – and wore wigs, donned trucker hats and sported fake mustaches for some reason. The superintendent of Fort Hancock's school district, which is about an hour southeast of El Paso, told the Fort Worth Star-Telegram that he was most troubled by the fact that none of the adults at the game tried to stop the chanting. "We come from a very competitive district where there’s plenty of trash talk and that’s just part of the game, having fun with it, but this is the first time it has ever crossed line," he told the paper.

This reaction on social media ultimately went viral:
None of this should be shocking anymore. This kind of thing started happening at high school games all over the country well before Trump's upset victory over Hillary Clinton last week. In fact, white high school kids started taunting their Latino rivals with Trump chants even before he became his party's unlikely nominee for president this summer.

It was in late February this year that students at a predominantly white high school in Iowa goaded a rival district with a student population that's about half Hispanic by chanting, "Trump, Trump, Trump" and "USA, USA." One student later wrote an editorial for his school newspaper saying that it was the fourth time that season an opposing team had cheered "Trump!" at them. To him, it was obviously racial, an allusion to Trump's toxic rhetoric about immigrants throughout the campaign. "It is a chant said to intimidate and discriminate our Latino/Hispanic students and it is a chant that is fueled by racism," the student, Kevin Lopez, wrote.

A few days later at a high school boy's basketball game in northwest Indiana, students at a mostly white Catholic school taunted opponents from a rival Catholic school that's mostly Latino by chanting things like "build a wall," "no comprende," and "speak English." They also waved signs of Trump's face and others that said "ESPN Deportes."

Several weeks later, at a high school soccer match in Wisconsin, some rival students started chanting “Donald Trump, build that wall” at Latina players on the field. Some of the girls were so distraught they left the game. “One of the girls was cradled in the arms of one of our assistant coaches for a good 15 to 20 minutes,” their coach told a local TV station.

And don't forget the Trump-themed pep rallies before homecoming games against more racially diverse districts. Or the fact that, after the election, things have been getting even weirder and more tense on college and university campuses, too. At a press conference with leading Latino groups last week, LULAC president Roger Rocha said he got calls from University of Texas students who told him that after the election, Trump supporters on campus were handing out "Make America Great Again" hats while saying things like "we're shipping your brown ass home."

At Texas State University last week, fliers circulated depicting men dressed in camouflage and wielding assault rifles, with a message calling for “vigilante squads” to “go arrest and torture those deviant university leaders spouting off that diversity garbage.” Denise Cervantes, who writes for the student newspaper, told the New York Times that a student wearing a Trump 2016 shirt spat on her and told her she didn’t belong there anymore.