Why I Would Sacrifice My Firstborn For Merle Haggard 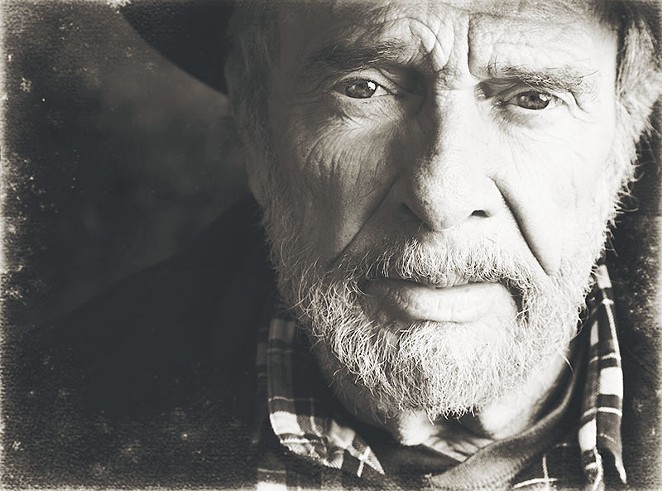 Raised up in a train boxcar, which his father James converted into a home for his growing family, Merle Haggard comes by his grindstone-and-grit roots honestly. As authenticity has always been prided and championed in folk music and subsequently invented, tailored and lied about for decades since the plow was left to rust in the field, and the hillbillies headed to hills of Beverly, Haggard lends incredible credence to the notion that a life of hardship and pain makes for the best artistic output. His real name is also Merle Haggard, possibly the greatest country stage name ever, (some coincidences are just too perfect).

Haggard's father died when Merle was 9 and that's when he "got mad." Over the next fifteen years, he was placed in incarceration on eighteen different occasions, escaping seventeen times. Haggard's true talent, however, lies in his pitch-perfect ability to sing of the common folks' troubles and ailments. He could sing from Are You There God, It's Me Margaret and make it sound like a train-hoppin', parole-breakin', love 'em and leave 'em, tears-in-my-beer anthem.

He's a melodist par excellence, from his earliest tunes, throughout his most recent work. When Kris Kristofferson was attempting to seduce Hollywood, just as he had Nashville - and more specifically its biggest talents - and Dylan had crashed his mojo into the Rock of Ages and was fumbling around with a rotating cast of black female backing trios, Merle was getting off easy, merely suffering from fickle and dated studio production. But the tunes were still there, even if country radio was moving closer and closer towards Van Halen Lite and further away from the royal flush of talent that had dragged them kicking and screaming through the '70s, the melodies and arrangements of tunes such as "Big City; Going Where the Lonely Go; Someday When Things Are Good; Footlights," the entire Chill Factor album and about 15 other heartbroken-by-a-song-title tunes are unbeatable.

I understand that if you've gotten this far in this article you probably are motivated by some sort of connection to Haggard and it's very unlikely you don't know some of his music, but, on the off chance that this is an introduction for you, in the spirit of Reading Rainbow, don't take my word for it. He's the motherfucking best and I'm naming my firstborn after him.