Why San Antonio's Indie Coffee Shops Are Here To Stay 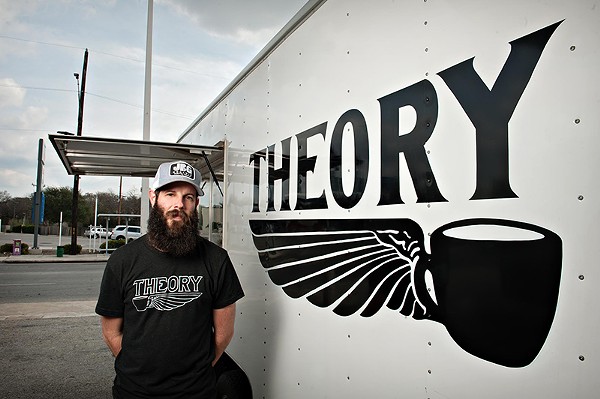 The sign for the Huebner Express convenience store advertises the necessities: coffee, snacks, cold soda and beer. Travel about 10 miles south on I-10 and then east on Loop 410 and you'll pass a shuttered gas station that once sold similar wares. For San Antonio's coffee cognoscenti, these shops have become North Side pilgrimage points — not for what is or isn't available inside, but for who's parked outside.

As the artisanal coffee offerings in SA continue to accelerate, the Indy Coffee Company and Theory Coffee trucks have quietly become two of the best latte slingers on the scene. With shared backstories, ethics and a common mission to bring quality offerings to an under-caffeinated populace, there's no question that these guys are riding high.

Indy is the elder, having first rolled out in June 2014. The brainchild of San Antonio natives Andrew Kim, Alex Lee, Jake Scott and Henry Shri, it operates out of a well-seasoned Ford E-450 van, which Lee and his father outfitted to accommodate all the accoutrements of a coffeehouse-on-the-go. Mark Vollmer, Theory's sole owner and operator, served his first cup from the trailer-turned-cafeteria in February.

Both go mobile for special occasions, but according to Indy barista Kirk Dambra, the best way to leverage the coffee capacity was to spend a lot of time with the gear in park. "We realized coffee is about ritual consumption," he said, "so being planted in the same spot six days out of the week has been great for us." Indy stays by the Huebner Express, across the parking lot from the bonsai vendor, while Theory posts up in the shade of the vacant gas station at the intersection of Loop 410 and Nacogdoches.

As with brick-and-mortar shops, the day starts early. Lee and Scott, who left their day jobs at Local (more on this later) to oversee operations at Indy full-time, start dialing in the machines at 6:30. Vollmer is on site an hour earlier tand is typically packing it in by 3:30 p.m.; for Scott and Lee, their attendant responsibilities for supply runs, product design and build-out on Indy's brick-and-mortar location on UTSA Boulevard keep them busy until 6 or 7 p.m.

There are challenges unique to running a business on wheels, too. Like their food truck brethren, mobile coffee servers face environmental and societal challenges. Triple-digit temps and humidity can make maintaining proper equipment calibration virtually impossible, not to mention sweaty for employees and customers alike. "Summers are rough," Dambra affirmed. "Both us and our patrons will enjoy air conditioning." And there's no guarantee that you'll find a reliable base of cortado lovers beyond the reliable culinary pocket inside Loop 410.

Clearly, it's not just the espresso that's grinding — but at least the hard work is starting to pay off. Both trucks rate highly in the foodie social media realm and they have developed a loyal clientele, some of whom first stopped by out of curiosity rather than devotion to single-origin espresso.

Scott recognized a "certain stigma" surrounding purveyors and partakers of quality coffee — assumptions of snobbery, elitism and an exclusionary attitude towards anyone taking their first steps away from corporate coffee — and emphasized Indy's desire to combat such suspicions with equal parts quality and enthusiasm.

"We love folks that wander up that think we sell tacos or are used to drinking gas station coffee," Scott said. "A lot of people haven't been exposed to the level of coffee that some of the shops in San Antonio are serving and it's an absolute delight to serve, talk to and share with those people what we do and why we do it."

For Vollmer, who holds a degree from the Texas Culinary Academy, the high standards and careful curating he applies at Theory are an extension of domestic tradition. "I had always been in the kitchen at a very young age, helping my mom cook for the family," he said. "It had dual meaning in my life — pursuing the love of being in the kitchen and being in the [food] industry."

Quality is the foremost priority for both trucks in all respects. Indy keeps two roasters in stock: one Texan, one not. Their Lone Star option is Austin's Flat Track Coffee (a partnership secured through Lee's connection to the capitol's BMX biking scene), with Parlor Coffee coming in directly from Brooklyn. Vollmer works exclusively with a Round Rock supplier named Wild Gift Coffee to source his beans. Both make their own house blend of almond milk for the dairy-averse.

That attention to excellence goes beyond what gets poured into cups. As evidenced by Indy's and Theory's Instagram accounts, they've teamed up with local artists to produce apparel and accessories repping their brands.

For Jason Tantaros, who hired and trained Lee, Scott and Vollmer at Local's Stone Oak-Sonterra shop, there is another component to their success. "They're very humble," he said. "Humility [in the service industry] can be pretty rare. With those three guys, it is a very genuine thing. They might be putting on a show in regards to how they execute things but at the base of it, those are three good people with good hearts."

Lee, Scott and Vollmer all credit Tantoros and their tenures at Local with forming their skillset and dedication to excellence.

"We like to refer to that period as the 'Golden Age'," Scott said. "Sonterra was such a unique shop — it wasn't in the 'hip' part of town, but everyone there was so genuine and passionate about what they did."

Scott also pointed out that their effort to boost the presence of artisan coffee on the North West side finds its antecedent in their former employer. "A lot of people don't realize that the Sonterra Local was the first shop. Robby [Grubbs, who founded The Local] was a trailblazer for coffee in San Antonio. Without him, none of us would be doing what we are able to do now."

The camaraderie borne of that shared time behind the counter at Local lingers. Scott, who did design work for Theory, expressed a mutual aim for future collaboration. 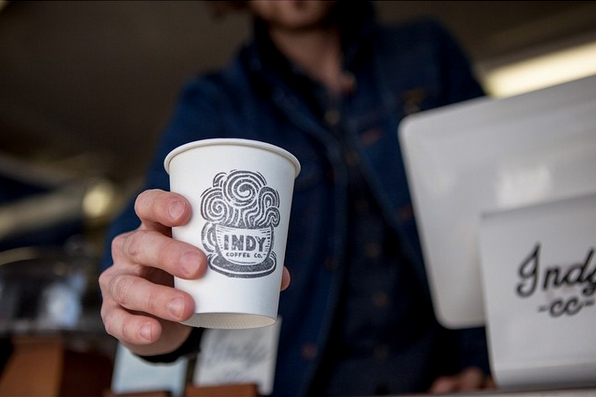 "Mark is one of our good buds," he said. "We want to create the kind of environment and coffee culture where you might see Mark as a guest barista behind the Indy bar one day."

Vollmer concurred. "They're killing it. Their vision of creating coffee culture and community is really rad ... everything I've had from the truck has been rad. The shop build-out is pretty phenomenal. I can't say enough good things about what they're into."

There's more work to be done. Indy's opening day is coming soon. Vollmer is working with local artists to add some murals to the gas station's exterior.

"At 22 my life was all mapped out," he recalled, chuckling. "I was going to get married, get a house, start a business and have kids. Well, it all happened — in a mixed-and-matched way."